Promo Monday: C is for Crichton 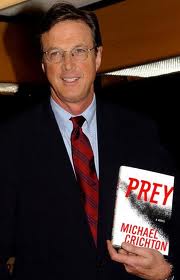 Email ThisBlogThis!Share to TwitterShare to FacebookShare to Pinterest
Labels: a to z blogging challenge, c is for crichton, promo monday

I am also a massive Crichton fan. The Andromeda Strain was the first book I read of his, after watching the film. I found it quite hard-going but so worth the effort!

why do books have so many words... cannot someone tell me the ending.
jeremy [iZombie]

I remember reading Jurassic Park in less than two days, it was that good!

Jurassic Park was the first Crichton novel I read, and I loved every minute of it. I then read Pirate Latitudes. Less impressed with this novel. It felt unfinished and undeveloped. I'm sure it would have been stronger had it not been posthumously published. Good luck with the challenge.

I hanent read his works in awhile. But I enjoyed them when I did. Thanks for reminding me.

wow- he's written many and has some great titles. I'll check him out.

Hmm. I must admit, I've only read NEXT. Maybe I should try some more!

Chrichton was a suspense champion, a great example of a writer who has some obvious weak points but writes books that draw you in and don't let go. Although he couldn't really write characters worth a damn (especially women - yikes), he was chock full of big ideas and a complete master of setting up scenarios that go horribly, beautifully wrong.

I remember reading somewhere that he started writing novels as a way to pay for medical school. I mean, who can pull that off? Amazing. He also created the tv show ER.

In interview, he seemed like a great guy. I think he was taken way too soon.

Hi!
I've never read any of his books. Now I'll have to read his books. Have a great day!

I admit I haven't read any of Crichton's works as of yet, but I too couldn't believe it the day he'd passed away. His was a tremendous loss for the publishing industry. While there may be new authors to offer something in Crichton's absence, the world will never be the same again without this literary juggernaut.

He was an amazing writer and the literary world is not the same. Terrific post on a wonderful author who opened the imagination of millions.

I have read the bulk of his books, some of them more than once. Great writer indeed

I read Sphere last summer and thoroughly enjoyed it. Jurassic Park, not so much. The Great Train Robbery on audiobook was pretty good.

What a great tribute. I love your choice for 'C'

*hangs head* I shamefully admit I have never read any of these books. I obviously need to. Just by the titles they seem awesome! :)

I am also a huge fan. What a creative 'c' post. I had not even thought of doing a post on my favorite author's...

I've read Airframe, which I liked. Hmmm. I wonder why I haven't picked up more Crichton?

Wonderful choice for C. Great job. Thanks for the list, too.

I love his books... I've only read about half of them... so I'm planning on spreading them out.