Today we have a special guest with us bringing her #fridayflash. Terri Talley Venters writes Elements of Mystery, and her debut novel Carbon Copy was recently released.

Ida ran late for her 11 a.m. tour of the Ponce De Leon hotel in St. Augustine, Florida. She only needed to descend three flights of stairs to get from her corner room in the tower to the start of the tour in the grand entrance. But today, as most days, she needed to drag herself out of the bed.
She cursed herself for staying up so late dancing and drinking with her friends. Her husband, Henry, yelled at her and made her go to her own room before the sunrise. “But this is the beginning of the season. I want to stay up and watch the sun rise at the Castillo de San Marcos,” Ida recalled pleading her case.
Ida looked down at her ivory lace dress and admired the intricate stitching of her new frock. She noticed her corset cutting into her ribs. She never remembered putting it on this morning, nor did she recall removing it last night. These lapses in her memory concerned her, but not as much as they concerned her husband. She found huge blocks of time, hours or days, often unaccounted for. She blamed the spirits for this, while Henry blamed the opium.
She felt the brooch at her throat and wished she had a mirror in her room to ascertain if her appearance proved acceptable for society. Damn you, Henry. Why did you take my mirror away? I’m not crazy, I won’t hurt myself.
Ida found her way to the grand entrance to find the tour already in progress. Stephanie always spoke during the tours, while Ida merely helped guide the crowd of guests throughout the hotel. Ida tried to speak on occasion, especially when Stephanie said something wrong. But Ida’s corrections were always met with strange looks, like she was crazy.
Ida spotted the group outside in the courtyard as Stephanie said, “Notice the centerpiece of the fountain is actually the hilt of the sword turned upside down.” Ida smiled at the beauty and uniqueness of the fountain in the courtyard of her husband’s famous hotel in Florida.
She watched the group pour back inside the grand entrance. Ida looked in horror at the wardrobe of the hotel’s guests. She’d never seen the latest fashions from Paris, but it shocked her to see so many women showing their knees.
Ida followed at the rear of the group as they turned right into the receiving room. Ida loved this room because it was the only one which never changed. And the beautiful Tiffany Chandeliers hung magnificently down the long length of the room. Her favorite part of the tour was next.
“When guests first arrived at the Ponce De Leon, the women and children were brought in here while their husbands paid for the hotel. Back then, woman were not allowed involvement in financial transactions,” Stephanie said.
“How much are these Tiffany chandeliers worth,” a guest asked.
“The Ponce De Leon hotel converted to Flagler College in 1968. Many items were sold, but not these chandeliers and the stained glass windows. We had these chandeliers appraised a few years ago, and because of their rarity, they are truly priceless. The Tiffany stained glass windows upstairs in the dining hall were appraised at $36 million,” Stephanie said.
Stephanie led the group to the other end of the long room. She pointed at the glass casings containing photographs of Henry Flagler and his family.
“Here is a photograph of Henry’s first Wife, Mary Harkness. She died young and Henry married her nurse, Ida Alice Shroud, who is photographed here. Henry had Ida declared insane and kept her locked away in the tower until she was institutionalized in 1899. In 1901 Florida passed a bill making incurable sanity grounds for divorce. Henry immediately divorced Ida who remained institutionalized until her death in 1930. In 1901, Henry married his third wife, also named Mary, who is photographed here,” Stephanie said.
“It’s a lie! I’m alive and I’m standing right here. I’m not dead and I’m not crazy,” Ida shouted.
All of the guests in the room heard her this time. They all turned and looked at Ida. But they didn’t seem to be looking at her, they looked through her.
“Did anyone else hear that? I thought I heard someone screaming right in front of me,” one of the guests said.
“I heard something too. And it is freezing right here in this spot. Look, I can see my own breath,” another guest said. She exhaled her breath into the air to demonstrate it turning into white smoke from the cold.
“It’s from the nitrogen in the air. When ghosts appear, they carry a strong dose of nitrogen with them. It’s what makes it feel so cold when they’re near,” Stephanie said.
“Excuse me, did you say ghost?” the guest asked, instinctively stepping away from the cold spot.
“Yes, Flagler College is haunted. One of the spirits is Henry’s second wife, Ida Alice Flagler.” 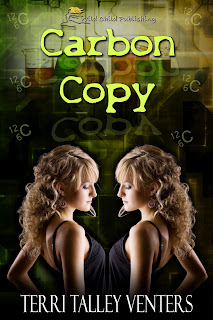 Lilly Allen has brains, beauty, and a trust fund. She's living in New York City and her career as a reporter is taking off. She's hoping the love of her life, Grier, will propose soon. She has it all, or so she thinks.

Grier Garrison, Create Life executive, is running the company while his father, Dr. Michael Garrison, is in the ICU awaiting a heart transplant. Grier knows the truth about Create Life and its shady side business. He fears Lilly and her twin brother, Luke, are in danger.

While working on two unrelated stories, stolen newborns and cloning, Lilly discovers a shocking connection. Horrific things are happening, but who is behind it all? 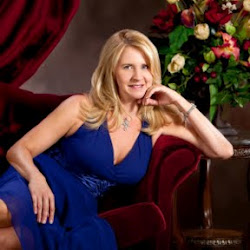 Terri received her Bachelor’s degree in Accounting and Master’s degree in Taxation from the University of Florida. She is a licensed CPA and a Second Degree Black Belt in Taekwondo. She lives in St. Augustine, Florida, with her husband, Garrison, and their two sons.
Carbon Copy is the 1st thrilling novel in the Elements of Mystery Series. The title of each novel will contain an element from the Periodic Table of Elements. Terri recently finished writing Tin Roof, the sequel to Carbon Copy, coming soon from Wild Child Publishing. And Terri’s romantic/suspense novel, Body of Gold, is coming soon from Freya’s Bower. For more about Terri’s upcoming releases, please visit her website http://www.elementsofmystery.com/
On the first of each month, Terri also posts free short stories on her blog. Follow her at http://www.territalleyventers.blogspot.com/as she weaves her way through the Periodic Table of Elements.

Thanks so much for having me today! Nitrogen is my favorite short story in my elements of mystery series, so far. I'm actually going on a ghost tour in St. Augustine tomorrow night. Boo!

Cool flash, Terri. Your drug of choice (for the story) makes a nice & not obvious clue. ;)

Thanks for the credit, but I chose the drug because Ida Flager was supposedly an opiate addict. Glad you enjoyed by story! Thanks for stopping by Inebriate =)

Flagler college (the old Ponce DeLeon hotel) is beautiful. All the appointments mentioned a real. I toured it a few year ago. It's thrilling to write a story set in the city I live in. =)

Great flash piece, Terri! Thanks for sharing it with us.

Nice to meet you Christine! I love writing ghost stories. Glad you enjoyed my story. Thanks for stopping by=)

I love that flash piece! I live close to St. Augustine and try to visit every few months. It's such a great little town for ghost stories :)

Ooh, I love a good ghost story. And I like that this takes place in Florida.

Nice to meet you Heather and Medeia! I just went on another ghost tour in St. Auguestine last night with the cub scouts. the ghost of Ida Alice Flager still roams the female dorms (which is where her rooms once were) she's been known to destroy make-up of the female coeds because it's provactive. Glad you enjoyed my story. Thanks for stopping by!