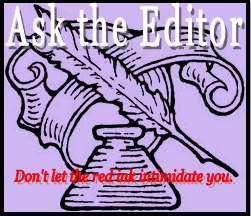 Every 1st and 3rd Thursday, I'll take your editorial questions. Grammar, spelling, punctuation, sentence structure and more! I will showcase questions and answers (with permission) once I get questions as well. To ask a question, please fill out the form below.

I've been a freelance editor since November 2010. If I don't know the answer, I will find it.

Clarissa Draper asks "How do you remember the difference between "effect" and "affect"?

"Effect" as a noun tends to mean "a result" as in "cause and effect."

"Affect" as a verb tends to mean "to influence."

The rare uses of "affect" and "effect" are where the confusion comes in even more. In psychology "affect" can be used as a noun as in "She displayed a happy affect." It involves the mood someone appears to have.

"Effect" as a verb means "to bring about" or "to accomplish." Such as, "The President effected changes within the administration."

Except for the rare cases of "effect" as a verb, I tend to think "cause and effect" on whether to use "effect" or "affect." If I can say the sentence or situation before was the cause, then the result is the effect.

When editing other people's work, I always pause at "effect" and "affect." I decide if they are using it as a noun and verb and then apply the meanings already stated.

Christine Rains asks "Do you find editing your own work any easier now that you've been editing other people's?"

Great answer, Christine. Editing my own work is easier since I've become an editor, but it is also harder since I'm now aware of so much. With other people's writing, I'm looking for consistency, awkward phrases, grammar/spelling, storyline, etc. I look for those things too in my story, but I can't change much of the writing in the stories I edit. It's not my writing. They have different ways to say things, so I can make suggestions for a better verb here, fixing passive voice, or marking "show, don't tell," but I can't change those things about an author's writing. In my own, I can, so I sometimes agonize over the right word or how to show an emotion instead of tell it. I find it takes me twice as long to edit my own work than another person's for those reasons.
Posted by Cherie Reich at 8:00 AM

Email ThisBlogThis!Share to TwitterShare to FacebookShare to Pinterest
Labels: affect vs effect, ask the editor, editing

I found both these questions and their answers extremely useful. It's nice to have a categoric answer re: effect and affect, so thanks!

I use to have a lot of problems with affect and effect. Now I just try never to use effect as a verb!

I have a couple of awards for you, but I see you've already popped by this morning! :)

"affect" and "effect" are a real stumper for me.

What a fantastic idea, Cherie. Thank you so much for this - I'm sure I'll learn a lot!

I have the hardest time teaching my students the difference between affect and effect. I think my new approach is going to be to tell them that affect and effect have been banished from the English language.