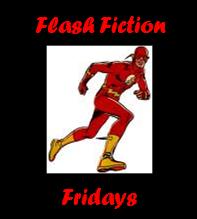 M is for Murder
Jill's lip stung from the punch. Anger and fear rushed through her veins and sent tingles along her spine. The man sprawled upon the ground. She wanted to run away, but instead she crept closer to him.
He reeked of booze, and her stomach turned. She tasted bile upon her tongue and almost gagged. He still lived. She detected the faint signs of his chest rising up and down. When he shifted, she jumped. If she'd been a cat, her fur would've puffed out.
His groan sent her scrambling, searching for the knife. It gleamed in the moonlight, and she grasped hold of the handle. It was rough, sturdy, secure in her hands.
The man sat up. His eyes appeared crossed, as if he had a difficult time seeing her. She flashed the knife, and they focused.
"No, please." He slurred his words. His body swayed from his drunken state.
She could run, but she didn't. Cold certainty seeped within her. She lunged and stabbed. The knife met resistance, but the force of her body dug it through skin, fat, muscle. The man screamed while she plunged the knife in again and again.
When his breath stopped, she did too. Her hand slipped off the blood-slicked handle, and she rummaged in her pocket before pulling out her cell phone.
She took a deep breath while dialing 9-1-1.
"9-1-1, what is the emergency?"
"He came at me with a knife. I-I think he's dead now. He tried to kill me." She rattled off the address before screaming and hanging up.
She felt herself smile, and a burble of a giggle erupted from her. It was so easy.
Every time.


*If you like writing flash fiction or want to try your hand at it, don't forget about my Flash Fiction Blogfest on May 6th. For more information, click here.*
Posted by Cherie Reich at 8:00 AM

Email ThisBlogThis!Share to TwitterShare to FacebookShare to Pinterest
Labels: a to z blogging challenge, flash fiction, m is for murder

Nice twist! You wouldn't expect that behavior from a girl lol.

You really have a way with the twisted and creepy! Great work!