Riddle Me This Answers and Winners | Bookworm News | Writing Update 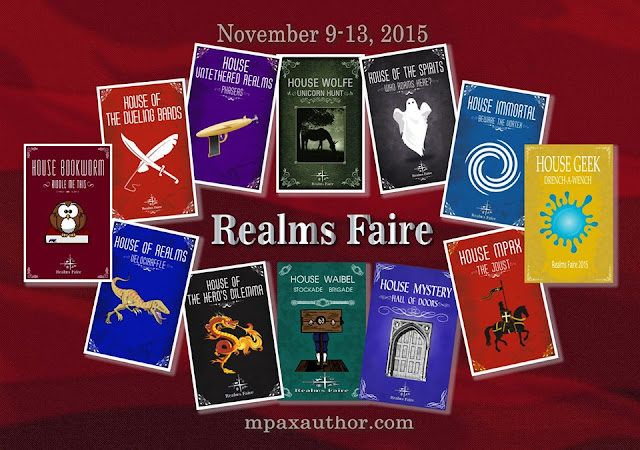 The Realms Faire is over. I hope everyone had a fun time. I have the answers and winners to the Riddle Me This riddles. Thank you so much for playing and congrats to the winners! 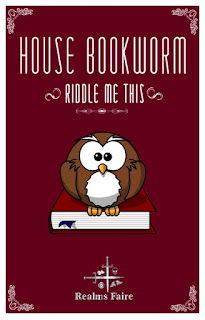 A summer job at the amusement park Joyland turns out to be more life changing than Devin Jones ever anticipated in Stephen King's Joyland. This novel unravels the mystery of Joyland and a girl's murder that took place there. Although there is little horror and the suspense is a very slow build, King excels in the characters he creates. I cared about Devin and the others in the book. The colorful and secret "Talk," the carnival language, added to the dialogue and the setting. Despite the slower pace than you typically find in thrillers/mysteries, Joyland by Stephen King kept me glued to the pages.

Clare McKinney seeks to prove her theories about poltergeists are true no matter the price in Christine Rains' Poltergeist's Pleasure. Clare is one of the Paramours--ghost hunters who use sexual energy to interact with ghosts. Her beliefs concerning poltergeists and sex have a way of getting Clare in a lot of trouble, but through her interactions with Zendal and her fellow Paramours, Clare finds a way to grow. Be prepared for one steamy read. Rains has struck a great balance between the erotic and a romantic, fast-paced story. For ghost hunting with a steamy twist, look no further than Christine Rains' Paramours series.

BOOKS RELEASED IN NOVEMBER
Warren the 13th and the All-Seeing Eye by Tania del Rio | Wolf Winter by Cecilia Ekbäck | How to Be Brave by E. Katherine Kottaras | Fright Before Christmas by Various Authors | Need by Joelle Charbonneau | The Beast of Barcroft by Bill Schweigart | Orphan’s Blade by Aubrie Dionne | Something in the Air by Marie Landry | True Grift by Jack Bunker | For the Dignified Dead by Michael Genelin | The Last Good Place by Robin Burcell | Whistling Women by Kelly Romo | Home by Nightfall by Charles Finch | Falling for Her Enemy by Victoria James | His Pirate Seductress by Tamara Hughes | To Dare a Seal by Sara Jane Stone | Once upon a Power Play by Jennifer Bonds | Sweet Ride by Cathryn Fox | The Lost Soul of Lord Badewyn by Mia Marlowe | The Highlander’s Accidental Marriage by Callie Hutton | Mind: The Beginning by Jenn Nixon | The Alpha’s Temporary Mate by Victoria Davies | Her Witch to Keep by Zoe Forward | Beauty and the Boss by Diane Alberts | Come to Me by Oberon Wonch | Forget Tomorrow by Pintip Dunn | The Revolution of Ivy by Amy Engel | Battlefront: Twilight Company by Alexander Freed | The Shock of Night by Patrick W. Carr | Lady of Intrigue by Sabrina Darby | Tell Me You Need Me by Joya Ryan | Hidden Away by Jennie Marts | The Hometown Hoax by Heather Thurmeier | I Do by A.J. Pine | Death Before Decaf by Caroline Fardig | A Pain in the Tuchis by Mark Reutlinger | Now We Have Secrets by W. David Smith | The Locket by B.G. Cousins | Paper Hearts: Some Writing Advice by Beth Revis | Kissing Her Crush by Ophelia London | Dying for Keeps by Seleste DeLaney | Irresistible Deceptions by Mackenzie Crowne | The Greek’s Stowaway Bride by Alexia Adams | #Heart by Cambria Hebert | Paint My Body Red by Heidi R. Kling | Abby and the Cute One by Erin Butler | How to Lose a Bachelor by Anna Banks | Designed for Murder by Avery Flynn | The Queen's Flight by Jamie K. Schmidt | Ice Moon by Lisa Kessler | The Billionaire's Christmas Proposal by Victoria James | Embraced by Jus Accardo | Dying for Keeps by Seleste DeLaney | Stop in the Name of Love by Nina Bruhns | Chance of a Lifetime by Marissa Clarke | Blurring the Lines by Marisa Cleveland | How to Fall by Rebecca Brooks | Soundless by Richelle Mead | Lovelorn Spirits by Christine Rains | A Cold White Fear by R.J. Harlick | Invisible Wounds by Dustin Beutin | Sirens in the Night by Michael Bradley | The Lost Codex by Alan Jacobson | Unbroken by Michelle D. Argyle | Neverseen by Shannon Messenger | Calling Her Bluff by Kaia Danielle | Compromising Her Position by Samanthe Beck | The Royal Conquest by Stacy Reid | Sweet Nothing by Jamie McGuire | Angels Twice Descending by Cassandra Clare | The Bazaar of Bad Dreams by Stephen King | Crimson Shore by Douglas Preston and Lincoln Child | A Year of Ravens by Ruth Downie | The Candy Cane Cupcake Killer by Livia J. Washburn | Fate of the Union by Max Allan Collins | All In by Jennifer Lynn Barnes | 9Tales Told in the Dark #7 by Various Authors | Christmas in Good Hope by Cindy Kirk | The Short Drop by Matthew Fitzsimmons  The Gateway to Fourline by Pam Brondos | The Burned Bridges of Ward, Nebraska by Eileen Curtright | Sleeping Embers of an Ordinary Mind by Anne Charnock | Soul Breaker by Clara Coulson | How to Bewitch an Earl by Ally Broadfield | The Haunted Realm by Emilyann Girdner | Ascendancy by Karri Thompson

I've been asked how I keep track of new releases. It's rather simple. I have a Word document for the year, and as soon as I discover a book's release date, I add the title and author under the month the book will be released. I keep adding books until the day before the post goes live.

In this riveting continuation of the story, Araina again faces a series of seemingly impossible magical obstacles. As Araina and her friends search for answers about their Creators and their magical labyrinth world, their journey becomes rife with peril when Araina falls victim to illness. Despite heart-pricking losses in the labyrinth swamps, vengeful ghostly attackers in the Blinking Willows, and many other dangerous obstacles, Araina is determined to succeed. If Araina can’t solve the mysteries of the haunted realm and find a cure for her sickness, she and her friends may never escape the labyrinth, or even live to try.

Stay Connected to the Series via Websites and Social Media:
Use this Facebook link to sign up for the newsletter
www.obsidianseries.com
www.emilyanngirdner.com

Happy Monday! Since next Thursday (November 26) is Thanksgiving in America and I'll have a few days off from work, there will be no fourth Wednesday post. My next post will be the IWSG post on December 2.

I've still been writing every single day since July 1. I keep expecting to wake up and discover all those words were nothing more than a dream. Writing-wise, my focus has been on Forged and the bonus woodwose section for The Fate Challenges boxed set. As of today, I have fourteen chapters left to write in Forged and five scenes in the bonus woodwose section, and I've been averaging over 1000 words between the two projects within forty-five minutes.

My other goals haven't come together quite as well as the writing. I'm still hoping to make progress with edits for Marked, the read-through and notes of The Mission, and outlining Soul Reaper series, but we'll see how the rest of the month goes.

If November goals are completed, I will also add these items to my December goals:
Edit "On Day 168" and send to my first critique partner.
Start researching and outlining The Gaia Project serial.

What are your December goals?

Or Monday, this time. Read Reborn from the beginning or Chapter Thirty-Seven. One more chapter to go!
Posted by Cherie Reich at 8:00 AM

Whoa, a lot of books were released this month! o_O

And congrats on all the writing! That's great how you've been able to turn it into a daily routine. Best of luck with your December goals!

Congrats to all the winners!

You have your December goals already! Best of luck with them.

Congratulations to the winners!
That's awesome you write every single day.

Congrats to the winners. I agree with Alex. How awesome you've been writing every day.

I won during one of your days and you won my big package - how fitting!

Congrats to all the winners! And to Emilyann too. I wondered if working in a library helps to keep track of so many books.

Congrats to the winners! And that is a HUGE list of books released this month. I could never read all of them. lol

Good luck with your December goals!

Congrats to the winners!

I need to get Christine's book. Sounds amazing.

Wow! There were so many book releases this month, that's amazing. Congrats to everyone. And that is awesome that you write every day Cherie, you are so very inspiring. I think that would be a good goal for me.

Thank you again so much for mentioning The Haunted Realm. :) You are so kind. <3<3

The Realms Faire was a lot of fun, even though I looked in from the outside!

I love that you keep track of the new releases. That's exactly how I keep track of the links I come across to post on Wednesdays. I already have items on the spreadsheet for fall next year! Good luck with your goals!

Congrats to all the winners! And thank you for the awesome review. It's amazing that you've written every single day. Enjoy your long weekend coming! :)

Yay for the winners! It was such a great Faire, what I saw of it.

December goals... Survive the holidays. =) I'm actually hoping to finish a book in the next month, but who knows. It should have been done six months ago. Oops.

Congrats to the Faire winners. And good book reviews of novels I really want to read!

Congrats to the winners. I want to start reading King again. I haven't read him in a while. I'd also like to dig into Christine's new books. Happy writing.

Lots of releases! I was wondering how you kept track of them all. :) I am so glad you have been getting so much writing in over the past 5 months. Bravo!

Yeah for all the winners too!
~Jess

Looks like some satisfied winners:) I've read a few of those books, but now I want to read the others:)

Congrats to all winners. And thank's Cherie for the reviews. Some great reads out there. My list TBR is ever growing. Have a lovely week.

Wow that is a lot of books this month. Congrats to all the winners.

I have been writing pretty much every day. I really want this MS done by Dec.

Once I finish I plan to reevaluate my goals for the coming year.

Congratulations to all the winners! Such a lovely list to feed our book habits this month! Awesome!

Congrats to the winners. I liked reading your reviews of books and the list is great.