BOOKS READ
Mayhem in the Air by Untethered Realms authors (including me!)
Ghost Dancer by Christine Rains
A Faerie's Revenge by Rachel Morgan
Wonderland by Jennifer Hillier

Nina Azure helps spirits move on, but when she comes across Ben Moore's ghost, she's all too eager to keep him earthbound in Christine Rains' Ghost Dancer. Nina is part of a three-person team called the Paramours, who use sexual energy to help ghosts carry on to the afterlife. This novelette focuses on Nina and Ben. Nina is a beautiful character who knows she must do the right thing, even though her heart says otherwise. I loved the imagery of the drums and heartbeats. Ben is definitely a match for Nina, and his story tugged on my heart. Their chemistry was smoking and tinged with sadness. Rains balances the erotic with sweet romance. The first book of the Paramours series, Ghost Dancer by Christine Rains adds a unique twist on ghost hunting and is a perfect adult bedtime read.

A Faerie's Revenge by Rachel Morgan

Discovering Chase's secret was only the beginning for Calla Larkenwood in Rachel Morgan's A Faerie's Revenge. Calla shows a lot of growth through all she faces in this book. The dialogue between Calla and her Guardian friends often had me laughing. Certain instances in this book brought me to tears, and there is this really swoonworthy scene, but you'll have to read it for yourself. A Faerie's Revenge keeps the action high, the pace moving swiftly, and feels like a solid bridge between not only A Faerie's Secret and the next book in Calla's trilogy but also between Violet's story in Creepy Hollow 1-3 and whatever the last trilogy will be about. Rachel Morgan knows how to keep the twists coming. This novel gave me a book hangover. I didn't want it to end, and I am so looking forward to the next book. If you're a fan of the Creepy Hollow series, then you'll love A Faerie's Revenge by Rachel Morgan. And if you haven't read the books yet, then I highly recommend you to start at The Faerie Guardian and catch up.

Vanessa Castro's first day as Seaside's deputy chief starts off less than wonderful in Jennifer Hillier's Wonderland when a dead body turns up at a local amusement park called Wonderland. Told from various view points, this novel amps up the tension as each person adds to the mystery and intrigue of the story. I didn't know quite who to suspect as the persons of interest list expanded. Seaside seems like one of those quaint little towns on the surface, but the crimes let the reader know no town--big or small--is safe. I rather enjoyed the creepy atmosphere of the park Wonderland, particularly on its Elm Street with the Clown Museum. The park itself became a character and a wonderful one at that. I was excited to see an old character from Hillier's other books appear in this one too. The tension increases to a killer ending. Wonderland by Jennifer Hillier kept me turning the pages and is a suspenseful read. 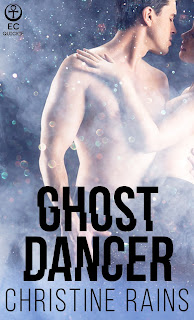 The Paramours - ghost hunting with a kiss.

When Nina Azure’s talent as a ghost dancer doesn’t persuade a handsome phantom to talk, she entices him with sizzling sexual energy. Ben Moore’s spirit is tied to this world with guilt, but he breaks his self-imposed silence for the beautiful Nina. Lust makes him fully physical and she loses herself to desire. She must help him carry on to the afterlife, but her attraction to him is immensely powerful. She must push aside her own feelings and let him go—and perhaps find romance among the living.

Christine Rains is a writer, blogger, and geek mom. For more information, visit her website or blog.

BOOKS RELEASED IN OCTOBER
Mayhem in the Air by Untethered Realms Authors
Wonderland by Jennifer Hillier
The Clasp by Sloane Crosley
Playing with Fire by Tess Gerritsen
A Blossom of Bright Light by Suzanne Chazin
Wolf by Wolf by Ryan Graudin
We’ll Never Be Apart by Emiko Jean
An Inheritance of Ashes by Leah Bobet
Pop Goes the Weasel by M.J. Arlidge
Illuminate by Tracy Clark
The Kill Box by Nichole Christoff
Mrs. John Doe by Tom Savage
Fanatics by Richard Hilary Weber
Dark Screams: Volume Five by J. Kenner, Bentley Little, and Mick Garris
Ignited by Liz Long
Ward Against Destruction by Melanie Card
Cinderella’s Shoes by Shonna Slayton
Touching Fate by Brenda Drake
Jane Unwrapped by Leah Rooper and Kate Rooper
The Unfortunate Decisions of Dahlia Moss by Max Wirestone
Snow on Cinders by Cathrina Constantine
The Engagement Game by Jenny Holiday
Gambling on the Bodyguard by Sarah Balance
Kissing Her Crazy by Kira Archer
Wild Ride by Cathryn Fox
The Prettiest One by James Hankins
The Girl and the Bomb by Jari Järvelä
Hot Sur by Laura Restrepo
Still Waters by Viveca Sten
A Land Divided by K.M. Ashman
A Cold War by Alan Russell
Guaranteed Heroes by William Lashner
Return to Christmas by Kathi Macias
Say You’ll Love Me by Ally Broadfield
Prisoner of Love by Cathy Skendrovich
Lost in Tennessee by Anita DeVito
The Moonshadow’s Daughter by Kaylie Newell
Sidekick by Natalie Whipple
Her Accidental Husband by Ashlee Mallory
Seducing Seven by MK Meredith
A Moment of Weakness by Brooklyn Skye
His Fantasy Girl by Nina Croft
Playing with Fire by Alison Bliss
Slade House by David Mitchell
Children of the Comet by Donald Moffitt
Hell Bound by Andrew P. Weston
The World of Evendaar Book Two: The Queen Revealed by A.R. Winterstaar
Played by Clare James
Tempting the New Boss by Angela Claire
Double Down by Victoria Pratt
Friendly Arrangement by Christine Warner
His Temporary Fix by Sofia Grey
Damage Control by Jess Anastasi
Shifter Planet by D.B. Reynolds
The Kill Box by Nichole Christoff
Shadows of Self by Brandon Sanderson
The Iron Warrior by Julie Kagawa
Born to Endless Night by Cassandra Clare
A Faerie's Revenge by Rachel Morgan
The Best American Science Fiction and Fantasy 2015 by Joe Hill and others
A Pet for Christmas by Rachelle Ayala
Christmas at Cranberry Cottage by Talli Roland
Forever Lucky by RaShelle Workman
Poltergeist's Pleasure by Christine Rains
The Wishing Steps by Karen Helene Walker 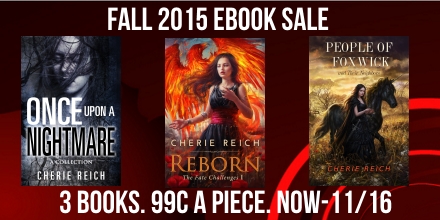 From now to 11/16, you can purchase Once upon a Nightmare: A Collection (paranormal horror), Reborn (YA epic fantasy), and People of Foxwick and Their Neighbors (epic fantasy short stories) for 99 cents a piece.
Click here for purchase links.

Here's the deal, all you need to do is visit the Rafflecopter page and enter. It's as simple as that. At the end of the month one winner will be randomly selected to win an e-book copy of all five books.

Congrats to Christine on her new book. Sounds like a great ghost story. Wow! So many books have come out. Not sure how you keep track of them all.

Thanks for the great review and shout-out! Hope your sale is going good. :)

You read some good books! Amazing how you keep track of the releases.

Ooh! Lovely reads... Must have them all!

Thanks for the reviews. More and more titles to be added to my TBR list. I'm going to have to live forever just so I can read them all.

Great reviews! I knew of Ghost Dancer, but the others are new to me. And wow, what an awesome sale on your books! Hope it helps you gain a lot of new readers, Cherie! :)

Congrats to Christine on her new book, sounds interesting and intriguing!

I need to pick up Christine's book. Or maybe I already have and just need to read it. I can't recall currently, but I do know I want to read it. It sounds awesome.

I need to read Christine's new one. She writes a great story. Wow, what a list of books out.

That's a great list of books. How do you keep track?

Christine is the example of the sort of self-published author we all need to strive to be. It seems like she's always publishing a new book! Congrats to her for another one. ;)

Congratulations to Christine! So many awesome new books!

I haven't read those three books, but I've read other books by those authors. I'd like to read the ones you featured. Great reviews.

Haven't read the books yet, but I'm a fan of Christine and I know Rachel via blogs. All sound like fun.

Thanks for promoting the giveaway.

Congratulations to Christine on her new book. All sound good.

You make my head spin, Cherie. These are great reviews and so glad you shared them with us.

Congrats to Christine on her new book. Sounds like a great ghost story. And all the books sound great.