John Chatterton and John Mattera stop their quest in finding a treasure ship and seek out the legendary Golden Fleece, the pirate ship of Joseph Bannister, in Robert Kurson's Pirate Hunters: Treasure, Obsession, and the Search for a Legendary Pirate Ship. This nonfiction book focuses on deep sea divers John Chatterton and John Mattera. The glimpses of their pasts was interesting and helped show why they were so obsessed in discovering the Golden Fleece. I loved learning more about the pirate Joseph Bannister and the history of the Golden Age of Piracy. Kurson takes the reader on an adventure. I felt Chatterton and Mattera's frustrations as they searched for the ship and kept coming up empty. A few places the pace was a little slow and tedious, but thankfully, those parts are few and far between. I would recommend Pirate Hunters by Robert Kurson to anyone who loves learning about pirates, the Golden Age of Piracy (1600s-1700s), and the fascinating lives of deep sea treasure hunters.

A weekend of video games, hanging out with his Steampunk Quest friends, and enjoying the convention are all Josh Hanson had planned for, but when a dark-haired masked vixen captures his attention, he finds it hard to focus on anything but her in Christine Rains' Masked Kiss. I enjoyed reading this erotica story from a male point of view. Josh is geeky, sweet, and knows his video games. I liked how he wanted more than a con fling with Nat. The growth between the characters combined with all the hot and steamy scenes come together to make a satisfying story. Rains does an excellent job with the pacing, and I loved all the geeky fun. This novella can be read as a standalone or along with the other books in the Dice and Debauchery series, which takes place at the same gaming convention. If you're ready to get your geek on, then read Masked Kiss by Christine Rains.

Video game geek Josh Hanson never gets noticed by women until a gorgeous booth babe drags him into a dark room for a quickie.

She doesn't give him her name, and her face is covered by a silver mask. Josh is determined to find the dark-haired beauty again, but communication isn't easy in a huge hall filled with nerds. When they end up playing in a tournament later, the games extend into her hotel room. Josh wants more than just a con fling, but she's not easy to catch. Can he figure out how to beat her games and become her champion?

Add it to read on Goodreads!

EXCERPT FROM THE MIRACLE GIRL
Maybe it was best to make a clean break. College was over. Like she said, time to grow up.

I wiped my eyes, determined to be strong. A small object by the door caught my attention. It took me a second or two to finally figure out what it was. Claire’s matching friendship bracelet, the one we made our first summer together when we were co-counselors for a day camp. Since the day we had made them, neither one of us had taken them off. That was her parting gift: a clean break.

I snatched her bracelet from the floor and then yanked mine off. While rolling both of them in my fingers, I made a decision.

Yes, it was time for me to grow up. Leave my college love behind. Move on with my life.

The next morning I boarded a plane and never intended to see Claire again. It wasn’t until the plane took off that I realized I had made a terrible mistake, but it was too late. Or so I thought. 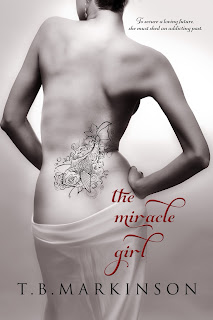 Newspaper publisher and world traveler JJ Cavendish continually feels pressured to live up to her Miracle Girl nickname. Not many people know she’s living a carefully crafted lie. She may not hide ties to the LGBT community, but she does hide past struggles with addiction.

When the Colorado native is handpicked to take the helm at a dying Denver newspaper, she ends up reconnecting with her long lost love in this contemporary lesbian romance. Only there’s a catch. If JJ fires the most belligerent editor at the paper, she risks losing the love of her life.

Mid-afternoon office romps abound in this romantic comedy while also focusing on what it takes for a newspaper to remain relevant in this age of social media.

Must JJ lose everything in order to gain a life more fully her own?

Praise for The Miracle Girl
“The Miracle Girl is phenomenal!” Christine
“The best one yet.” Shellie
“I don't often give 5 stars to books, but I loved this book.” Heidi
“Impossible to put down.” Windowwasher
“I was hooked by the first sentence.” Cheryll 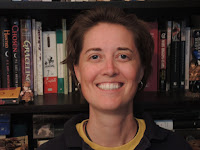 Author bio: T. B. Markinson is an American writer, living in England. When she isn’t writing, she’s traveling the world, watching sports on the telly, visiting pubs, or taking the dog for a walk. Not necessarily in that order.

BOOKS RELEASED IN JULY
ClownFellas by Carlton Mellick
Among the Ten Thousand Things by Julia Pierpont
Bombs Away by Harry Turtledove
Agents of the Internet Apocalypse by Wayne Gladstone
Broken Promise by Linwood Barclay
Speaking in Bones by Kathy Reichs
Black-Eyed Susans by Julie Heaberlin
From Bruges with Love by Pieter Aspe
Double Mint by Gretchen Archer
The Vanished Knight by M. Gerrick
The Heir’s Choice by M. Gerrick
Circling the Sun by Paula McLain
Does This Beach Make Me Look Fat? By Lisa Scottoline and Francesca Serritella
If I Could Turn Back Time by Beth Harbison
Weavers by Aric Davis
For Love or Money: Crafting an Indie Author Career by Susan Kaye Quinn
Killing Secrets by Dianne Emley
Wings in the Dark by Michael Murphy
The Widow’s Son by Thomas Shawver
Go Away Home by Carol Bodensteiner
Trollhunters by Guillermo del Toro and Daniel Kraus
Stormbringer by Alis Franklin
Somebody I Used to Know by David Bell
Gabriel by Patricia Josephine
Killing Maine by Mike Bond
The Miracle Girl by T.B. Markinson
Not So Lucky by RaShelle Workman
The Viper and the Urchin by Celine Jeanjean
Everything You and I Could Have Been If We Weren't You and I by Albert Espinosa
Scents and Sensibility by Spencer Quinn
The Rhythm of the August Rain by Gillian Royes
Go Set a Watchman by Harper Lee
Pale Kings and Princes by Cassandra Clare
The Fixer by Jennifer Lynn Barnes
The Spaniard's Kiss by Nina Croft
Storm in the Sky by Libbie Hawker
Even the Score by Kate Meader
Over the Top by Rebecca Zanetti
Untouchable by Cindy Skaggs
If You Dare by Jessica Lemmon
The Player Next Door by Kathy Lyons
A Haunting Desire by Julie Mulhern
A Touch of Chardonnay by Pamela Gibson
Opposing the Cowboy by Margo Bond Collins
Risk Me by Lexi Scott
Traitor by Jody Wallace
Malibu Betrayals by MK Meredith
No Kissing Allowed by Melissa West
Written on My Heart by Cole Gibsen
Crazy Over You by Wendy Sparrow

Wow, that is a lot of books this month.
Already own all of yours!

Holy... So many amazing tales! Thanks for sharing them all. Marked Kiss sounds totally engaging, steampunk and everything. :) And YAY! for TB!

I need to read the second book in Christine's series and then Marked Kiss. I loved the first one!

Thanks so much for plugging The Miracle Girl.

And wowzers. Great sales this month!

Wow! Can't believe all the books being released this month.

I haven't yet read Christine's Dice & Debauchery series, but I'd really like to.

Congrats to all who have books releasing this month. Love how long that list is.

Thanks so much for the awesome review and shout-out! Fantastic sales. I totally forgot Smashwords was having its July sale. =P

Nice excerpt from "The Miracle Girl"!

So many books being released and so little time!

A whole lotta books came out this month. Wowza.

I'm reading Blood and Sorrow right now by Christine and am enjoying it a lot.

Liking the excerpt. Thanks for sharing about all these books!

Lots of reads to choose from.

Have a great evening, Cherie.

This is so perfect! I just posted about wanting book recommendations for my summer reading list :) Thank you for these!

THAT is an incredible list... as you scroll down :)

Congrats to those publishing, thanks to YOU, Cherie and this can only help/show the rest of us that all *is* possible :)

Thanks so much for the mention! :-)

I love your bookish posts. T.B.'s book is amazing. I'd like to read Christine's.

Congratulations to all the authors with book releases. Thank you for sharing with us.

That is a really long list of new book releases! Is July a popular book release month, or something? Congrats to all of the authors. I hope I can be on a list someday. :)

I love an overflow of books! these all sound great :) and T.B.'s cover is magical!

Hey Cherie, Did you do your own Smashwords Meme's or get them at Smashwords? They really look good.

At this rate, I'll never catch up with my list of books to read. All look great and all are now on that interminable list of mine.

So many new books...glad its keeping us occupied!

So many amazing tales waiting to be discovered! Looking forward to them all!

Have a great evening, Cherie.

So many books, so little time! I'm off to Smashwords. :)

Thanks for the help with Thunderclap. Much appreciated!