#IWSG: Progress | An Excerpt from Nick Wilford's A Change of Mind and Other Stories | Wattpad Wednesdays: Reborn Chapter 26 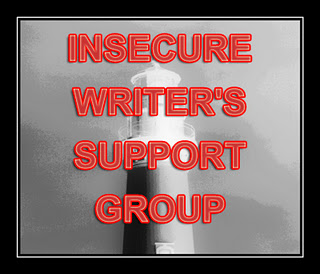 A short IWSG post today with a word of encouragement since Nick's here today with an excellent excerpt from his A Change of Mind and Other Stories. It's okay to fail as long as you get up and keep trying. Progress really is progress. Slow or fast, as long as you keep working toward a goal, you'll eventually get there. It's a hard lesson to learn, but one we all need to be reminded about every so often.

Read Reborn from the beginning or Chapter Twenty-Six.

Thanks for having me over today, Cherie. I’d like to offer your readers an excerpt from my novella, A Change of Mind, where my main character, Reuben, is arriving at his brother’s 40th birthday party.
*
I grabbed my paltry present from the passenger seat and got out. At least it was a balmy night. During the day, it was getting oppressively hot, but the evenings were pleasant. I approached my brother’s house, although it could be more accurately described as a mansion. An Edwardian townhouse in red sandstone, it was set back and partially obscured from the street by tall conifer trees. Entering the drive, I fixed my eyes on its large bay windows as if staring it down. Practice for doing it on real people, although I doubted I would be able to pull that off until I’d had my treatment.
There was a lawned section of the approach that was littered with gaudy modern art, mismatched from the house but also from each other. My brother was one of those people who liked to flaunt his self-made wealth but didn’t have any of the taste or refinement to do it with style. I didn’t resent his success because I had been programmed not to hope or aspire to anything. Nothing was going to get better, so it was all about day-to-day survival.
My own tastes were strictly neutral, to the point, or so I hoped, of being forgettable. I just wanted to fade into the background and attract no attention. I’d chosen a plain white short-sleeved shirt and blue jeans for the occasion, meticulously ironed, of course. Whereas my brother was always known for his peacock-like flamboyance. I hadn’t seen him for four years, but he had probably just got worse in that time.
And now I was at the front door. There was one of those brass knockers in the shape of a fist. Only, unusually, this one had its middle finger up. It summed up quite well my brother’s attitude to the whole world. Before I could reach for this offensive adornment, the door swung open and a middle-aged woman in a garish and inappropriately short pink dress barrelled into me. As I staggered back before regaining my footing, she ricocheted away and was violently sick into a potted hydrangea at the side of the front door.
It looked like the party was in full swing.
I left the woman emptying her guts and took a step into the hall in front of me. I don’t know how I did so, because it was akin to stepping into an alligator-infested swamp. It would look innocuous enough to anyone else – a crowd of people standing around chatting, hands thrust in pockets or holding various beverages, with apparent carefree ease – a skill that I sorely lacked. 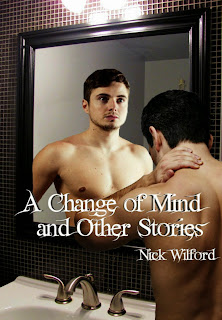 A Change of Mind and Other Stories consists of a novella, four short stories and one flash fiction piece. This collection puts the extremes of human behaviour under the microscope with the help of lashings of dark humour, and includes four pieces previously published in Writer’s Muse magazine.  In A Change of Mind, Reuben is an office worker so meek and mild he puts up with daily bullying from his boorish male colleagues as if it’s just a normal part of his day. But when a stranger points him in the direction of a surgeon offering a revolutionary new procedure, he can’t pass up the chance to turn his life around.  But this isn’t your average surgeon. For a start, he operates alone in a small room above a mechanic’s. And he promises to alter his patients’ personality so they can be anything they want to be…  In Marissa, a man who is determined to find evidence of his girlfriend’s infidelity ends up wondering if he should have left well alone.  The Dog God finds a chink in the armour of a man with a megalomaniacal desire to take over the world.  In The Insomniac, a man who leads an obsessively regimented lifestyle on one hour’s sleep a night finds a disruption to his routine doesn’t work for him.  Hole In One sees a dedicated golfer achieving a lifelong ambition.  The Loner ends the collection on a note of hope as two family members try to rebuild their lives after they are torn apart by jealousy.

Nick Wilford is a writer and stay-at-home dad. Once a journalist, he now makes use of those rare times when the house is quiet to explore the realms of fiction, with a little freelance editing and formatting thrown in. When not working he can usually be found spending time with his family or cleaning something. He has four short stories published in Writer’s Muse magazine. Nick is also the editor of Overcoming Adversity: An Anthology for Andrew. Visit him at his blog or connect with him on Twitter or Goodreads.

It really does help to be reminded of that. :) Yay for Nick! I loved his book.

Thank you for your wonderful words of encouragement. I really needed it today.

Congratulations to Nick! I've been seeing his book everywhere the past few days.

I'm seeing Nick's book all over the place. Good Luck Nick, wishing you loads of success!!!

Just keep that goal in front of you.

Totally agreed, sometimes people think it's important to achieve a goal as quickly as possible, but they're forgetting that lovely saying: "Slow and steady wins the race" :)

It's not failure if you keep trying. Break a pen, Nick!

I agree that we should keep trying, the result: success or failure is not in our hands. Hope your wrist is better, Cherie?

I've loved all of Nick's excerpts that I've seen. His writing is awesome. Congrats, Nick!

Having been a journalist gives you a head start, Nick, keep writing.

Great advice! It's important to just keep working, no matter how long it takes.
Congrats to Nick!

And yes, progress is putting one word in front of another, and repeating - no matter how fast or slow we work. Thanks for that reminder and encouragement, Cherie!

Nick writes in such a personal way. I love his voice.

Thanks, Cherie! And thanks for the kind words, folks. Your advice is excellent, Cherie. If we try and we fail, we learnt a lot. If we don't try at all, we learn nothing.

Congrats to Nick and his book promo. Nice that you featured him and great excerpt!

We all get knocked down from time to time, but the key is to keep on moving... We learn from every pitfall...

You're very right, Cherie. It's persistence that gets us places. Progress is progress. It's a great thing to keep in mind.

Failure is a great teacher. And it's all about moving forward. Great stuff, Nick!

I keep reminding myself that progress is progress, Cherie, no matter how little. It's good advice.

Wonderful excerpt, Nick, now I need to know what else happens at the party, LOL.

Great reminder and one I much needed, as I am feeling like I am falling behind on my goals because of work. But- I do continue to make progress, just not as much as I would like. :) Thanks!

Awesome to read a bit of Nick's work. Wishing him all the best!
~Jess

Progress at your own pace leading to that realised goal. Nice one, Cherie.

Delighted to see the remarkable Nick on your remarkable site. I've been following around like a starstruck groupie! Congrats to Nick and what the heck, congrats to you and anybody else who needs congrats.

Your word of encouragment is truly helpful. Thank you so very much and thanks to Nick for sharing an enjoyable excerpt.

Congratulations Nick. He was on my blog the other day. =)

Love the excerpt from Nick. He captured the characters so vividly in so few words!

That was a good scene Nick. Loved the description, and Rueben's comparisons.

Some days Cherie, progress is so difficult to achieve. Always welcome though, no matter how small.

Nick is everywhere. I hope to read his book this summer.

Nick's book is all over the place indeed. Good for him.

It's so hard to keep going when the goal feels far away! But writing is all about perseverance. Great post! And I've been seeing Nick's book absolutely everywhere... I still want to read that story about the personality surgeon, I think it was?! It sounds really cool.

I'm curious on Wattpad Wednesdays! I just joined Wattpad recently and so far have only read a few things over there. I'd love to know more. I'll poke around your site too.

Congratulations and Good Luck Nick, wishing you loads of success!!!

Great message of perseverance, Cherie! And, congrats to Nick, too.

Nick definitely has a way with words. I'm so glad to see his book getting so much exposure!

Progress is progress. Definitely keeping that in mind. It's hard to remember that when I'm at my most discouraged.

Congratulations to Nick! I enjoyed the excerpt.

Every step in the right direction is progress. Way to go, Nick!

Congratulations to Nick! I've been seeing his book everywhere the past few days.

Very true, Cherie. We only really fail when we give up.

I have Nick's book on my Kindle and can't wait to read it.