Calla Larkenwood thought she only had to keep her Griffin Ability a secret, but other secrets threaten to turn her life upside down in Rachel Morgan's A Faerie's Secret. Although not quite as kick-butt as her brother's wife Vi, Calla has her moments and will do anything in her power to help, even use her special gift when she's not supposed to. I found it refreshing to have a main character be naive and positive, even to a fault. It says a lot about Calla, especially since her past was not all sunshine and roses. Morgan carries the theme of secrets and their destructive powers throughout the novel. This fast-paced story quickly gripped me in its clutches, and I had to find out what would happen to Calla and even more importantly the secrets of the hot tattoo artist she has befriended. The betrayals and secrets revealed spiral to a whirlwind of an ending that will leave readers breathless and craving the next book in the Creepy Hollow series. If you're a fan of the previous Creepy Hollow books, then you need to read A Faerie's Secret by Rachel Morgan. If you haven't read them yet, then what are you waiting for?

Layers of Lace by Christine Rains

Amateur cosplayer Emily Solis is determined to win the costume contest and the heart of her biggest competition.

It isn't the first time Emily has shed her costume with the gorgeous Russell Morrison. Not even her best friend knows she's been having wild convention sex with him for over a year. It was supposed to remain physical, but Emily couldn't help falling for him and his kinky ways. In a moment of passion, she rolls the dice and tells Russell she loves him. He doesn't say it back. Can she convince him they're perfect together or will she roll another critical failure?

EXCERPT FROM VANESSA MORGAN'S AVALON
Around three o’clock that night, Avalon was fed up with the strange man in his bed. He plonked his rear down on Gilles’ pillow, complaining fretfully in his ear while tapping him on the face.

After nearly an hour of incessant wailing and poking, more drastic measures were required. The new solution: pushing Gilles out of bed.

Climbing back under the covers wasn’t an option. Unable to sleep, Gilles got up. "I guess I didn't pass the test."

"Give Avalon some time. Maybe he was just irked because you took his side of the bed."

But Gilles had already understood that this wasn't going to be a one-time event.

For several minutes, Gilles and Avalon sized each other up. Then Gilles said, "I’d better leave the two of you alone now. It’s clearly what the little guy wants."

I swear I could see Avalon smirking when Gilles put on his jacket and left.

Instantly, Avalon leapt onto me, and compensated for the evening before. He entered a kiss-induced trance. This cat was all about exclusivity, and when granted that exclusivity, his love was immense.

"Are you really that happy that Gilles is gone?"

In reply, Avalon looked at me with swoony eyes and purred loudly, then swatted out his paw to urge me to continue to pet him, which I did.

A phone call interrupted our tender moment. It was Gilles.

"There won't be any train to Brussels for hours," he said. "Is it okay if I come back to your place for a while?"

"Of course." His return would offend Avalon, but I couldn’t possibly leave Gilles outside in the rain for several hours.

As soon as Gilles appeared at the front door, Avalon’s pupils widened to a pitch black.

Let's see who's the boss here, he seemed to be thinking.

Being a cat of action, Avalon went through his usual attention-seeking routine: making a selection of irritating noises, scratching the wallpaper, and pushing objects to the ground.

When that didn't work, Avalon opened Gilles' overnight bag and threw out a piece of clothing. His eyes so dark and evil they could be gateways to hell, Avalon stared at his adversary and waited for a reaction. He then pulled out a box of gel wax. Again, he looked up at Gilles to make sure he understood that all this bungling was meant to get a message across. A third object followed, then a fourth, a fifth, a sixth, until there was nothing.

Hell-bent on winning the game, Avalon took Gilles' coat in his mouth and towed it toward the front door. There, he used his right paw to tap the keys hanging from the wooden doorframe.

Avalon’s message couldn’t be any clearer: there was room for only one man in my life. A feline one. 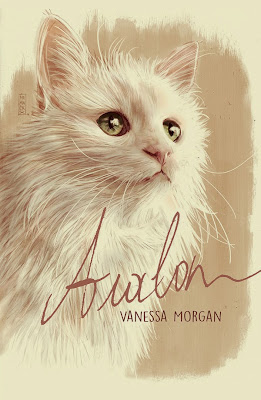 Some cats need nine lives to make a difference. Avalon only needed one.

From Amazon bestselling author Vanessa Morgan, Avalon is the heartwarming and once-in-a-lifetime love story of a girl and her neurotic Turkish Van cat.

With humor, the author details how Avalon made other creatures cringe in distress whenever he was around, how he threw her dates out by means of special techniques, and how he rendered it almost impossible for her to leave the house. Avalon was so incorrigible that even her landlord ordered her to get rid of him. But beneath Avalon's demonic boisterousness, Vanessa recognized her own flaws and insecurities, and she understood that abandoning Avalon would be the worst she could do to him. Thanks to her unswerving loyalty, Avalon transformed into a tender feline, and even landed a major role in a horror movie. In turn, Avalon made it his mission to be there for his human companion.

By turns jubilant and deeply moving, Avalon is a memoir for anyone who has ever been obsessively in love with a pet.

Vanessa Morgan is an author, screenwriter, and blogger. Two of her works, The Strangers Outside and A Good Man, have been turned into films. Her short film script Next to Her is currently in pre-production. When she's not working on her latest book, you can find her reading, watching horror movies, digging through flea markets, or photographing felines for her blog Traveling Cats. Avalon has appeared in several of her books and films.

BOOKS RELEASING IN JUNE
Scorched by Jennifer L. Armentrout
What Doesn’t Kill Her by Carla Norton
Don’t Lose Her by Jonathon King
The Temple of Light by Daniela Piazza
Mercy House by Adam Cesare
The Rhyme of the Magpie by Marty Wingate
Trust by Jodi Baker
Pirate Hunters by Robert Kurson
Every Last Word by Tamara Ireland Stone
Charlie, Presumed Dead by Anne Heltzel
A Girl Undone by Catherine Linka
Sweet by Emmy Laybourne
Holy War by Mike Bond
A Faerie’s Secret by Rachel Morgan
Alive by Scott Sigler
Secret Worlds by Various Authors
Ghost Fleet by P.W. Singer and August Cole
As Night Falls by Jenny Milchman
Tin Men by Christopher Golden
Death in Brittany by Jean-Luc Bannalec
Manhattan Mayhem edited by Mary Higgins Clark
The Lovers’ Tango by Mark Rubinstein
The Superyogi Scenario by James Connor
The Bones of You by Debbie Howells
Kill Again by Neal Baer and Jonathan Greene
The Witch Hunter by Virginia Boecker
Ever After by Jude Deveraux
The Truth and Other Lies by Sascha Arango
The Truth According to Us by Annie Barrows
Stir by Jessica Fechtor
Those Secrets We Keep by Emily Liebert
Avalon: a Heartwarming True Cat Story by Vanessa Morgan
Masked Kiss by Christine Rains
Ruthless by John Rector
The Devil’s Game by Sean Chercover
Queen of the Trailer Park by Alice Quinn
Those Girls by Lauren Saft
The Book of Speculation by Erika Swyler
The Master Magician by Charlie N. Holmberg
Fixed in Blood by T.E. Woods
Duke City Desperado by Max Austin
F Train by Richard Hilary Weber
Finders Keepers by Stephen King
The Evil We Love by Cassandra Clare
Get Dirty by Gretchen McNeil
Protector for Hire by Tawna Fenske
Pixelated by L.S. Murphy
Dark Rising by Monica McGurk
Posted by Cherie Reich at 8:00 AM

Thank you for the awesome review! Congratulations to Rachel and Vanessa. I'm in good company today. :)

I know all of those authors! Congratulations to Christine and Vanessa on their releases.

Awesome you read Rachel's and Christine's books. Glad you liked them.

Great reviews. I knew I wanted to read Christine's new series, but now I have more authors to add to my list. Thanks!

These all look amazing, fabulous reviews!

Congrats to Vanessa, Rachel, and Christine! I miss my kitty poking me in the face in the morning. Although she's better, our routines have changed.

I've read some titles by Christine and Rachel and would like to read more. I really enjoyed Avalon.

I can't wait to read Avalon even though I know I'll cry.

Look at all those June releases! Wow!

Great to read the excerpt of Avalon. Sounds like a great book.

I also loved your reviews. Both books sound fabulous and I look forward to reading them. Thanks for sharing!
~Jess

Some good books featured here! I enjoyed reading the excerpt from Avalon.

Great books featured. I enjoyed some already and some on my list.

All of the books featured sound like good reads. As a pet lover, I think I'll really enjoy Avalon. The excerpt was really entertaining!

Thanks for the informative post, Cherie. So much talent out there. It's fab!!! Congratulations to all involved!