Since I'm taking a vacation from the day job next week, I've decided to take a blogging vacation too. My next post will be on August 5th.

July's been very busy and trying month. I've fallen so far behind in everything it's pathetic, and I just can't seem to catch up where I should be, so once again I'm rearranging my goals. It hasn't helped that I've been having some eye problems since April. I have dry eye--probably caused by my allergy medicine and spending 8+ hours a day on the computer doesn't help either. The eye doctor said the average person's tears break up around fifteen seconds; mine break up around three seconds. I'm taking OTC drops and flax seed oil pills, and while that does help, when I'm tired, my eyes refuse to work. It's slowed down my writing and reading a lot more than I want to admit. So I'm a big Camp NaNoWriMo fail for the first time since I started participating in NaNoWriMos. *sighs* I'm still hoping to get at least Part I in Reforged finished as well as four short stories in Neighbors of Foxwick this month.

Also yesterday was my dad's 59th birthday and my parents' 36th anniversary! 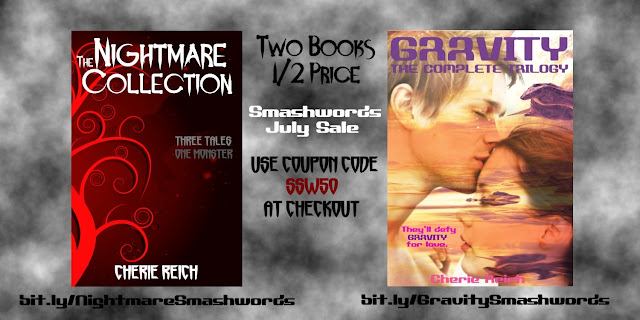 Also, Smashwords is once again having its Summer/Winter Sale. Through the end of July, you can purchase the ebooks of Gravity: The Complete Trilogy and The Nightmare Collection for $1.50 using the coupon code: SSW50. By the way, I've been playing around with the ebook covers for these two books. What do you think?

I also have two unedited excerpts. The first is from "Siren's Call," a short story in the forthcoming Neighbors of Foxwick.

“Keep an eye out for rocks, so we don’t run aground.” She shifted the wheel toward the island.

Thunder grumbled like an ornery old man. Another wave swelled and lifted the ship high in the air. Tamarlyn held her breath as they crashed down.

Water swept over the deck and knocked her feet out from under her. Pain raced along her arms as she held onto the wheel. The ship swirled widely toward starboard.

Strong arms righted her and steadied the wheel. “You should get below deck, Capt’n.”

Tamarlyn glanced back at the bulked-up Brutis. Her fingers tightened upon the wheel, and she ignored the heat radiating from him against her. “I’m not some fair maiden. Go tie yourself to the ship, so you don’t wash overboard.”


This second excerpt is from Reforged, and it introduces some new characters to book two, not that most of you have met the old characters from book one. *laughs*

“Come up for air, you two.” Ferris knocked against Sari and Karn.

Karn’s face changed from its yellowish-tan color to red as he accepted his drink.

“Oh, yes, I want to make out with Karn all the time.” Ferris made a smoochie face at Karn, which made the other boy even redder.

“And you know you love it.” Ferris winked at her.

Bea giggled.
Posted by Cherie Reich at 8:00 AM

Sorry about your eyes. All that computer time really drains the eyes.
Congratulations to your parents!
Great excerpts. You're good with humor.

Take care of your eyes, try and blink a lot. Great excerpts, Cherie. Good luck with the goals.

Your poor eyes. You need more rest time for them! I love that last excerpt. Hilarious! I can't wait to read the story. :) My August goals are to get everything ready for the collection.

I hope you can find a good solution to the dry eye problem. If you can't focus, reading and writing becomes such a headache -- and for me, there's nothing worse than not being able to read and write!

In August, I'd really like the plot of my next book to appear to me in dream, crystalline and perfect. But that's not going to happen ...

I feel you on the eye problems.
I need to figure out my August goals, but this week has been so busy, I've had little time to think about writing.

I hope you get your eyes back to normal.

I plan to finish up Backworlds #4 and get it to my editor. That's my July and August goal. I'd also like to make some progress on my fantasy novel. We'll see...

Have a good rest... and look after your eyes.
Writer In Transit

Spicy excerpt with Reforged! Have fun during your blog break.

Don't be so hard on yourself, Cherie. We all need to more compassionate with ourselves when it comes to our goals. We're not robots, after all. You realize that you couldn't make your goals and it's not really your fault. All you have to do is make them more realistically achievable for the next month. ;)

Anyway, have fun on your vacation! I'm sure you'll feel refreshed giving yourself a nice break.

I am glad you are taking a break from work and from blogging (though you will be missed). It will be a good step on the way to feeling refreshed, relaxing, and hopefully helping your dry eyes too! I am sure you will still be writing, but less blogging will be less computer time for that purpose. Sorry to hear about your dry eyes.

Don't put too much pressure on yourself or you will feel like you are failing. Take a moment to celebrate all that you have accomplished this year and this summer (even if you had more you wanted to do). :)

Awesome excerpts! I love the end of Reforged. :)
~Jess

That really sucks about your eyes. I can see how that'd make it harder to accomplish your goals! Good luck catching up with everything in August!

Loving the excerpts, btw. The second one was especially fun!

Sorry about your eyes! I have contacts now, but if I plan on writing a ton or editing, I still wear my glasses. My eyes dry some with the contacts.

36 years for your parents, awesome. Dry eyes are terrible, I wish you well. You still amaze me, Cherie with the goals you place on yourself. I'm impressed. Good Luck to you!

Ohhhh... so sorry about the eye troubles. I would HATE that. That's got to be so frustrating. Take the summer off--try and not pressure yourself. There is always work to be done and I think we writers are too hard on ourselves. :)

Ooh, love the excerpt! Looks like you've got a lot of awesome things planned :)

Blast to the eye troubles. That stinks. I hope it all resolves itself and quick!

Great goals! I plan on doing a lot of marketing work for my book in August. It'll be great!

I love this line from your first excerpt: "Thunder grumbled like an ornery old man." Great imagery! Love it.

I hope your eyes feel better. I had eye problems in the past and they can kill productivity.

Good luck with your goals.

Yikes. I worry for your eyes Cherie. I hope you come back from vacation feeling rejuvenated and that your eyes feel better soon.

Hope your eyes get better with rest. Wishing you a wonderful vacation- catch you when you get back!

BTW- I really enjoyed the excerpt a lot. :)

I'm sorry to hear about your eyes. I hope they get better or the eye doctor can find a way to help. Get as much rest as you can. I hope you are able to get everything done.

I love the excerpt! Looks like you've got a lot of awesome things planned.

Hope your eyes are better. Also, enjoy your vacation! I'm taking a one next week. :)

I'm sorry to hear about your eyes. Hope your vacation goes well.

Sorry to hear about your eyes. I hope you'll find something that helps them soon.

Enjoyed your excerpts; you've a knack for dialogue. Any problems related to our eyes or hands -- those are the ones writers fear most. And WiFi connectivity issues... Hope your eyes start working again real soon!