Friday Excerpt: Nightmare at the Freak Show from The Nightmare Collection

Today I have an excerpt from the short story "Nightmare at the Freak Show" from The Nightmare Collection.

“Come one, come all! See the beast. Half-man, half animal. Come buy your tickets. A nickel will let you watch this extraordinary creature.”

He could hear Victor’s voice calling to the carnival patrons, so he only had moments before performing for them. The red sheet fell to his feet and shielded his body from view until the grand reveal. He crouched down, and the shackle around his ankle clanked.

“Yes, yes, gather around. When you enter, do not go too close to the cage. The beast is very dangerous, and you must take care.” Victor flung open the tent’s flap, and sunlight poured into the opening. “Enter, my friends, and be amazed!”

Men, women, and children filled the tent, and the flap closed behind them.

He trembled under the sheet while they crowded around. Their proximity overwhelmed him, and the child monster cowered toward the rear of the cage. The bars pressed against his back.

“I see no monster here.” A man let out a grunt in disappointment.

The spectators grew restless from anticipation.

Victor took a stick and raked it across the bars. The monster winced and covered his ears. He hated when his master did that.

“Show them, beast. Remove the sheet.”

He rose to his feet and touched the soft cotton fabric. With a flourish, he yanked the red sheet off his body. It floated in the air like a leaf before pooling behind him.

A collective gasp filled the room.

He stood still for a moment and let them see his form. The hairy creature he was. Then, baring his dagger teeth, he leapt at the bars. His hands clung to them, and he growled.

Shrieks of horror burst from several ladies. A couple women fainted. Children clutched to their fathers and cried. The men skirted farther away from the cage.

His gaze roved around the room. Their reactions were so predictable, and the creature knew the next shows would produce more spectators. They feared him, but they needed to see the beast. His angry grin faltered when he spotted one child.

A girl no more than ten stared at him. Clothed in a frilly yellow dress, she smiled. Her blue eyes were wide and kind, and her golden curls bounced upon her head when she moved forward. Before she touched the bars, Victor snatched her hand.

“Now, now, my child. Not too close.” He clapped his hands. “Ladies and gentlemen, you’ve seen him. Tell your friends. We’ll be here all weekend.”

Once again, Victor opened the flap.

The fainted women revived and clutched to their men while the people left the freak show behind. The girl left last and kept her gaze upon him until the sunshine swallowed her.

The tent entrance closed. Muted laughter filled his ears, and he sank to the dirty, hay-strewn floor. He only had a slight reprieve before the show would begin again. Everyone had to see the caged monster.

They would never leave him alone. 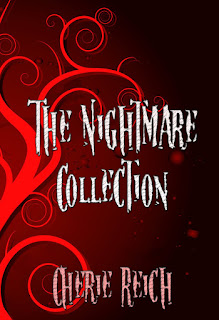 A child monster will get its first taste of blood in Nightmare at the Freak Show. Four friend will enter the forest on December night, but only one can survive in Once Upon a December Nightmare. Almost ten years after Cassie's December nightmare, the monster awakens to hunt again in Nightmare Ever After.

Email ThisBlogThis!Share to TwitterShare to FacebookShare to Pinterest
Labels: friday excerpt, nightmare at the freak show, the nightmare collection

What a sad beginning...

That is a sad beginning, I agree with Alex. But what writing! Bodacious. I'm liking the Nightmare collection. It's fantastically written. You feel you're there. *gulp*

Awesome. A caged creature/person can only take so much pressure before he snaps. This must be quite the collection! :)

Wonderful excerpt. I never wanted to feel sorry for the monster! *LOL*

Wow :) I've just started reading a book about a girl who joined a circus since she had fur all over her body like a lion (weird description... i've only just started it and it's in norwegian!)

Anyway, just wanted to let you know, i changed my blog name, you can find me over at thelittlenordiccabin.blogspot.com now :)

I love the excerpt! Now I want to read the whole thing.

Beautifully written I want to read on.

oh creepy. I don't know why but small monsters seem scarier, especially hungry ones. And I also feel sorry for him!! Well written, Cherie!

A sad start- but very intriguing. Great writing! Have I mentioned that I love the cover? Awesome!
~Jess

A sad but great start...makes you wonder if monsters feel anything, anything at all?

I feel bad for the poor creature. Great excerpt!

Fantastic snippet! I already want to read more! But aw, I feel so sorry for him. At least that one girl wasn't afraid of him like the rest...