Diana Murdock has recently updated her cover of Souled, and I'm helping to spread the word. It's a completely awesome cover! Don't you agree? 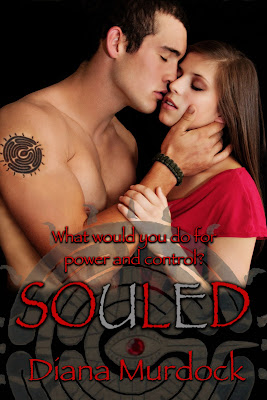 What 17-year-old boy wouldn’t be tempted by the promise of power and control - no matter what form that promise came in?

Seth knew exactly what he would do with power and control.  He’d be well on his way to a wrestling scholarship, his dad could stop working so hard to make ends meet, and he’d forever have the heart of his girlfriend, Sandpoint High’s most beautiful girl.

For Seth, the temptation was much too strong to resist. And why should he?  The way he saw it, he had everything to gain.

But when he unknowingly invites another soul to share his body, Seth discovers that not all power is good – especially when it was never his to wield.  And when the soul reveals its true intentions, will Seth have the strength to fight it or would death be less painful?


Reason for Cover Change:
As much as I loved the original cover of Souled, I realized it didn't quite convey what I had intended. The love that the main characters have for each other could only be told through a different picture.  I was fortunate to have Scott and Elaina, both teens in the Sandpoint area, agree to model for this cover.  Though not professional models, they certainly acted as if they were and gave me 100%. I think they captured the essence of what Seth and Dani, the main characters, felt for each other - the pure love that knows no boundaries.  The kind of love that will see them through hell and back.

Special Note:
Scott Snow, the boy on the cover, is currently in Switzerland training with an eye on attending the 2014 Winter Olympics in Russia as part of the US Olympic Ski Team.


To purchase on Amazon.

About the Author:
Diana Murdock California-grown, now in Idaho, writer of women’s fiction and Young Adult paranormal with enough energy to write, raise two boys, run, and dream – but not always in that order.

I'm loving the FYI about Scott! That is cool!

The cover is definitely intriguing and I really like the premise. Best of luck to Diana.

Steamy cover! Love the juxtaposition of the cover symbol and the tattoo.

Thank you so much, Cherie, for helping to spread the word about the new cover. I'm really pleased with the way it turned out. A giveaway is scheduled on Goodreads this week for two weeks. I hope you and your readers stop on by! Thank you again, and thank you all for your wonderful comments.