The Rifters by M. Pax
The Challenge by Cas Peace
Cataloging and Classification for Library Technicians by Mary L. Kao, MLS, PhD
Even in Death by Kristy Feltenberger Gillespie

The Rifters by M. Pax

Moving to Settler, Oregon may be more than Darlin Dae "Daelin" Long bargained for in M. Pax's The Rifters. This short novel hooked me from the first chapter. The action moved fast paced, and the mysteries never ceased. Daelin was easily one of my favorite characters with her quirky expressions, such as "in all the dictionaries," to the fact she was taking the town's library job. As a librarian, I have a soft spot for them in books. Earl was rough around the edges, and his enigmatic ways kept me a tiny bit distanced from him. The town of Settler is unlike any town I've encountered, and I loved the world Pax has created. Part-fantasy, part-science fiction, part-steampunk yet completely enthralling, The Rifters by M. Pax is the start of a great new series.

The Challenge by Cas Peace

Sullyan's and her friends' battles are just beginning in Cas Peace's The Challenge. I fell in love with the world Peace created in the first trilogy Artesans of Albia. From the magic systems to the different realms, I enjoyed understanding more about the world created. The book started out strong for me, but then again, Taran is one of my favorite characters and the reason I fell in love with the very first Artesans of Albia book. He's honorable, caring, and has so much room to grow. Yet as I read, the pace slowed to a trickle and Sullyan started getting on my nerves. I almost gave up reading, but I'm glad I pressed through because the pace picked up and roared full-steam until the end. I still want to throttle certain men in the book for their idiotic behaviors, though, and perhaps do worse to the main loathsome villains. The Challenge by Cas Peace is the start of what looks like an intense new trilogy.

Cataloging and Classification for Library Technicians by Mary L. Kao

I read Mary L. Kao's Cataloging and Classification for Library Technicians to learn more about cataloging.  Although a good basis for library terms, I found the writing to be dry, boring, and a tad overwritten and repetitive. The book has some history of cataloging and talks about the basics of what every book needs to be cataloged, but I wish it had more about MARC records and LCC numbers. Even though this book came out in 2001, I was surprised it didn't focus more on computer-based cataloging as opposed to card cataloging and the like. Cataloging and Classification for Library Technicians by Mary L. Kao is a good start for a librarian learning cataloging, but perhaps something more current would be more useful.

Even in Death by Kristy Feltenberger Gillespie

Death is not the ending in Kristy Feltenberger Gillespie's Even in Death. I enjoyed every single story in this collection. The voice pulled me in, although a couple stories I had to read slower to figure out which character was which. Some stories brought tears to my eyes. Some made me laugh. Some were fraught with tension and left me guessing what would happen until the very end. This collection was a great mix of contemporary, paranormal, and horror stories. Death may be a central theme to Even in Death by Kristy Feltenberger Gillespie, but hope and life find their way through times of death in these stories. 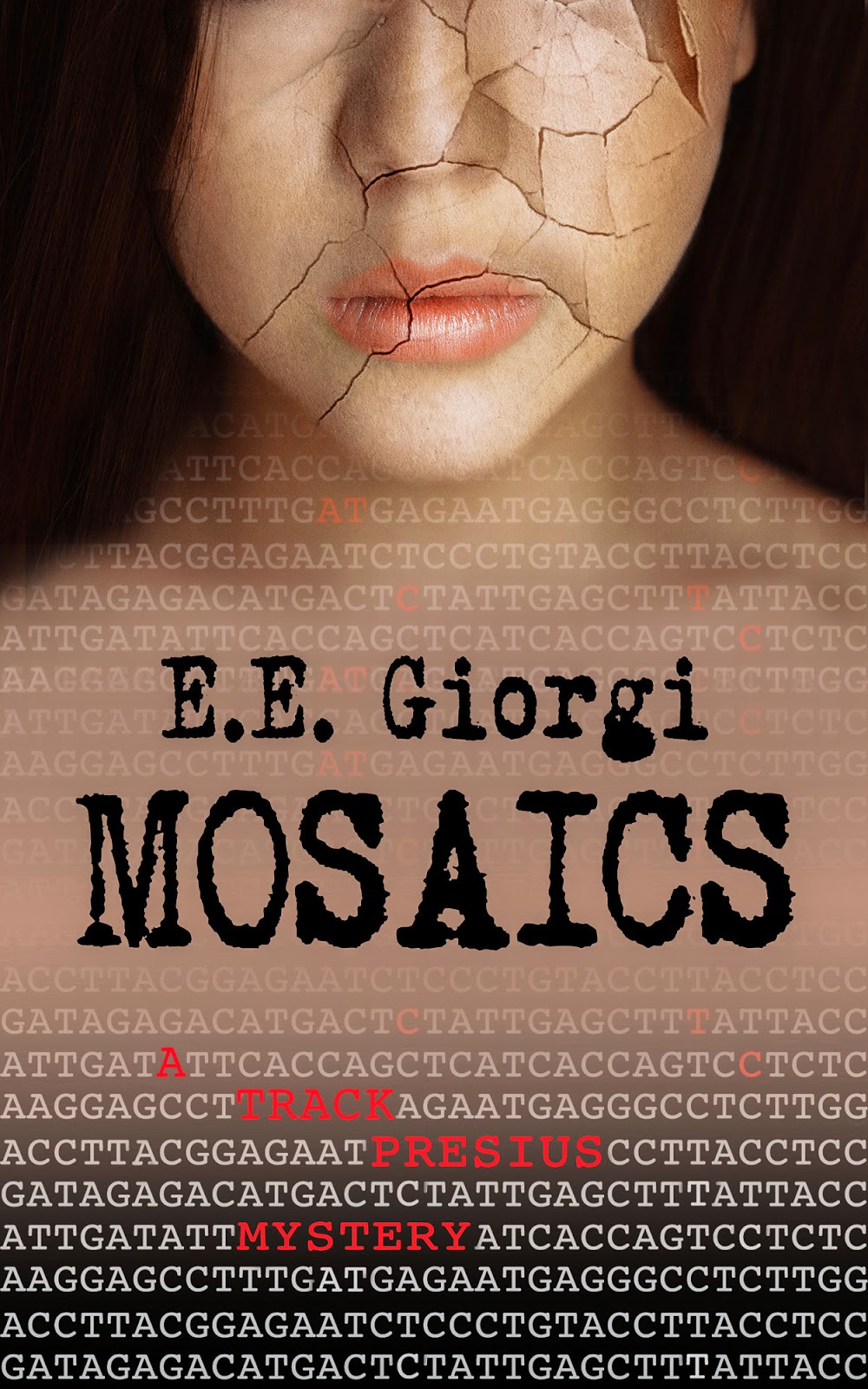 It's here: MOSAICS, book 2 in the Track Presius mystery series is finally here! And to celebrate I'm giving away a signed copy of the book and a $25 Amazon gift card, just enter the Rafflecopter giveaway below. Aaaand three Kindle copies of the book for the next three winners.

So, what are you waiting for? Enter the giveaway, then go grab your copy, grab one for your mom, sister, dad, spouse, and nephew, and go read. Just leave the lights on. You never know. ;-)

MOSAICS is book 2 in the Track Presius mystery series, a hard-boiled detective thriller with a genetic twist. CHIMERAS, book 1 in the series, is a 2014 Readers' Favorite Book Award finalist.

MOSAICS (Track Presius #2)
Dubbed the Byzantine Strangler because of the mysterious mosaic tiles he leaves at the crime scene, a new serial killer is stalking the streets of Los Angeles. Racing to decipher the code encrypted in the tiles before the killer strikes again, Detective Track Presius faces a new challenge: the "awakened" genes that make his vision and olfactory sense so sharp are now taking a toll on his life. When a new set of tiles appears in his own backyard, Track makes a chilling realization: those very same genes that are threatening his life are drawing the Byzantine Strangler closer and closer. The line between hunter and hunted has suddenly blurred. Will Track be the next piece of the mosaic puzzle?

CHIMERAS (Track Presius #1)
Haunted by the girl he couldn't save in his youth, and the murder he committed to avenge her, Detective Track Presius has a unique gift: the vision and sense of smell of a predator. When a series of apparently unrelated murders reel him into the depths of genetic research, Track feels more than a call to duty. Children are dying -- children who, like himself, could have been healthy, and yet something, at some point, went terribly wrong. For Track, saving the innocent becomes a quest for redemption. The only way he can come to terms with his dark past is to understand his true nature.

BIO: E.E. Giorgi is a scientist, a writer, and a photographer. She spends her days analyzing genetic data, her evenings chasing sunsets, and her nights pretending she's somebody else. On her blog, E.E. discusses science for the inquiring mind, especially the kind that sparks fantastic premises and engaging stories. 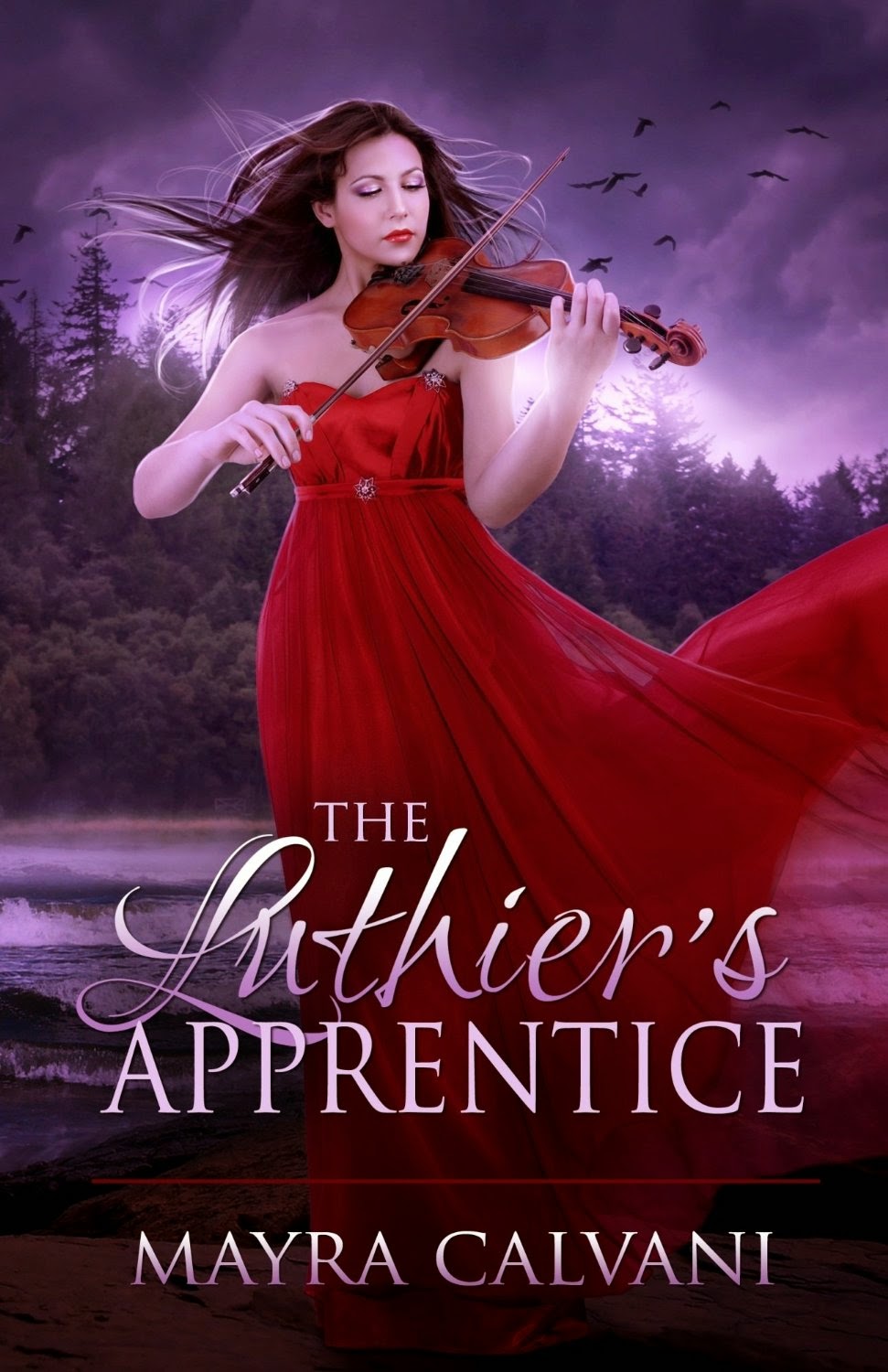 Niccolò Paganini (1782-1840), one of the greatest violinists who ever lived and rumored to have made a pact with the devil, has somehow transferred unique powers to another…

When violinists around the world mysteriously vanish, 16-year-old Emma Braun takes notice.  But when her beloved violin teacher disappears… Emma takes charge. With Sherlock Holmes fanatic, not to mention gorgeous Corey Fletcher, Emma discovers a parallel world ruled by an ex-violinist turned evil sorceress who wants to rule the music world on her own terms.

But why are only men violinists captured and not women? What is the connection between Emma's family, the sorceress, and the infamous Niccolò Paganini?

Emma must unravel the mystery in order to save her teacher from the fatal destiny that awaits him.  And undo the curse that torments her family—before evil wins and she becomes the next luthier's apprentice… 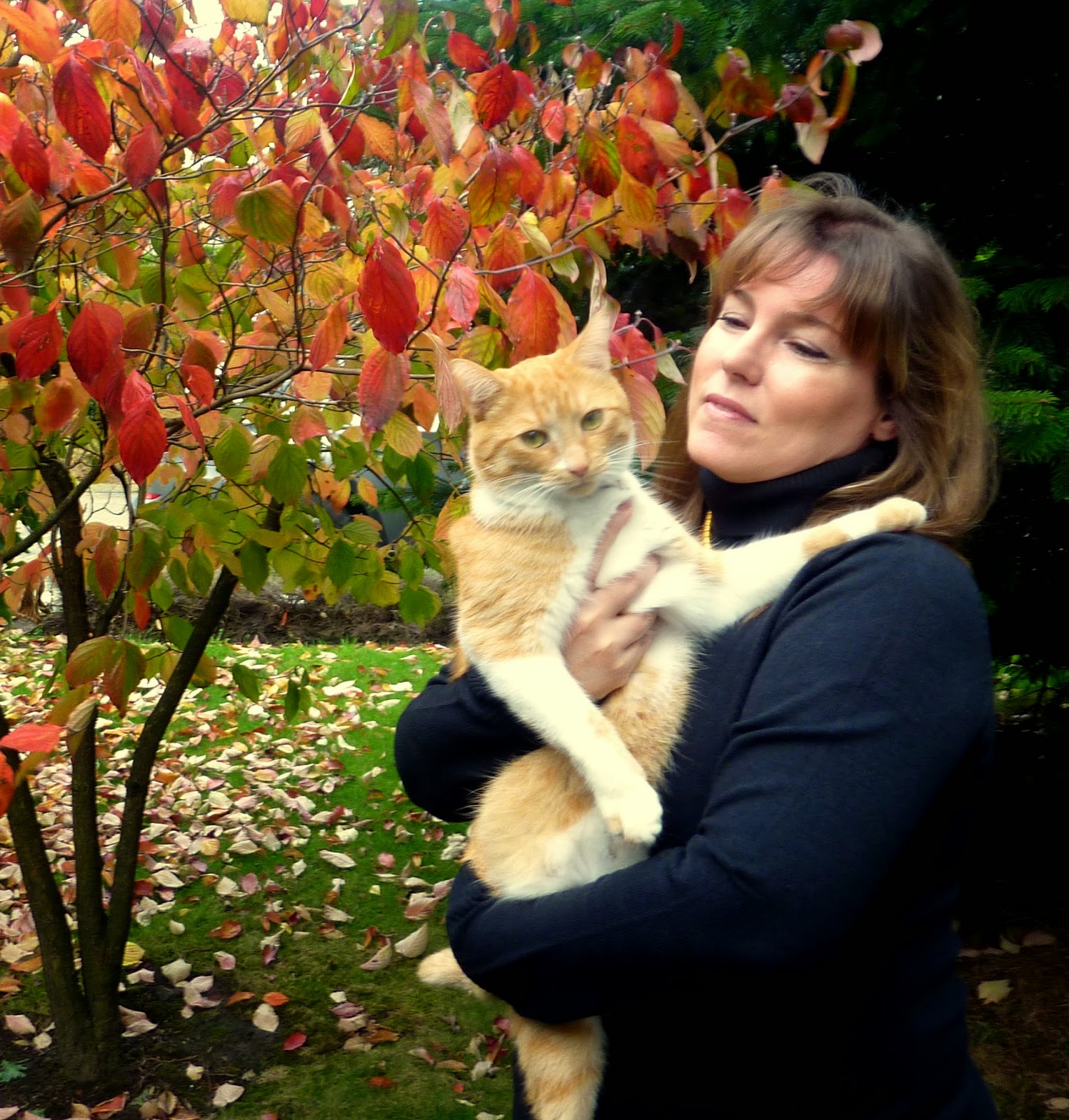 Award-winning author Mayra Calvani has penned over ten books for children and adults in genres ranging from picture books to nonfiction to paranormal fantasy novels. She’s had over 300 articles, short stories, interviews and reviews published in magazines such as The Writer, Writer’s Journal and Bloomsbury Review, among others. A native of San Juan, Puerto Rico, she now resides in Brussels, Belgium.

BOOKS RELEASED
Torn by Laney McMann
Mad Dog Justice by Mark Rubinstein
Who R U Really? by Margo Kelly
Secrets of Honor by Carol Kilgore
Death Knocks by Jay Noel and Miranda Hardy
Private Internship by Kitsy Clare
Second Death by Gwen Gardner
Being Audrey Hepburn by Mitchell Kriegman
Party Games by R.L. Stine
Feuds by Avery Hastings
Confessions from a Coffee Shop by T.B. Markinson
Something About Love by Elana Johnson
First Daughter by Susan Kaye Quinn
The Trouble With Flirting by Rachel Morgan
Phobic by Cortney Pearson
The Test of Time by Nicole Zoltack
Illusions of Fate by Kiersten White
The Paper Magician by Charlie N. Holmberg
Get Even by Gretchen McNeil
Maplecroft by Cherie Priest
The Girl from Nowhere by Christopher Finch
Kodiak Sky by Stephen Frey
Falls the Shadow by Stefanie Gaither
Shug'ah by Imani Writes

As it's the third Wednesday of the month, it's time for another chapter of Reborn to be up on Wattpad. You can start at the beginning here or click here to read Chapter Nine.
Posted by Cherie Reich at 8:00 AM

That's a scary amount of books in just one week!

Great reviews. That is a lot of books released!

thanks so much for featuring my book, Cherie!

The book cover for MOSAICS is creepy! (creepy good)

Mosaics and the violin book look awesome. Thanks for the review :D

Wowza on the books out.

Great reviews. I love the cover of Mosaics, and I think Mayra's story sounds cool.

Awesome reviews! Mosaics sounds sweet! I just bought the first book in that series! I can't believe how many books were just released...holy cow!

So glad you liked Mary's book. It sounds good.

That is an awesome cover.

That's a very gorgeous cover for The Luthier's Apprentice!

That is a lot of reading! I've started reading The Rifters. I'm enjoying it.

Lots of books. I've officially torn up my TBR list in frustration.

Loved reading your reviews. All of them, except the cataloging one, sound great! Look at all the books that are new to the world this week! Love it! :)
~Jess

Wow, Cherie. You clearly are on a roll with your reading and reviews. I'm jealous.
I have Mary's book waiting for me in my Kindle and after reading your review, I am so looking forward to diving into the story!

You rock, Cherie -- and I bet your eyes aren't even tired. I've been seeing the Rifters all over the Twitterverse lately; hope the new series is a huge success for Mary.

Great reviews! Love the covers featured, too. Mosaics is on my Kindle already, but The Luthier's Apprentice is new to me. Just added that one to my wishlist!

Looking forward to reading the Rifters when my teaching and TBR pile simmers down. Love that Mosaics cover!!!

Oh wow, so many beautiful things! Good list of recommendations :) I love what you're doing on Wattpad, seems like it takes a lot of work and stamina!

Great reviews. So many books too!

Even In Death sounds really interesting.

I've bought The Rifters a few days ago, but haven't had a chance to read it yet. Hoping to get to it this weekend, though.