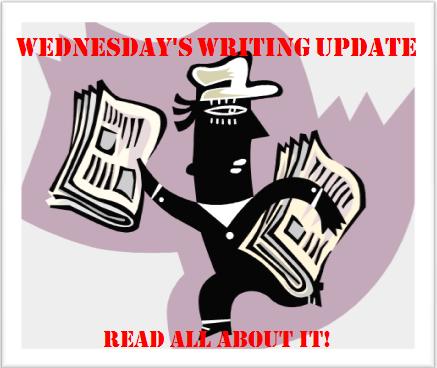 I've finished my final edit and first two proofreads of People of Foxwick and Their Neighbors. As soon as I get my final cover art from my brilliant cover artist, then I can purchase my print proof and finish my final proofread before publication. While I'm waiting on the print proof, I plan to write Remarked.

Here are my October goals:

My main goals revolve around People of Foxwick first and then Remarked second.

What are your goals for October?

Just a couple months away!
You have the coolest covers...

Man, you are making me feel REALLY disorganized--Setting up pre-order? Publish date 2 1/2 months out... significantly more intentional than I seem to manage. I think I need some of that.

I adore that cover! It's poster worth.

LOVE that cover! Can't wait for this collection's release. It's fantastic. My goal for October is to catch up on my writing that I couldn't do this month. =P

You do have awesome covers. And sounds like this will be a productive few months. Awesome you're planning another book release. Let me know if you want me to shout out about it in follower news at release time.

Congratulations on finishing your final edit, Cherie! Will keep a lookout for your upcoming releases. And don't worry, I haven't forgotten about Reborn. I'm still clearing my plate before I can dive into it!
October is very busy for me. Although I would like to touch back with my WIP, I have way too much stuff to do for my children's work, including a radio talk show for promoting. I also have to start booking schools so my 5am writing will have to be pushed back to November. BUT, I will be blogging about the fall and Harvest time because this is my favorite season.

I have to agree with everyone--your covers are awesome! I need to start planning my goals for October. I really want to get a lot done.

You are a busy author :)

October... Write 2 short stories and get at least 30K into the next Backworlds.

How exciting! I am constantly amazed at how much you get done. I am hoping to get 1/3 of my ms written in October. If I make my goal I will be thrilled. Good luck to you!
~Jess

You are simply brilliant! One of the most goal oriented person I know. All the best!

Good luck with your goals! My goal is to survive this week because 2 coworkers are now out sick. x_x

Hope you can make your goals. I'm planning on actually writing in October, starting on a new series. I've reached an impasse with my novel that requires serious rethinking of the last quarter to even write. Ugh. I hate when this happens.

Love the cover! It's awesome!

I love the cover. You always get so much done.

Good job with the edits. Great cover. You always have such wonderful artwork.

I'm bedazzled by your cover....just beautiful.

What a gorgeous book cover!!!

Congrats on finishing your edit, along with the first couple of proofreads! How cool that People of Foxwick and Their Neighbors will be out so soon. Good luck with it, as well as Remarked! :)

Brilliant cover artist indeed -- wow. It's cool to see our characters come to life when it's done right.

Yes, beautiful cover!! And great goals, looks like you're hard to keep up with! :)

You're busy. In a good way. Congratulations on all your hard work and achievements.