The race to save Sullyan and find the staff begins in Cas Peace's King's Artesan. The third book in the Artesans of Albia series, this novel picks up where book two left off. Peace has created a fantastical world. Her world-building and magic system are exquisite. I still enjoyed the characters, although I would've liked to seen a bit more of Taran, since he is one of my favorite characters. The villains are vile, and I wouldn't have them any other way. The start was a little slow for me, but it may have been because it's been awhile since I've read book two. This novel also brilliantly sets up the new challenges our heroes will have to face. If you love the Artesans of Albia series, then you'll enjoy King's Artesan by Cas Peace.

The Butcher by Jennifer Hillier

Step into the life of an aging killer in Jennifer Hillier's The Butcher. I don't often comment about covers, but I have to say I love this cover. It reminds me of Raymond Reddington from The Black List. Hillier knows how to create a mind-twisting thriller novel. Even though the killer is known from early on, the twists don't stop coming. A character-driven thriller, I wanted to learn more about the characters and couldn't wait to see how it would all come together at the end. I found it intriguing and refreshing to read a thriller about a serial killer where the motivation wasn't discussed. Killing was like eating. Something he had to do. The violence was kept to a minimum, which surprised me. If you're looking for a unique thriller, then go no further than The Butcher by Jennifer Hillier.

An American Girl in Italy by Aubrie Dionne

A trip to gorgeous Italy is the last thing Carly Davis wants in Aubrie Dionne's An American Girl in Italy. Dionne paints a beautiful setting in her newest release. I could feel, touch, taste, smell, and see the Italian architecture, landscape, and food. I wish this story could've come with a soundtrack, so I could hear the glorious music Carly's orchestra played. I could relate to Carly's career drive and how she hadn't given love a chance until she met the Italian hottie Michelangelo. Michelangelo's plight particularly captured my heart, so I rooted for him and Carly to get together. A sweet romance and strong on characterization, An American Girl in Italy by Aubrie Dionne struck the right chord with me.

The line between reality and fantasy is about to fall down for Daniel Byers in Steven James' Blur. This novel hooked me from page one until the very end. Like Daniel, I followed the clues to see who the killer was, and I enjoyed figuring it just a step or two ahead of the main characters. Of course, I had a feeling there was more to one character too than Daniel thought there was. I love the use of poetry and the strong themes of life and death and reality versus imaginary. A quick thriller, Blur by Steven James has me hooked on his new series. I'm already looking forward to the next book.

I would like to acknowledge a fellow writer and blogger-friend, R. Mac Wheeler, for reaching a monumental milestone: publishing his 24th novel. Yes, that is two with a four after it. I hope you'll visit his blog where he posts his photography and give him a congratulations (mention this post, and he’ll mail you a mobi copy of Book 1)…or visit his home page and peruse his titles, read an excerpt, and help him celebrate. You can purchase New Order Apocalypse 3 on Amazon. 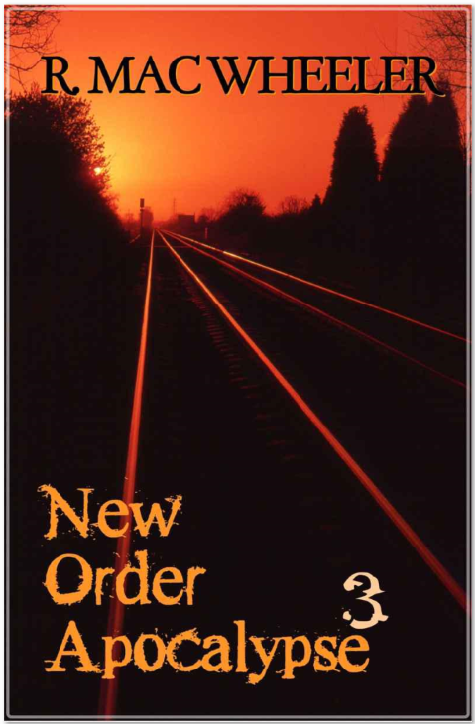 New Order Apocalypse 3
Chloe and Ginna Lee must decide whether to continue Jason's dream to unite survivors, or concentrate on surviving. Chloe hasn't the tact to play ambassador, and Ginna Lee is more likely to take heads than spread good will. Promises little hope they can build an alliance, especially if peace hinges on a cure for Jihad. Meanwhile, the landscape they must cross still writhes with roamers and desperate clans.

R. Mac Wheeler spins tales around rich, gritty characters with a lot of baggage, and puts them through a bit more grief than they can handle. His tone leans toward the sarcastic, passive aggressive.

It's Wattpad Wednesday, and I have a new chapter up for Reborn. Click here to start at the beginning or here for Chapter Three.

Today I'm over at these blogs for the Reborn Blog Tour:

Today's Reborn tidbit: Amorans tell time using hourglasses. They would have terms like hours and moments, but I knew they wouldn’t use “seconds” to denote time. So what words could I use to denote “seconds” but make it sound like their world? “Sand grains” popped into my head, since sand runs through an hour glass.

Already visited MJ and will visit Carolyn next.
Jennifer will be excited you liked her book!

Whew! So many wonderful new books to check out! How do you find the time to get through so many?

Oh I've been meaning to check out Jennifer's latest. Sounds awesome. And congrats to R. Mac! Wow, I knew he was prolific but that's amazing.

Thanks for the reviews—I'm always looking for new books to add to my To Be Read List.

24 novels?! I hope I can get to that point someday, but just getting the first one done is hard enough.

That has to be the most epic rundown of reviews, reveals, and releases I've ever seen. We should call this the Triple R! :)

Followed you on Wattpad. :-D

The Butcher sounds like something I'd love to read.

24? That's amazing. Simply amazing.
There are so many great new books to check out! Thank you.

I read Creep by Jennifer. She definitely found her niche by writing serial killer thriller. I've heard good things about The Butcher.

I aim to catch up with R. Mac. Some wonderful reads!

The Butcher sounds fascinating. Covers really intrigue me...I almost have a fascination with them. They're artwork!

Saw you on both C.M. and MJ's blogs. You're making quite the splash in the bloggosphere. From what I've seen and read, Reborn's going to be right up my alley. Heading to check out more over at Wattpad.

Great many books! Thanks for the reviews. <3 Reborn sounds fantastic!

Dang, 24 novels?!? That's super impressive. Sometimes I feel like I've been working on this first one most of my life. :-)

I'd love to read The Butcher because I really enjoyed Jennifer's first two novels. Blur sounds good, too.

I liked the use of sand grains because it to brought to mind the classic image of our life passing like sand in an hourglass. A big fantasy vibe!

Still loving your cover, every time I see it!! Hope you are enjoying your summer. Wow...there are a lot of books in the world, aren't there??!!

24 published books is impressive! Although, how long did it take to write these books? All I know is I'll be lucky to have written 24 books before I die, lol.

Cool recap of books. I enjoyed Blur and hope to read The Butcher.

Haven't heard of most of these books, but I did see An American Girl in Italy reviewed elsewhere, and I'm definitely intrigued!

Also, I love hourglasses, so what a cool tidbit today! :)

thanks for introducing me to these awesome books! i really like the sound of The Butcher! (surprised not so much violence, per the title!)

and lots of bonuses! thanks!