B is for Foxwick's Beginnings and Rachel Morgan's book cover reveal


B is for ... Foxwick's Beginnings

Once upon a time, an anthology was calling for assassin stories. Ooo, assassins. Sounds exciting, right? I knew I wanted to enter, but I wanted something different. For one, I decided my protagonist was going to be a woman. Since this was a fantasy anthology as well, I decided I wanted to create my own world.

I knew I wanted the world to be one with royalty, knights, dragons, and more. I searched a Fantasy Place Name Generator and thought about what I wanted to write. The assassin's name was easy: Umbria. The place became Foxwick. And through that anthology's request for submissions, a world was born filled with characters and places I'm still getting to know.

Now here is an excerpt from "Lady Death," the story that started a series. You can find the complete story in A to Z Flashes of Foxwick as well as Women of Foxwick.

Leon’s chest heaved. “I can’t lose her, sister. Our relations with Lochhollow are tepid at best, and they will attack Foxwick, if she ....”

And we have the cover reveal of Rachel Morgan's The Faerie Prince! 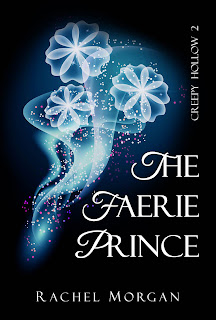 Title: The Faerie Prince
Author: Rachel Morgan
Publication Date: May 30th 2013
Description: Guardian trainee Violet Fairdale is just weeks away from one of the most important occasions of her life: graduation. After messing up big time by bringing a human into the fae realm, Vi needs to step up her game and forget about Nate if she hopes to graduate as the top guardian of her year. Everything would be fine if she wasn’t forced to partner with Ryn, her ex-friend, ex-enemy, current ‘sort of friend’. They might be trying to patch up their relationship, but does she really want to spend a week undercover with him for their final assignment? On top of that, the possibly-insane Unseelie Prince is still on the loose, free to ‘collect’ as many specially talented faeries as he can find—and Vi is still at the top of his list. Add in faerie queens, enchanted storms, complicated not-just-friends feelings, and a murder within the Guild itself, and graduation is about to become the least of Vi’s problems.

Add THE FAERIE PRINCE to your to-read list on Goodreads.
If you haven't yet read the first book in the Creepy Hollow series, THE FAERIE GUARDIAN, you can find it at the following places:


Amazon, B&N, Apple iBookstore, Smashwords
To connect with the author, visit Rachel Morgan's blog.
Posted by Cherie Reich at 8:00 AM

I adore the cover- actually all of her covers have been awesome!. thanks for posting.
~Summer

“I want you to assassinate Death.” Awesome. Also, love Rachel's new cover. It'll look so great next the the The Faerie Guardian. (:

Rachel had THE MOST awesome covers!

Gorgeous cover! and what a great marketing strategy to tie in your awesome Foxwick series with the A to Z challenge!

Thank you so much for sharing my cover! And I didn't know your whole Foxwick world was born out of a call for submissions to an anthology. Cool!

Interesting. Well-written and compelling, even though it's not really the kind of fiction I enjoy. Thanks for sharing!

Like the name Foxwick. I'll see during the month where you go and what people and creatures will emerge as you round out your story.

How fun to think the world of Foxwick came from anthology call for submissions!
Love Rachael's new cover, I didn't know about her first book so will now look forward to both. :)

How kind of you to share Rachel's cover reveal. May you have much fun and fulfilment with the alphabet challenge.

I love the name Foxwick! Definitely drew me in. It was awesome to find out what inspired your writing.

Rachel's cover is beautiful. Thanks for sharing. :)
~Jess

Love Rachel's cover. And thanks for posting more on the start of your story.

Really great cover and hmmm, not sure if Death can be taken down, but sure worth a try.

It was great to hear about how Foxwick started. And Umbria sounds pretty tough - I like her :)

Assassinate Death? That's quite a mission.

I love learning about beginnings. Thanks for sharing the story of how Foxwick began! And that cover is beautiful!

Awesome B post. Lady Death is still one of my favorites! Gorgeous cover for Rachel's next book. :)

Love Rachel's cover! Congrats to Rachel on such awesome cover!

I like hearing about how Foxwick got started. I liked the story snippet too.

I love the idea of assassinating death.

That last line of your excerpt, Cherie, is AMAZING! Such power in so few words. Thanks for sharing. It gave me goose bumps.

Looking forward to reading more of your posts this month and finding out more about Foxwick.

Plus, I love Rachel's new cover.

Wow! That is such a pretty book cover!

It's amazing how things get started, isn't it?

Great excerpt! No idea how she's going to pull that one off though ha!

On a side note, Umbria is also a super gorgeous region in Italy. It's where Assisi, my favorite place I've ever been, is located :)

I am fascinated by Foxwick. Over the last two days you have drawn me in. Assassinating Death must be a tall order, good luck to Umbria with that one ;)

Very interesting to know how and why you started the Foxwick series. :)

I love to hear how people's rich fiction worlds got started up :)

Wow, an anthology is what helped bring to life the Foxwick world? Very cool! This is just proof that you never know where or how inspiration will strike next. :)