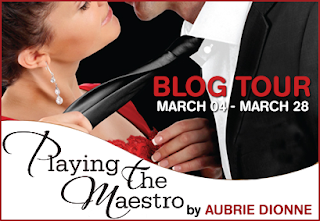 My Most Embarrassing Musical Moment
By Aubrie Dionne

Playing the Maestro starts out with Melody’s most embarrassing musical moment, and something I’ve always feared- not having your music on the first day of rehearsal. In fact, sometimes I check to make sure I have my music two or three times before I leave the house! In Playing the Maestro, the violinist, A.K.A. Melody’s ex claims he sent her the music and she lost it. See- he has a sister who wants Melody’s principal chair. So, what do you think really happened?

My most embarrassing moment was at a musical festival in high school. I was first chair in an All New England Band, and I had this solo in the middle of a piece after a whole bunch of measures of rest. I’m not sure what happened, because I’m usually a good counter- I use my fingers just to make sure I keep track by pressing down a key of my flute per measure. And, I’d nailed the solo in rehearsal. But, this time, during the concert, the measure seemed to go by too fast, and I missed the entire solo. There was silence when the flute should have been playing.

Usually the conductor has the soloists stand up at the end of a piece, but this time, he just went right on to the next piece. I’m not sure if he knew what to do about it, either. But, there was no standing ovation for me. I felt like crawling under my chair and dying. Not only that, but the second flute was good enough, she could have played it, and I bet she was wondering why she just didn’t pick up her flute and come in for me.

Music mistakes happen, let’s face it. The more you can look back and laugh at them, the better! If anything, it makes for a great story! 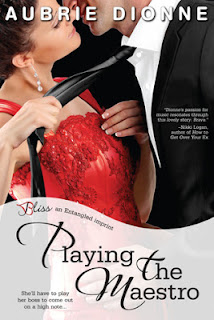 Melody Mires has sworn off dating musicians, but when the sexy European conductor Wolf Braun takes over her struggling symphony, her hesitation almost flies out the window with the notes of her flute—until he opens his mouth. Wolf is arrogant, haughty, and seems to have a personal vendetta against Melody. Oh, and he’s her boss. If she wants to keep her job as principal flutist, she’ll have to impress Wolf while simultaneously keeping her undeniable attraction to herself.
Wolf came to America to get as far away from his past as possible, and to recover some of the swagger he had as one of the world’s best maestros. He never imagined being forced to reassess the entire orchestra’s talent—and potentially fire anyone who doesn’t make his cut. Dating the attractive flutist is out of the question, but as their feelings reach a fever pitch, can they risk both their careers for a chance at love?

To Purchase: Amazon / Barnes and Noble

Aubrie Dionne is an author and flutist in New England. Her writings have appeared in Mindflights, Niteblade, Silver Blade, Emerald Tales, Hazard Cat, Moon Drenched Fables, A Fly in Amber, and Aurora Wolf. Her books are published by Entangled Publishing, Lyrical Press, and Gypsy Shadow Publishing. She recently signed her very first contemporary romance, Playing the Maestro, with Entangled Publishing, which will release in Feb 2013 and her YA sci fi novel with Spencer Hill Press titled: Frozen: Part One of The Timesurfers, which will release summer 2014. When she's not writing, Aubrie teaches flute and plays in orchestras. She's a big Star Trek TNG fan, as well as Star Wars and Serenity.

Thanks for hosting me today, Cherie!

Congrats to Aubrie! Good luck with your book.

Congratulations on the book, Aubrie! Fortunately, I never had any embarrassing moments like that when I was a flautist in an orchestra. But I played second flute, not first, so I didn't have any solos! (I was so terrified of being in the spotlight that I never even auditioned for the first flute position!)

Congrats! :) sounds like a great book- will check it out.

Congratulations, Aubrie! How brave of you to share your embarrassing moment.

Yep, that sounds embarrassing. I hope everything was alright afterwards. Congrats on the book!

Thanks to everyone who dropped by and commented!