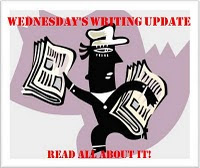 If you've been following this blog at all, then you'll know I like to re-evaluate my goals. I swear sometimes they change by the hour these days. My goals have changed again to some extent. Frankly, I was trying to do too much in too short of a time. Yeah, I have that problem, so I decided to simplify my life.

This month, I'm working on the short stories in Men of Foxwick. Before the end of February, I finished "Dragon Spy" and in January, I wrote "Blind Scribe." That means I have three stories to write before the end of the month: "Sword Master" (done!), "Courting Magic," and "Monster Hunter." Once I finish these stories, I'll do a self-edit and then send them to half my critique partners. Then, once I get them back, I'll do another edit based on their comments and send it to the other half. Another set of edits or two, then proofreading and publishing. If all goes as planned, people might be able to purchase Men of Foxwick in June. *crosses fingers*

As for everything else I had planned to do this month, it's now been shoved off to other months (Part III of The Phoenix Prophetess in April and The Loveless Princess in May).

I think simple will be better, right?

What are you working on?

By the way, there will be no more Friday Flash for a while, so I'll see you on Monday for Bookworm News.

And Susan Kaye Quinn has a new serial series out today! The first episode in The Debt Collector is Delirium.


From the author of the bestselling Mindjack series comes a new future-noir serial, The Debt Collector. The first episode, Delirium, launches today (3/20). 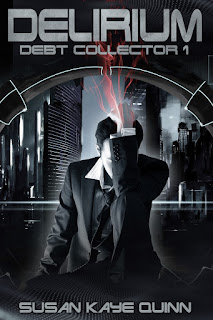 What’s your life worth on the open market?
A debt collector can tell you precisely.

Lirium plays the part of the grim reaper well, with his dark trenchcoat, jackboots, and the black marks on his soul that every debt collector carries. He’s just in it for his cut, the ten percent of the life energy he collects before he transfers it on to the high potentials, the people who will make the world a better place with their brains, their work, and their lives. That hit of life energy, a bottle of vodka, and a visit from one of Madam Anastazja’s sex workers keep him alive, stable, and mostly sane… until he collects again. But when his recovery ritual is disrupted by a sex worker who isn’t what she seems, he has to choose between doing an illegal hit for a girl whose story has more holes than his soul or facing the bottle alone—a dark pit he’s not sure he’ll be able to climb out of again.

Delirium is approximately 12,000 words or 48 pages and is one of nine episodes in the first season of The Debt Collector serial. This dark and gritty future-noir is about a world where your life-worth is tabulated on the open market and going into debt risks a lot more than your credit rating. You can find out more about the series at the DebtCollector website and facebookpage. The DebtCollector newsletter is a special list just for episode releases.

Early Praise
“The street-smart science of LOOPER meets the cold, just-the-facts voice of DOUBLE INDEMNITY in this edgy, future-noir thriller that will have you holding your breath, looking over your shoulder, and begging for more.” —Leigh Talbert Moore, author of The Truth About Faking, The Truth About Letting Go, and Rouge
“Do you owe more than your life is worth? No worries. A more deserving person than you can benefit from that excess life—and someone else will get paid with it. Enter the Debt Collector.” —Dianne Salerni, author of We Hear the Dead, The Caged Graves, and The Eighth Day (HarperCollins 2014)

The first three episodes of Debt Collector will be released a week apart, starting Wednesday 3/20. The remaining episodes will release every two weeks. Delirium can be found on Amazon, BarnesandNoble, iTunes, Kobo. Or add it to your TBR on Goodreads.

Susan Kaye Quinn is the author of the bestselling YA SF Mindjack series. Debt Collector is her more grown-up SF. Her steampunk fantasy romance is temporarily on hold while she madly writes episodes to keep Lirium happy. Plus she needs to leave time to play on Facebook. Susan has a lot of degrees in engineering, which come in handy when dreaming up dangerous mind powers, future dystopias, and slightly plausible steampunk inventions. Mostly she sits around in her pajamas in awe that she gets make stuff up full-time.
Posted by Cherie Reich at 8:00 AM

You are doing great with your goals! By planning too much, you're just testing your boundaries and pushing yourself. Can't wait to see those short stories come through the CP line!

I have read Delirium, but not this latest one. Adding it to my must read list now :) I envy your ability to write short stories; I can't seem to fit my characters into anything less than 60,000 words.

The book cover looks awesome- and Congrats on what you have accomplished Cherie.

Best of lucks to Susan. And a question for you, Cherie. Did you finish your story about Argos? I was sick for a while and I don't know if I missed it or you didn't continue. :)

Thanks so much for posting, Cherie!!

Sounds like you've got a good plan with your goals. So excited for Susan!

You're doing excellently. I can't wait to read MoF. I'm working on critiques this week and maybe a little writing for Harriet's story. Congrats to Susan!

My goodness, this one seems far afield from the tone of the other books. You're brave not to brand, and I hope this one does as well as the others, Susan. :-)

Lexa - One of the great things about going indie is the freedom to cross genres, mix it up, not having to stick with one story type. :) I think it takes bravery to publish at all. :)

I love juggling multiple projects at the same time, even if it does make me a bit nutty at times. Congrats on all your recent accomplishments!

My goals seem to be in constant flux, too. I'm still working on two short stories. I submitted one this morning. So I suppose I consider that one done. I hope to finish up by early next week so I can get to the novels waiting on my attention.

My goals constantly change, too! It is good to look at them and see if they are still on track. I was wondering how you would get everything on your goal list done the last time you shared (I was thinking maybe you never sleep)! This list sounds more manageable. :) Best of luck!
~Jess

Still sounds like you're ready to achieve alot! good luck with your edits :)

I can relate to the ever-changing goals problem. I don't really set myself concrete goals, but even my whimsy goals change about every week, lol.

Good luck with your writing and editing. You still get WAY more done than I could ever hope to!

I wish you luck in getting your stories out. And kudos to Sue, whose first installment I'm already reading.

Everyone feels the need to change their goals at some point. I think it's great that you have the foresight to know when and how to change them. Good luck wrapping up the stories for Men of Foxwick! :)

Happy writing. I go overboard with my goals sometimes. I just dropped one of my ROW80 goals to concentrate on the other two. I don't want to force anything out.

Congratulations to you on your progress and to Susan on her release!
I wish I could write short stories that quickly... Still trying to edit one for a competition!