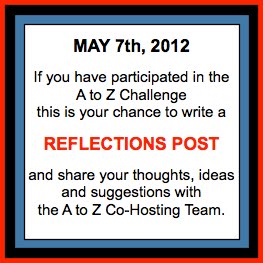 First off, I would like to thank our fabulous A-Z hosts for all their hard work.

None of this would be possible without them.

The end of April is always bittersweet. Although it's nice to return to a normal blogging schedule, it's fun to see people's A-Z posts as well as their themes. I noticed a lot more themes this year, and I had my own theme to write flash fiction within my fantasy world of Foxwick.

So the A-Z Challenge helped me create a flash fiction collection.

I tried to write all my flash fiction pieces before April 1st. Let's just say I was scrambling to finish them during that first week of April. Then, I edited them for the blog and proofread them for publication. I created new names because of the more difficult letters, such as Javen, Orin, and Quaylin. Through all that, I was working on my novelette Fighting Gravity, which officially was released May 1st.

Let's just say next year I won't try to release two books practically the same month as the A-Z Challenge.

I completely failed getting to a lot of blogs, but I'm so glad I got to the ones I did. If for some reason I'm not following you back, please let me know in the comments. I like to follow back, but sometimes I miss people.

There were a few blogs I read all their 26 posts.
Alex J. Cavanaugh - He featured bloggers and more!
Christine Rains - She had an awesome paranormal romance story. I couldn't wait to see what would happen next to Abby, Demetrius, and Tawa.
Fairview - She also was writing a paranormal story, featuring time travel.
Clarissa Draper - While she was gearing up for the release of her mystery novel, The Sholes Key, she gave us a real-life mystery every day.
Rachel Morgan - Rachel's Creepy Hollow series is fantastic, and she wrote flash fiction involving the creatures of Creepy Hollow.

Many more I dropped in when I could.

I also participated in the challenge with my book reviews blog, Surrounded by Books Reviews. My main reflection is there, but I featured authors every day, and it was a lot of fun learning about them.

I really did enjoy writing to a theme. I think next year I might write a YA Fantasy continuing story about Eirwyn. Her character fascinates me, and I enjoyed learning more about her through writing the flash fiction. I would also like to write the posts sooner, i.e. having everything written by early March instead of early April.

I want to plan less for April, so I can visit more blogs next time.

I'm not sure how the hosts could do better than they did for the challenge. Maybe if there were categories instead of a massive list, it might be easier to find bloggers with similar interests. At the same time, I do like the randomness of the massive list.

I can't wait for April next year!
Posted by Cherie Reich at 12:00 AM

Yes, I think the similar interest aspect you have mentioned would possibly be one for the hosts to investigate!

Well done on completing the challenge. I've been seeing a lot of reflection posts suggesting the categories idea, I hope they consider it. Would make things a lot easier.

I with you, I want to plan less for next April too so I can enjoy the month. Thanks for mentioning my blog. It's funny because I mentioned your blog too. By the way, I'll be finishing both of your gravity books today, I've already read one. I love the characters. I wish I could find out what happened to them.

you did an awesome job!

i read christine's story too!

I loved your A-Z theme! I think categories would be extremely useful, but that's just me :D

You had a great theme! So did several of the others you mentioned - I enjoyed reading the stories.
And thanks so much for visiting me every single time. You rock!

You are a dedicated blog reader! Great job with completing the A-Z Challenge. I look forward to participating next year.

Your flash fiction posts were awesome! Lots of fun. I didn't get to visit all the blogs either, and in my Reflections post on Wednesday, I suggest the same thing about categories/groups.

I didn't get to read all your posts for the challenge, but I did enjoy the ones I did read.

Wow, talk about a lot of work! I can't believe you attempted all that at once! I certainly could never manage it. I barely survived the A to Z alone. Way to go!!

How nice you read all 26 posts on all those blogs. It was quite a month!

Like you, I commented on categories and I've seen several others agree.

I loved your theme and look forward to seeing your future blogs. So glad I found you on A-Z.

Here's to next year!

Congratulations on your book release! How wonderful that a blog challenge could result in a completed book! I enjoyed your Flashes of Foxwick. And thanks for those blog suggestions. I followed Clarissa, Alex and Rachel, but will not check the others out.

Great reflections post! I love the randomness of the big list, but I think it might be cool to have a little note by each blog for genre of blog posts - like - writing, creativity, photography, etc.

Evalina, This and that...

Nice reflections post. I can't imagine doing more than one blog for the A-Z challenge. Kudos to you for managing it! Mine was focused on building interest in the book I released in late April.