My review of Nadine Rose Larter's Coffee at Little Angels is on Surrounded by Books Reviews.

Thank you to those of you who picked up a free copy of The Best of Raven and the Writing Desk by Lisa Rusczyk, Aubrie Dionne, and me. It's also up on Goodreads, so if you got a copy, be sure to add it to your list. Hope you enjoy!

Well, from the title of this post, you can see what I plan to do. That's right. I'm going to self-publish. True, I've been planning to self-publish some of my shorter works these past few months, but instead of releasing The Foxwick Chronicles: Women of Foxwick first, it will be my space fantasy romance novelette Defying Gravity.

Defying Gravity has had a rather rough start. I wrote it back in December 2009 and submitted to an anthology. At the time it was around 8500 words. It was short-listed in February/March 2010, but in January 2011 (yes, I had to wait an entire year to find out), the anthology was cancelled and all stories returned to their authors. *sighs* I couldn't give up on the story, so I spent two months editing it again. It grew to 10,500 words, and I submitted it to another publisher to become an ebook. I waited nine months without word and decided to withdraw my submission. During those nine months, I kept thinking about self-publishing it, but I wanted to wait and see. This month, I edited Defying Gravity again, adding another main character's POV and increasing the word count to 14,500 words. I decided to pitch it to another publisher, but it wasn't requested from the pitch. I then had a decision to make: self-publish it, find another publisher, or submit it the regular way to the publisher I pitched for a second chance (they were offering this). So I figured after two years and multiple edits (my poor CPs!), it is time to get the story out there.

I'm finishing up one more edit on it and will send it for a proofread. I'm working on learning formatting. I plan to publish it on Amazon first, so I can learn the other formats and eventually get it on Smashwords, Barnes and Noble, etc. I hope to have it ready to publish by mid-February (shooting for February 14th for a release date, but it's subject to change). Yeah, that soon!

Also, here is where you can help. I'd like to do a small blog tour and get some reviews ready to go up on Amazon, Goodreads, wherever else you want to publish them (I'll be happy to send you ARCs for the reviews, of course). Nothing too fancy, but something to get the word out. If you're interested, feel free to email me at cherie.reich(at)gmail.com, or comment below (be sure I have a way to get in touch with you).

Now, without further ado, here is the cover art (Thank you, Aubrie!!!) and description. 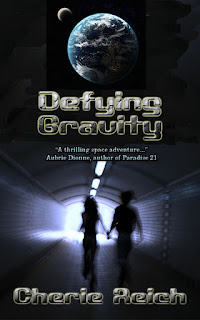 Homesick upon the SS Perseid, Linia, a young linguist, thinks she signed up for a mission of peace, but her crew members have another plan: attack the planet Medusa.

Bored with his dying planet, Alezandros, a space cruiser pilot, joins the Medusan army in his quest for adventure.

When the SS Perseid clashes with the Medusans’ army, Alezandros and Linia’s lives intertwine. Sucked through a wormhole, they crash upon a post-apocalyptic Earth and are captured by cannibals. In adjacent cells, Alezandros and Linia cast their differences aside for a common bond: escape. But when romantic feelings emerged between them, they might do the unthinkable because for a Medusan and a Persean to fall in love, it would defy gravity.
Posted by Cherie Reich at 8:00 AM

Congrats on your upcoming release! I love the cover and I can't wait to read your story=) you are more than welcome to use my blog to promote Defying Gravity. My email is terrri@elementsoystery.com

Hi Cherie! I'm willing to promote your story on my blog. You can email me at sherri.lackey(at)live.com I look forward to reading it!

I'd love to be a part of your blog tour!

Love the cover! You know you're always welcome on my blog.

I'm in too :) I would love to read it, review it, interview you--just let me know.

While my reading stack is full for the next month or so, you are WELCOME for your blog tour. I'd be happy to host you! Just email me: hartjohnson23(at)gmail(dot)com. Febb 22 is my only TAKEN day--I try to only do one guest a week, so you can choose the week before or after or any time in March (Tue-Thu get best readership) I wish you a ton of luck with it!

Space fantasy romance! You'll have a wide audience. Congratulations and sorry all of your efforts didn't pan out. (A year is a long wait!)
I am literally booked until the second week of May (scary huh?) but when you're ready to officially launch it, let me know and I'll give you a big shout-out on my blog.

Love that cover! And this CP doesn't mind at all. :) I loved seeing how the story grew and adding in the other POV was fantastic. It's an awesome story.

I'll do a review on my blog when you're ready for launch.

Sheesh, you waited a long time to hear from people about this novelette! But YAY you're doing it yourself now! And I'd love to help out with your blog tour :-)

I'd love to have you visit on your blog tour :). Email me at cheryl(dot)reifsnyder(at)gmail(dot)com. I'm excited to hear about your publishing journey!