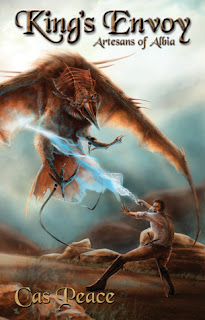 Series: Artesans of Albia, Book One
Author: Cas Peace
Publisher: Rhemalda Publishing (August 15, 2011)
Format: Paperback ARC
Source: Publisher
To Purchase: Amazon
Description: Taran Elijah's quest for knowledge uncovers a plot that threatens the world. In Albia, the fourth realm, the precious Artesan gift is dying. Although born to the craft, Taran is struggling to achieve his potential. Against his friends' advice, he embarks on a foolhardy plan to acquire the teaching he craves. Alone, he crosses into Andaryon, the fifth realm, but instead of finding a mentor, he stumbles upon a treacherous plot. In the wake of Taran's actions, Albia suffers a series of vicious raids. Major Sullyan of the High King's forces is sent to oppose them. But a dark and treacherous force is moving through the realms and both Taran and Sullyan will feel its power. Their craft, the lives of their friends, the very existence of their realm are under threat unless they expose and oppose the evil.
Click here for my review.
Posted by Cherie Reich at 8:00 AM