Be Our Guest: J.C. Martin and Her Favorite Things about Japan 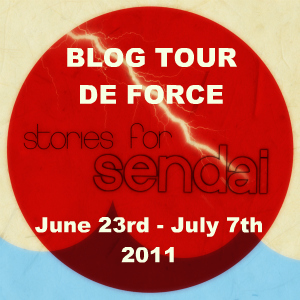 Please welcome J.C. Martin as she tells us what her five favorite things are about Japan.

Thank you, Cherie, for hosting this leg of the blog tour! When I tell people about my Stories for Sendai project, many people ask if I’m Japanese, and if I was compiling this charity anthology out of a sense of patriotic duty. Well, no, I am not Japanese, have not been to Japan, and I don’t even have any close Japanese friends!
However, when the earthquake and subsequent tsunami struck on March 11th, I was moved by news coverage of how strong and united the people of Japan remained despite the tragic disaster. Victims filed calmly towards evacuation centres, queued patiently for emergency supplies, and showed a brave and united front in the face of terrible adversity. No chaos, no riots, just a quiet determination to rebuild their shattered lives. It is the same silent strength that saw the country through two atomic bombs, and many other earthquakes before this one.
As a tribute to the country and its remarkable people, I thought I’d dedicate this post to Japan, and to share with everyone my 5 favourite things from the Land of the Rising Sun:
5. Sakura

Pitcure source: http://hubpages.com/hub/Travel-sakura
I’m no flower aficionado, and I probably can’t tell an acacia from a zinnia, but in my opinion, the distinctive white or powder pink petals of the cherry blossoms make them one of the prettiest blooms in nature. If I were to ever visit Japan, I’d like to go in spring, when the streets are lined with blossoming cherry trees. To have a hanami (literally “cherry blossom viewing”, a traditional practice of picnicking under a sakura) while the trees are in full bloom, breathing in the fresh perfume of the flowers, basking in the balmy spring sunshine, would be a heavenly experience.
4. Budo

Picture source: http://en.wikipedia.org/wiki/File:Sensei_iaido-rework.jpg
As a martial artist, I prefer the more fluid Chinese kung fu to the harder Japanese art forms, but I can appreciate the discipline and dedication required to master one of the many budo, which literally means “martial way”. From the ubiquitous sport of karate to the mystical art of ninjitsu, from the awesome power of the sumo to the sword-wielding iaido, there are dozens of different martial arts styles: aikido, judo, kendo, jujitsu...the list goes on!
3. Mount Fuji

Picture source: http://youleisuretime.blogspot.com/2010/10/japanese-natural-art-mount-fuji.html
Remember that earlier image of a hanami under a sakura in springtime? Now imagine the scene with Mount Fuji as a backdrop, with its near symmetrical volcanic cone and its snow-tipped peak. *sighs*
2. Sushi

Picture source: http://www.howtomakesushi.info/
Never has (mainly) raw fish tasted so good! I could eat an entire salmon as sashimi (sliced raw fish)! For those of you who’ve never tried it, I highly recommend you give it a go: not only are the ingredients fresh, but with zero oil used in preparations, it is super healthy! Start with something cooked, like the unagi nigiri (eel served on a cake of vinegar-ed rice) and work your way up to the raw stuff!
1. Takeshi Kaneshiro

So there you have it, my 5 favourite things from Japan! What are yours?
Stories for Sendai are now on sale here! Why not get a copy (or two) now? All proceeds go towards aid efforts in the earthquake-hit regions in Japan! Also, there is a prize draw! You can find the contest details and full blog tour schedule here.

And, if you haven't yet, don't forget to purchase your copy of Stories for Sendai today.
Posted by Cherie Reich at 8:00 AM

I love the sakura, too. So beautiful. My husband would go right for the sushi, though! I like Japan's work ethic. Imagine what the whole world could do with such determination and strength.

Thank you, Cherie for allowing me to hijack your blog, and thank you for updating the post after I sent you the incomplete document! D'oh! :)

Japan is awesome...and dude that guy is hot!

Those cherry blossom trees are achingly gorgeous. I would love to visit Japan someday.