Today Elana Johnson’s Possession finally comes out! I feel like I’ve been waiting to read her book forever. *laughs* In honor of her book’s birthday, Ali Cross, Nichole, and Windy are hosting a Possession Blogfest. First, though, here is what Possession is all about: 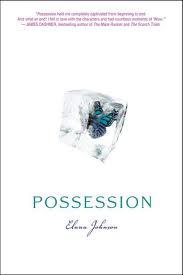 Vi knows the Rule: Girls don’t walk with boys, and they never even think about kissing them. But no one makes Vi want to break the Rules more than Zenn…and since the Thinkers have chosen him as Vi’s future match, how much trouble can one kiss cause? The Thinkers may have brainwashed the rest of the population, but Vi is determined to think for herself.
But the Thinkers are unusually persuasive, and they’re set on convincing Vi to become one of them….starting by brainwashed Zenn. Vi can’t leave Zenn in the Thinkers’ hands, but she’s wary of joining the rebellion, especially since that means teaming up with Jag. Jag is egotistical, charismatic, and dangerous: everything Zenn’s not. Vi can’t quite trust Jag and can’t quite resist him, but she also can’t give up on Zenn.
This is a game of control or be controlled. And Vi has no choice but to play.
And here is how I, a good girl, broke the rules:
My friend used to tell us a lot of hard-to-believe stories. I wanted to believe her, but at the same time, I didn’t want to believe such bad things were happening to her. Our other friends decided not to believe her and kicked her out of the group. I stuck up for her, so we both ended up ostracized for about a month.
This meant we couldn’t eat lunch in the cafeteria any more.
The way high school dynamics worked was everyone had a place in the cafeteria based on where they sat the first day or two. You didn’t switch places, and there weren’t empty chairs to go elsewhere without pushing into someone’s territory. We lost our spots and had nowhere to go. So we took to the library.
Every day we would get a pass to go to the library during lunch. This worked fine, even though not eating lunch could be difficult. We managed, though.
Until the day the library was closed.
We couldn’t go to the library. We couldn’t sit with our former friends at lunch. We were outcasts in a no man’s land. We had to break the rules and stick to the hallways. If we were caught, we certainly would get detention. We had to find somewhere to go where no one would find us.
With pounding hearts, we hid in the stairwell near the locker rooms. We just talked and stood there, waiting for the thirty minutes of our rule-breaking to end.
There was one thing we didn’t count on. The wrestling team had an away game. They were leaving during our lunch period. They had to walk right past us to get to the bus.
We held our breaths and pressed against the wall. If a coach or student happened to glance our way, we would’ve been in big trouble. I had an English teacher who told us that everyone got detention at least once during high school. I didn’t want to be that girl in detention. It was a challenge I wanted to go against. (Now I realize he probably was just scaring us, but still.)
One glance and it would be all over.
The cold tiles pressed against my back as I watched them walk through that door. We did catch one glance from one of the hottest guys in the school. Luckily I was in classes with him. He just smiled and went on.
The last student left, and we released a sigh of relief. No one caught us. We had broken the rules and lived to tell the tale.
Posted by Cherie Reich at 8:00 AM

I love your rendition of this!! Glad you lived to tell you tale.

What a rebel lol. Yay for Possession! I can't wait to read this.

You rule breaker, you! *LOL* I loved to spend my lunch breaks in the library. Sure, you couldn't eat in there, but you could sneak snacks in!

I can't wait to read Possession! Congrats on The new release. Glad high school is behind me, btw=)

OH NO!! I've seen movies where the cafeteria is heavily delineated, but I don't remember that from my school. Maybe I blocked it out? (no comments on my age, but yeah, maybe I just forgot...) How awful!
erica

Cherie! This could have been right out of a novel! Great entry, I loved it!

Naughty, naughty! And awesome description. You must be, like, a writer, or something. Thanks for joining us today.

Glad you didn't get caught! I broke a school rule once by bunking a class and hiding in the bathroom with my friends. Other kids did it all the time, but we were the type who NEVER bunked, so we spent the whole time being terrified of getting caught and didn't enjoy our "free" lesson one little bit!

What a tension filled story! And what a nice guy! There should be more like him out there ... Lol! Glad you didn't get caught!