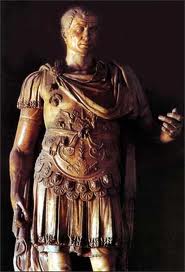 I’ve always adored history, but one of the most fascinating persons from history for me has been Gaius Julius Caesar.
Julius Caesar was born on July 13, 100 BCE and died on March 15, 44 BCE, or on the Ides.
A lot of legends swirl around this historical figure. He was rumored to be descended from Venus (a rumor I think he started). As a young man, he was kidnapped by pirates and vowed to return to kill every one of them after ransom was paid. He kept his word on that one. He was a brilliant military tactician, and he had enough charisma to sway the Plebs and many others. Seutonius wrote he was a man to every lady and a lady to every man.
He was practically unknown until 60 BCE when he jumped into the political spotlight. That’s right. He was forty when he got into politics and launched his fast-pace career.
Of course, he is most famous for the way he died by assassination. Although Shakespeare did him a disservice when he said Julius Caesar’s last words were “Et tu, Brute” (Latin for “And you, Brutus”). According once again to Seutonius, his last words were more likely “Kai su, to tekon” or “And you, my child” in Ancient Greek.
If I could meet one person in history, he’d be near the top of my list.
Posted by Cherie Reich at 8:00 AM

Email ThisBlogThis!Share to TwitterShare to FacebookShare to Pinterest
Labels: a to z blogging challenge, history lesson, j is for julius caesar, knowledge

Intriguing - thanks! Shakespeare isn't the go-to guy for historical accuracy, for sure.

My mother is not a writer, but her one foray into short stories and speculative fiction was a class assignment where she wrote a story about a time-traveling Julius Caesar ... who was very upset that with all his accomplishments, all they did was name a salad after him.

My husband and I just watched the entire Rome series from HBO, and although I'm sure it was full of historical inaccuracies, I thought it was fascinating. It seems like he was a really brilliant leader.

I love history. Julius Caesar is definitely one of the most intriguing people from history!

One of the best eras of history... I loved Julius Caesar when I was a kid.

History is so fascinating. Sometimes more so than fiction!

History never seemed interesting when I was young, and now that I appreciate it, I've forgotten everything I learned. *sigh*