K is for Kindle and Wednesday's Writing Update

*Hi to my fellow bloggers! I apologize for not commenting much. April has been crazy so far, but I hope to reach everyone soon.* 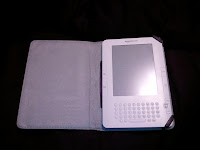 I own a Kindle. True, it’s not the spiffy new version, but I received mine as a Christmas gift in December 2009. The first book I bought was Stephen King’s Ur. It also was the first book I read on my Kindle and loved it. Then I read Stephen King’s Under the Dome on my Kindle, and boy, am I glad I did! Why? Have you seen the length of that book? It’s over 1,000 pages, and my poor wrists, hands, and arms couldn’t have held that thick of a book, since I read it for hours on end for days on end until I finished it.
Before I got my Kindle, I would’ve said I prefer print books. As a collector, I do prefer print books. As a reader, I prefer reading on my Kindle. It’s convenient, doesn’t weigh much, and I can read and eat my lunch without losing my page. The last is a big bonus in my book.
I know it isn’t for everyone, but I do enjoy mine. For the people who own ereaders, which one do you like and why?

Now on to Wednesday's Writing Update.
I was very bad last week. I blame the allergies and working six days at the full-time job. I got little to nothing done.
On the start on Monday, I decided I had to change things up. I'm limiting my email/blog time, so I can write and edit. I did manage to write a new scene in Virtuoso, critique two friends' work, and edit for PWP on Monday.
Tuesday, I finished writing the new chapter six in Virtuoso and worked on the outline for my fantasy short story “Mage Game.” I critiqued a friend’s work and critiqued for PWP.
Today, I plan to do much the same: work on Virtuoso, begin writing “Mage Game,” and critique/edit some work. The Book Bloggers and Publishers Conference also begins today, so I’ll be participating in that as much as possible.
I also decided yesterday to cut the original chapter two from my first novel, The Phoenix Prophetess. I love that chapter, but it really doesn’t add anything that I don’t mention later. In fact, it probably tells a little more than I want to reader to know, so it’s got to go.
As writers, do you often realize yourself scenes that have to go? Or do you rely on someone else to tell you? Or is it a mixture of both?
Posted by Cherie Reich at 8:00 AM

Email ThisBlogThis!Share to TwitterShare to FacebookShare to Pinterest
Labels: a to z blogging challenge, k is for kindle, writing

I don't have a kindle yet but I do use the kindle app on the iPhone. Now read more there than in print!

You're a good self editor. I admit, I'm not that great yet, but I'm getting better. It helps if I put down a manuscript and come back to it a week or two later. Then I'm not so personally involved and I can edit myself better.

Like you, I love to collect books. But I like to read both kindle and books. Kindles are great for large books, but for lighter reading I prefer a physical book.

Sounds like your doing great on your edits. Good luck. Keep up the good work.

You're right, sometimes certain scenes don't work and just need to be cut. I save them in a separate file though, I don't delete them.

A mixture of both- usually description wise- I can be so proud of a certain description but it ends up lending nothing to the story so I have to chop it out.
Happy writing!

I am currently eReader free but I do have plans to invest in a Kindle soon because there are some books I really want to read that are only available in eBook format.

As I am currently without any CPs, I have to rely on myself to know when a scene has to go. I was doing a lot of chapter/scene cutting in my WIP a couple of months ago. Hated to lose them but it worked best for the overall story.

Can't wait to own a Kindle!

Usually, it's some clever reviewer who lets me know when something needs cutting from my WIP.

I think a Kindle would solve all my problems. I don't read because: a) I simply can't get to the bookstore often enough to restock and b) it's hard to read secretly in the dark. A Kindle lights up! Alright, I need one of these. Now.