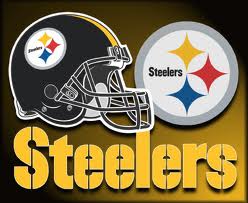 Yes, I will admit it. I am a football fan. Come Sunday from the end of August to the beginning of February, I am sitting in front of the television and watching the NFL. The team I love the most: the Pittsburgh Steelers.

I live in Virginia, and I grew up with "are you a Redskins or Cowboys fan?" I was neither. Still hate both those teams. Why a Pennsylvania team? Why the Steelers?

First off, my ancestor William Penn founded Pennsylvania. Yeah, I have cool ancestors, and when I have traveled in Pennsylvania before, I fell in love with it. I felt a strong connection, and it is as much of a state I love as my very own Virginia. If I could live in any other city, it would be around Philadelphia, I loved it so.

So, why not be a fan of the Eagles?

It's because of one man. Number 43 of the Steelers. Troy Polamalu. 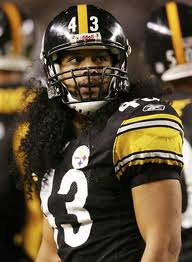 The first time I really watched a NFL football game, it involved the Steelers and someone else. Troy Polamalu intercepted the ball and ran it for a touchdown. His abilities and catlike grace sent shivers up my spine and goose bumps up my arms. From that moment on, I knew the Steelers was my team.

I have to admit I didn't know Troy's name for a long time. He was affectionately known as "Furry Guy" to me. He really does have such beautiful hair. *sighs* And, I've never seen a better defensive player.

Since I grew enamored first with Troy and the Steelers and then football in general, I can speak with the best of them on the subject. I remember names, games, teams, and the NFL commentators have to stop saying the same things I do seconds after I say them. I'm wondering if I'm being watched. The same thing used to happen with me and Simon Cowell when I watched American Idol. Weird, right?

And, I do have some Steelers gear. I own a shirt, jacket, and keychain. I even have a Steelers tissue box. *blushes*

Anyways, you have to imagine how excited I am that the Steelers are going to the Super Bowl. Come February 6th, I'll be sitting at home watching the game and cheering on my team.

Go Steelers!
Posted by Cherie Reich at 8:00 AM

I just can't get into football, but it is a family requirement that I support the Browns. Not that they'll ever make it to the Super Bowl! ;)

Aww, poor Browns! Maybe the new coach will be better. I heard they fired the other one. You never know.

I think it helps to cheer for a team. If you can get behind one, then it makes it more enjoyable. I've found that if you play sports yourself, it can be easier watching a sport (I used to play soccer and love the competitiveness of it). Plus, listening to the commentators and learning how the game is played is a big bonus too. Without it, it's easy to get lost and not enjoy it as much.