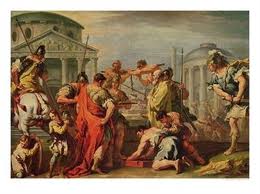 "While these proceedings were taking place at Veii, the Citadel and Capitol of Rome were in imminent danger. The Gauls had either noticed the footprints left by the messenger from Veii, or had themselves discovered a comparatively easy ascent up the cliff to the temple of Carmentis. Choosing a night when there was a faint glimmer of light, they sent an unarmed man in advance to try the road; then handing one another their arms where the path was difficult, and supporting each other or dragging each other up as the ground required, they finally reached the summit. So silent had their movements been that not only were they unnoticed by the sentinels, but they did not even wake the dogs, an animal peculiarly sensitive to nocturnal sounds. But they did not escape the notice of the geese, which were sacred to Juno and had been left untouched in spite of the extremely scanty supply of food. This proved the safety of the garrison, for their clamour and the noise of their wings aroused M. Manlius, the distinguished soldier, who had been consul three years before. He snatched up his weapons and ran to call the rest to arms, and while the rest hung back he struck with the boss of his shield a Gaul who had got a foothold on the summit and knocked him down. He fell on those behind and upset them, and Manlius slew others who had laid aside their weapons and were clinging to the rocks with their hands. By this time others had joined him, and they began to dislodge the enemy with volleys of stones and javelins till the whole body fell helplessly down to the bottom. When the uproar had died away, the remainder of the night was given to sleep, as far as was possible under such disturbing circumstances, whilst their peril, though past, still made them anxious."
Juno's sacred geese save the day! My favorite part of the story.
"A meeting of the senate was now held, and the consular tribunes were empowered to make terms. A conference took place between Q. Sulpicius, the consular tribune, and Brennus, the Gaulish chieftain, and an agreement was arrived at by which 1000 lbs. of gold was fixed as the ransom of a people destined ere long to rule the world. This humiliation was great enough as it was, but it was aggravated by the despicable meanness of the Gauls, who produced unjust weights, and when the tribune protested, the insolent Gaul threw his sword into the scale, with an exclamation intolerable to Roman ears, "Woe to the vanquished!""
How much are lives worth? According to the Gauls, around 1,000 lbs. of gold.
"And so it was that, defeated, captured, ransomed, we received such punishment at the hands of gods and men that we were a lesson to the whole world. Then, in our adversity, we bethought us of our religious duties. We fled to the gods in the Capitol, to the seat of Jupiter Optimus Maximus; amidst the ruin of all that we possessed we concealed some of the sacred treasures in the earth, the rest we carried out of the enemies' sight to neighboring cities; abandoned as we were by gods and men, we still did not intermit the divine worship. It is because we acted thus that they have restored to us our native City, and victory and the renown in war which we had lost; but against the enemy, who, blinded by avarice, broke treaty and troth in the weighing of the gold, they have launched terror and rout and death."
It's all over.
"But gods and men alike prevented the Romans from living as a ransomed people."
Or is it?
"Was it possible for Gauls to overthrow Rome and shall it be deemed impossible for Romans to restore it?"
No, it wasn't. The Romans eventually defeated the Gauls and fought for their eternal city.
The Romans overcame adversity and an almost certain lost of their city. This story was one of the ones that made me proud to be learning about the Romans in college. It was the one story that stuck in my mind the most. You hear of the great power that was Rome, but this story reminded me that it was almost over before it started. The sacking of Rome also stuck in the Romans' minds, and it started their vast quest for expansion out of the fear that someone bigger and better might take over. Never again were they going to allow it, and they fought for their safety for many more hundreds of years.
Posted by Cherie Reich at 8:00 AM

I love history. My forte is the Middle Ages, but I appreciate ancient history as well. I love doing research.

I love history too. My knowledge of it, though, dwindles after the fall of the Roman empire and picks back up in Colonial times. I blame that partly on school. For one, I majored in Classics with a minor in the Ancient Near East. For two, in high school, we always ran out of time to learn much from the end of the Roman empire to the Colonial times. I do find the Middle Ages fascinating, and I like the early 1000s for Norse history, too, but I don't know them as well as I wish I did.

Warfare is a fascinating subject. Despite the dubious morality of using violence to achieve personal or political aims. It remains that conflict has been used to do just that throughout recorded history.

Your article is very well done, a good read.