When I realized that I wanted to write about an immortal falling for her enemy without realizing it, I thought I could go a bit further than only making it a factional thing.

I also knew that I didn’t want to go with the usual Urban Fantasy menagerie of immortal creatures. (Although some sneaked in regardless.) So that meant that I needed to think a bit further than the usual meaning of immortal.

See, I realized the immortality itself could serve as a cause for the enmity between the factions. If, for example, one faction needed the other to remain immortal.

Then I started thinking about human folklore and how a lot of it was symbolism for something else. And thought: What if some of the magical creatures I like were in fact symbols for my immortals?

What would being a phoenix entail? Rebirth. Fire. But then fire power would have to be something reserved for an elite class or the enemy faction probably wouldn’t do all that well. BUT. A phoenix’s ability to be reborn was the key to what my other faction wanted.

The idea of making the other faction griffons just basically came to me because I love griffons and always wanted to write a book with them, but just never got the chance. To me, being a griffon was about power. Strength. Speed. Flight. But then I also gave their power this one serious limit. They can live a long time, but not forever.

Unless they steal power from phoenixes.

And that power is incredibly addictive.

Which basically formed the basis of my factions. There’s a lot more to the story, of course, but you’d just have to go read the book.

Have you ever had to create a new being for your stories? How do you approach it? 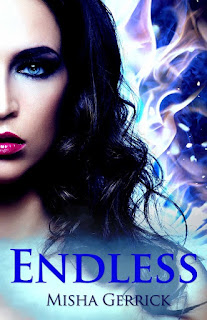 Misha Gerrick lives near Cape Town, South Africa, and can usually be found staring at her surroundings while figuring out her next book.

If you’d like to see what Misha’s up to at the moment, you can find her on these social networks: Tumblr | Twitter | Google Plus | Writing Blog 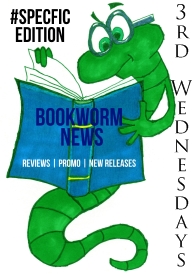 BOOKS READ
Big Burning by Christine Rains
Martinis with the Devil, Part One by A.A. Chamberlynn

Susie Russell can't imagine losing her heart to a Bigfoot skeptic in Christine Rains' Big Burning. Susie clings to her stubborn side when it comes to the man she once loved. Brach Stevens thinks he has nothing to apologize for. These two people ignite the passion and bring the fire in this third installment of the Sasquatch Susies series. Rains definitely turns up the heat between these characters--sometimes quite literally. This fast-paced story quickly made it my favorite of the series, and I loved the sweet ending. I recommend Big Burning by Christine Rains to all who enjoy some paranormal with their adult romances.

Martinis with the Devil, Part One by A.A. Chamberlynn

Zyan Star gets a job offer she wants to refuse in A.A. Chamberlynn's Martinis with the Devil, Part One. Zyan is a bartender, a bounty hunter, and a soul-eater. Despite being eternally damned, she might be heaven's only hope. I loved how Zyan plays off Eli, the angel, and the other characters in the story. Zyan is one fierce fighter with a sarcastic edge, but she genuinely cares about her friends. The story line is fast paced and keeps me wondering what will happen to Zyan, Eli, and her friends. The world building ignites the reader's imagination and has a smorgasbord of different supernatural creatures. Part One ends in a cliffhanger that'll make the reader what to pick up Part Two and keep reading to find out if they can save the Holy Representative or will all Hell break loose. I recommend Martinis with the Devil, Part One by A.A. Chamberlynn to urban fantasy readers who like strong heroines.

#SPECFIC BOOKS RELEASING IN MAY
The Square Root of Summer by Harriet Reuter Hapgood
Court of Mist and Fury by Sarah J. Maas
The Rose and the Dagger by Deckle Edge
Admiral by Sean Danker
Parallels: Felix Was Here by Various Authors, including me
The Map of Bones by Francesca Haig
The Star-Touched Queen by Roshani Chokshi
The Hidden Oracle by Rick Riordan
Mer-Charmer by Amy Bearce
True Born by L.E. Sterling
Reflection: The Stranger in the Mirror by Rachel R. Smith
Cloaked in Blood by T.F. Walsh
Lois Lane: Double Down by Gwenda Bond
The Queen’s Dance by Jamie K. Schmidt
The City of Mirrors by Justin Cronin
I, Human by John Nelson
Echoes of Silence by Elana Johnson
The Fireman by Joe Hill
Places No One Knows by Brenna Yovanoff
The Paladins by Julie Reece
The Haunted Stepsister by Medeia Sharif
Soldier by Julie Kagawa
Enemy by K. Eason
Scarlet by Rachel Morgan

I was over at the Untethered Realms' blog last Tuesday (May 10) promoting Parallels: Felix Was Here. I have instructions on how to make your own paper frogs. Today (May 18), I'm on Crystal Collier's blog with two truths and a lie.

For this month, Reborn is only 99c, and you can purchase it on Amazon.com, Other Amazon Retailers, Google Play, iTunes, Kobo,Nook, OmniLit, and Smashwords.
Posted by Cherie Reich at 8:00 AM

Wahoo! Yay for Misha! I like the idea of immortals who are codependent. Oh wait, I write about those too. Misha and I just might be writing twins. ;)

I was just at Crystal's blog! Congrats to Misha. Phoenixes v griffins sounds exciting to me. Both books reviewed here sound excellent.

Thanks for the awesome review! I loved Alexia's book too. Creating new being is fun. I start with a little idea, one trait or a concept, and just go from there. Love your idea for factions, Misha!

Nick, I enjoyed writing about them, so I hope readers like it.

Thanks Christine. Starting small and working bigger is a good way to approach fantasy, I think. :-)

I love that Misha uses un-traditional fantasy creatures for her story. And I love that it originated from folklore.

And, as always, Cherie, thanks for the reviews...

I love the idea of finding new ways to write about creatures and immortal beings. The possibilities are limitless. =D

I love the way your mind works, Misha! Thanks for sharing the complexities of your ideas :)Super stuff!

And it makes sense, too. Looks like you and Cherie both used Phoenixes.

Yes, they are, Patricia.

Thanks Nicola! My mind is indeed a unique one.

Yes we did, Diane. And yet the two are so different from each other. :-)

Thanks so much for having me over, Cherie!

Griffins and phoenixes are awesome! I have a phoenix shifter in my current WiP.

Thanks for the shout out, Cherie! So happy you enjoyed Martinis :)

Cherie, great that you're hosting Misha! Her novel does sound amazing doesn't it?

Wow. I'm very impressed, Misha. You have really analyzed your way into the story and the characters. As Denise says, the novel does sound amazing, enough for me to check it out.

I enjoyed reading about your thought process and the conception of your book, Misha. So clever. I love phoenixes and think it's great that you created a story around them and their immortality.

I only tried to create a new being once, and it was sort of by accident. I love your thought process here though...I'm intrigued:)

I need to read this! I did once a long time ago, but only the beginning. I have to see what happens.

I think what Misha did was very clever. She took stealing immortality one step farther and made it an addiction. Great idea! Wishing her much success!

Thanks Chrys. I had fun changing up the folklore a little bit.

Mark, usually my creations are all a little accidental.

Mary that's right. I think I sent you the first few chapters once.

Thanks Lexa. Just thought that the addiction aspect made the story more interesting.

I've always enjoyed writing about immortal beings. The way immortality (or lack thereof) affects a character is fascinating to explore. Misha's twist on phoenixes and griffons sounds like a lot of fun!

Congratulations to Misha, and a great twist on the premise!

I would like to live in a world where I could steal power from a Phoenix. :) Congrats Misha!!!!

Another congrats to Misha on her book! Griffons are fascinating creatures, to be sure.

Thanks for sharing and best of luck to Misha!
~Jess

Misha, congrats! Your book covers just keep getting better and better, too.

Good review.
I like the blue feeling on the cover.