Since this month is NaNoWriMo, I've been busy working on two novels: Reigned and Reforged. I have also spent work days finishing my edits on Reborn, which I hope to be ready to send to beta readers by November 25. *crosses fingers*

With this month being so busy, I've realized I need to give myself more time for things on my to-do lists. Just because I have a day job I can sometimes edit/write/blog at, it doesn't mean I have eight hours of uninterrupted time to do my other work. I was thinking next year that I would try to publish four works a year, but now I'm thinking two to three might be more feasible, so it's changed up my goals a bit.

Here are my December goals:
Since next week is Thanksgiving in the States, I'll be taking the week off, so I'll see you next time on Monday, December 2nd. 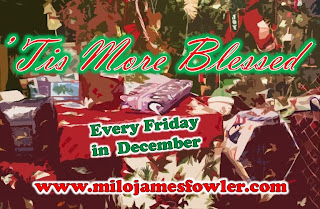 Milo James Fowler is hosting a 'Tis More Blessed giveaway every Friday in December. Many authors, including myself, will be giving away books, so if you'd like to sign up and learn more about it, please visit Milo's blog here.
Posted by Cherie Reich at 8:00 AM

It is nice when we have a job that allows us to do other things, but we can't do those things all the time.
Enjoy your week off and Thanksgiving! I'll post one more time this month on Monday and then not again until December.

Best of luck with all your goals. Enjoy your time away!

Good for you--taking a break. I should follow your example, but I'm not that smart. At least, not this year. ;)

Am amazed that you're getting so much writing done with your job. Hopefully one day I'll be able to say the same. I have a post scheduled for Monday but that's it for me for the week. Have a good break and good luck with your goals.

Good luck with your goals! Hopefully you'll have a relaxing Thanksgiving week so you can attack those December goals. :)

Wow, you're not kidding when you say you're busy! Even though 2-3 books a year is smaller than your original goal, it's still so incredibly impressive to me. Many people have trouble releasing just one book a year, after all! Wishing you the best of luck with all your December goals. With all your determination, I have no doubt that you'll succeed!

Wow! Good luck with everything.

All the best with all your goals, Cherie!

I wish my job was half as forgiving, unfortunately it works the opposite eating into free time :S I love that you can set your goals out so logically

Have a great Thanksgiving, and thank you for your support, Cherie.

Glad you like my little children's stories, Cherie Wish we had your Thanks giving celebrations over here, too, it sounds fun.

December is a pretty hectic month in itself and you have some pretty hefty goals there. Wishing you much luck with them.

Keep up the good work, Cherie! I sometimes get some editing in during my lunch break, but I'm usually grading papers. Not complaining -- as a teacher, I get 3 months off every year, and I pack them full of writing/revising/subbing.

You are so focused, Cherie. It was after reading your goals that I decided to stick to a goal and I want to thank you! It worked! Happy Thanksgiving!

Wow! When you list your stats for the year it is amazing. I find it so hard to get all the writing done that I want to because of my day job. Especially now that it is so dark when I get home from work- it really makes me so tired! Best of luck on your goals.

You are amazingly productive.

Have a wonderful Thanksgiving!

Congrats on your 160k written! Those sound like excellent goals. Hope you had a great Thanksgiving! :)

I think two or three books published in a year is a good goal. I aimed for three at the beginning of this year and managed two. I hope you've had a good Thanksgiving break :-)

Awesome stats - those are impressive, lady! I think it's wise to give yourself room to maintain that balance too. :)