This will probably come as no surprise, but I'm changing up my plans/goals again. *sighs*

The first couple weeks of August threw my goals out the window. I was supposed to finish up the last four short stories in Neighbors of Foxwick, but it didn't happen. In fact, I only finished my rewrite of "Dragon's Sacrifice" on Sunday, and I still have three more short stories left to write ("Mourner's Lament," "Prince's Price," and "Love's Challenge"). I had originally planned to publish Neighbors of Foxwick in October, but that's not happening. I don't want to rush the stories just to have them finished. Of course, if I push back Neighbors of Foxwick, then that means I can't publish People of Foxwick when I originally planned either.

Of course, all these dates are subject to change, but by reexamining my schedule, it has made it easier on me to get everything I want accomplished. As for the rest of the month, I'm working on editing the first half of Reborn based on critique partners' suggestions and rewriting/writing the rest of Part I of Reforged.

So does that mean I won't have anything else published this year?

I want to start getting word out about Reborn, even though it won't be out until next May. It's my debut novel, and I think it's pretty special, so I've decided to take a short story I wrote back in 2010 based in that world (just 700 years earlier) and publish it as a freebie (story has had extensive edits since then and is going through my critique partners again before a final edit/proofread from me). This story is called "Magna's Plea," and it's about 5,000 words in length. I will have a sneak peek of Reborn with the short story as well. Since Amazon can take awhile to price-match a title to free, I plan to publish "Magna's Plea" in September with an official release date in October. Next week, I'll have information on how you can help me spread word about "Magna's Plea."

Here is what "Magna's Plea" is about: 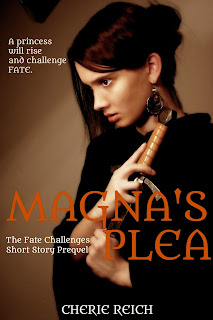 So what are you up to this Wednesday?

By the way, several of us spec fic authors with Untethered Realms took up the prompt "awesomesauce." Stop by the blog to see what it is.
Posted by Cherie Reich at 8:00 AM

Cherie, your writing goals cause a heavy dose of envy in me. I feel I need to buck up with my goals.
Like the sound of Magna's Plea.

Goals? What goals? Hm ... one would be to get Yonahlossee Riding Camp out of mind. Don't wanna write like that. To me, the story lacks humor and the sex scenes lack any element of romance -- not that they're intended to, but still....
On a positive note, now I've got a title I like for my longer-than-a-short-story. Arielle and the Wolf sounds like it ought to be something paranormal, though it's not. It would be nice to complete the draft by this time next month.
Magna's Plea sounds good. Tenacious Teens are my kinda girls.;)

Even though you may shift the posts, the fact is that you always have direction... clear goals in mind! So admirable!
Writer In Transit

And I thought my planner was full! You continue to inspire me!

Very cool! Dig the cover art.
Smart not to push yourself. Quality is always more important.

Sometimes it's best to delay goals if the timing isn't working. Good for you for having goals. My goal is lame-take off Labor Day weekend-it'll be my first since the end of June and so needed.

Glad your rearranged schedule makes you feel more sane. Send me the stuff about your freebie. I'll post it up on my blog. I'll be back to posting to once a week.

Smart move on the freebie short story. :) It works. It does.

I love that cover! And it's an incredible story too. It's rough having to rearrange your schedule, but we all understand. Besides, you're so busy, you need time to just relax sometimes.

Goals have to be fluid, otherwise they hang around our necks and drown us ... go for it!

Love that you set such extensive goals, so much easier to get somewhere when you know where you want to go! Good luck! Let me know what you need, my blog is yours!

My goals are always changing. I figure as long as I keep having goals and pushing myself, I'm good. :) love the cover!

Oh and let me know how I can help!

Oh that cover for Magna's Plea is really gorgeous! Glad to be able to give you some input about the story. :D

change of plans....it' just a round about thing isn't it?

The great thing about being indie is that we CAN change our writing and publishing plans :-) And it sounds like a great idea to put out a freebie short story to start getting the word out about The Fate Challenges series. Very cool :-)

Sounds like you have a hundred and one things to do this year. Best of luck with getting everything done. :-)

The Fate Challenges sounds good. Can't wait to read them.

I love the cover you have, that is amazing. Do you have a computer program you use or something else?

All writing work tends to be felixable and gets rescheduled. Just a part of writing I think.

Great cover! I love that you change your deadlines for yourself as needed. Life doesn't always go the way we plan it to go- so making necessary changes is SO important. Great idea about publishing the short story for free to help create buzz. :)
~Jess

Cherie- you are always so organized with your writing goals I want to be just like you when I grow up! I couldn't even find the time to write all summer long. I'm going mad. I wish I could be more like you and just meet half of the goals you set for yourself.

Love the cover for Magna and I think the free story is a fantastic idea. Let me know how I can help spread the word.

My plans are always changing. Life is just so hectic, we have to move with it don't we?

The cover for Magna looks great!

One of the only constants in life is change, right? Good-looking cover!