D is for Why Dragons? 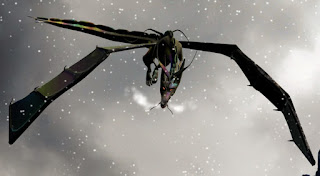 Dragons have long been a fantasy staple. The legendary creatures come from all over the world. They’re like dinosaurs with wings and fire-breathing capabilities. So when I decided to create Foxwick, I knew there had to be dragons.

The dragons within this world are a mixture.

Some dragons are very wild and have lost their ways to converse with each other—and humans. They’ve lived alone for so long they are vicious beasts that will fiercely protect their territory at all costs.

The other dragons are more sophisticated. They can speak through their minds to other dragons and special humans, known as dragon seers. Very few dragons live in packs, but the arctic dragons in Snow Mountains live together under a dragon queen.

In the stories “Dragon Seer” and “Dragon Spy,” I have dragons as main characters opposite of their dragon seers. And in the forthcoming Neighbors of Foxwick, a dragon will be the lone main character in the story "Dragon's Sacrifice."

What do you think of dragons?
Posted by Cherie Reich at 8:00 AM

I haven't written dragons in my fantasy work. I did actually start to introduce them but I never had any real idea what role they would play. Honestly I think when I get around to rewriting I might remove them. Or else I'll have to find some way of weaving them in. Or make them not quite what one expects of a dragon.

I do love dragons though :)

I love dragons, and I love to read about them, but I have never written anything about a dragon. :)

Dragons are fascinating. You can take the mythos in so many different directions.

Some dragons are cute!

I desperately want a pet dragon or two. Or, you know, three or more.

I just read Mel's post where she asks "Where are all the dragons in fantasy these days?" Look - I found some!

I love dragons! My letter D was also for dragons, but mine are of the steampunk variety which I'm also including in one of my works of fiction. I have dragons littered throughout my house, staring at me from bookshelves and desks. One can never have too many dragons lying around:)

Very nice...you gotta have your dragons.

I love dragons. My favorite is Mr. Dragon from the classic Mac game The Manhole. I have the updated, color version on my phone now, but it's not the same as the trippy black and white original. Mr. Dragon was a lot cooler in the original.

Dragons are great because they are between science, myth and fantasy - dinosaurs anybody? So I always think of them this way. Cheers

I totally love dragons and it's fun to have them as the main characters.

I was sort of introduced to them in the 4th Harry Potter book, but they really didn't have a starring role there. I would love to read more about them in the future.

I love dragons. They are so fun.

I love dragons. You definitely have me intrigued now. :-D

What can I possibly think of dragons? We are mysterious, powerful, (some, wise) we can fly and have other hidden skills. He are resilient and we definitively rock. ;)

I'm going to have to investigate the insecure writer's group as I've seen it mentioned on a number of blogs. Thanks so much for visiting today...I have never read much in the fantasy genre, but the A-Z every year always inspires me to check some out.

Good luck with the challenge!

I love dragons! A dragon seer character sounds so interesting, too. I look forward to it :)

You know, I am looking forward more and more to reading these books. Long live dragons!

Had trouble getting to the comment form. I am a dragon fanatic, anything with dragons in, I am there. I have just purchased the first of the Foxwick Chronicles for my Kindle and will look forward to reading more of them.

JO ON FOOD, MY TRAVELS AND A SCENT OF CHOCOLATE

I LOVE dragons! They're one of my favourite mythological creatures. I love your two different takes on them. :D

I don't think I've ever read a story with a dragon as the main character. I like the idea of it though. It sounds interesting.

Dragons are interesting creatures. I see Al has already been here :)

I've read my crit partner's novel that includes a dragon, but he's not the main character.

Dragons you ask? Love them! Do you watch the British Merlin show? I like the dragons in that show.

Love the concept that you wrote from the Dragon's perspective. I've only seen that one other place and loved it. Here is a link to that short story if you want to check it out: http://www.tor.com/stories/2012/07/brother-prince-snake

I love dragons! I really enjoy the stories where they're not always portrayed as the villain. I need to check out your series for sure. :-)

I love dragons! I love reading about them and seeing them in movies! (even Reign of Fire, which everyone seemed not to like!)
I don't feature dragons in my fantasy yet. I'll need to come up with my own twist first!

Dragons are cool. I like your description of them.

I like dragons, especially Asian dragons as they take on a slightly different appearance to western dragons. It's interesting how different cultures interpret dragons and how they get used in fantasy. They are great creatures to focus any story on! ;)

I do wonder where dragons came from in the first place. I like to see them depicted somewhat differently as in eastern cultures.

Dragons are always amazing, and Im sure your portrayals will be too :)

Dragons are awesome! I think it's so cool that you have some in your Foxwick world. I really love the back-story behind yours! :)