An Excerpt of Dariel Raye's TORIN


Mother Nature is Fighting Back!

Meet the “Dark Sentinels.” Weary of shedding tears over the senseless murders of her children, thoughtless abuse of her resources, and blatant disrespect for her authority, she had to take drastic measures. Mother Nature created sentinels to protect and preserve nature, their first priority to stand vigil against those responsible for the destruction of wildlife.

Two sentinel wolf-shifters are born to each pack – male and female. Larger, stronger, and faster than other shifters, and able to shift at will, regardless of the moon’s phases, they risk their lives daily to restore balance between man and nature. Unfortunately, their very strengths have gained the attention of arrogant beings bent on exploiting their abilities for selfish gain.

Forced to leave their packs for a time to find mates, the sentinels are no longer able to avoid human contact. Dr. Sable Adler, of “Dark Sentinels Book One: Sable,” alpha of the Washington pack, one of the largest packs in the United States, was the first sentinel to fall in love with a human female. He’s a calm-natured Libra, while Torin DuMont, of “Dark Sentinels Book Two: Torin,” is a hot-headed, bad-tempered Scorpio alpha who resides in the Florida Everglades.

Like Sable before him, Torin is about to find himself in uncharted territory when he seeks the legal counsel of Stephanie Bates, an uppity human lawyer who needs his help more than he needs hers… 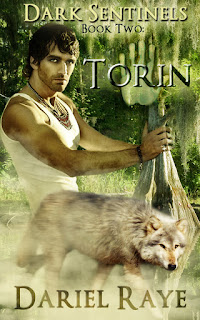 When greedy land developers set their sights on Dark Sentinel land, Torin turns to attorney Stephanie Bates for help, but she’ll need his protection to stay alive long enough to save his land.

Real estate lawyer, Stephanie Bates, has risen to the top of her field through meticulous sacrifice and goal setting. She has no time for distractions – and that includes pets, messy relationships, and loose ends.

Torin DuMont is a forensic scientist who chose the profession to avoid dealing with people as much as possible. Raised by a stepfather who hated him, he’s been forced to live a life of solitude, fueled by anger and distrust. When wolves and shifters start turning up dead, Torin must battle an enemy bent on destroying those he was born to protect. His greatest challenge, however, is Attorney Bates and the surprising effect she has on his heart.

Short Excerpt
Torin  sensed the sun had gone down before he stepped over to the small window and looked out. Even in the complete darkness, his eyes did not fail him, and he saw the grounds as clearly as if daylight greeted him. Finally, one man remained in the waiting room with him, but it was well after six p.m.
He picked up the pleasant scent of mint, lemongrass, and lilies and turned just in time to see shapely legs, a voluptuous body full of promise. The warm, mocha-colored face wasn’t bad either. Clearly, it was the owner of the musical voice. His wolf bristled beneath his skin, forcing an internal battle just to remain civilized. Confusion increased his frustration. He’d never reacted to a female this way before, and certainly not a human.
She glanced at the other client and headed straight for Torin, arm extended to shake his hand as she called over her shoulder, “Go on home, Cindy. It’s already late. No need for both of us to stay.”
Cindy was out of the office in a flash, glancing back apprehensively as she closed the door.
“Mr. DuMont? I’m Ms. Bates, Stephanie Bates.”
Torin nodded and grasped her hand but did not return her smile. He was far too busy trying to resist the crippling effect her melodious voice seemed to have on him. His nerve endings sizzled as he attempted to manage the sensory overload. This isn’t supposed to happen, he secretly seethed. What in the hell is wrong with me? His sexual encounters had been quick, unemotional, and necessary for physical satisfaction only, and he’d never been overtaken so--completely. Her scent intensified, tinged with desire, as molten chocolate-colored eyes gazed at him confidently, only confusing him further. Desire?

Post a comment on this blog with your email address and click here to enter the Rafflecopter giveaway (“Torin” tour Rafflecopter) for books and gift cards.
Posted by Cherie Reich at 8:00 AM

I like how the writing appeals to the senses (especially smell). I totally get that.

Sounds super interesting and intriguing! Thanks for sharing!

Sounds interesting. I like the writing style. Thank you for sharing.

Hmmm...sounds good. Will have to check it out.

Great premise and so well told. I love the human traits in the Dark Sentinel, "weary of shedding tears".
Well done.

Hey, Cherie, and thanks for hosting us. Also, thanks to everyone who stopped by. I love comments :-)