Today's #fridayflash was actually a short story I wrote a long time ago. I've decided to break the story into three parts, so here is part two. Part I was up last Friday (February 15), and Part III will be up the Friday (March 1) after.


Panic twirled from person to person as infectious as the flu. A scream here. A shove there. Mayhem reigned while compassion for fellow man halted. This very terror seized me by the throat. I twisted and pushed my way through the crowded hallways while attempting to contact Bethany and the kids with my wristscreen.

A hazy image appeared, but I couldn’t hear her tiny voice over the discord.

“I’m coming, sweetie, stay where you are.” I punched in a button for her location. A little red dot blinked in Sector C, Section 3. What was she doing in our room still?

I reversed course and jogged against the current heading toward Sector E.

When my feet left the floor, my first thought was someone deactivated the gravity sensors, but I was falling, not floating. My arm struck the wall, smashing my wristscreen. Instinctively, I grabbed hold of the man beside me, and we both tumbled, barely missing being squashed by three people.

The alarm faltered from wail to sickly whine. The lights stopped blinking. The dim glow of emergency lights was all we had left.

I scrambled to my feet. Pain spread from my wrist through my arm, but I clutched the appendage and continued toward Sector C.

When I arrived there, silence descended. A ghost town had sprung up in this residential corner of the spaceship. I listened for people as I raced toward Section 3. Turning a corner, I arrived there. A slow burning fire crackled from ripped wires. Smoke obscured my sight, and I felt my way towards our rooms.

I recognized that voice, and it clutched my heart in a vice.

“Jax,” I called to my son, shoved away a fallen panel, and entered our rooms.

The smoke was thicker in here, causing me to cough. I blinked back the tears when I saw Jax, Lara, and April huddling next to Bethany.

Dark blood oozed from a gash in her forehead. The sight stole my breath away, and I tumbled to her.

“Bethy, sweetheart,” I whispered, slowly checking to see whether or not she was alive.

She moaned and I could breathe again. I ripped a piece of table cloth and wrapped it around her head. Our children looked fine, scared, but fine. I lifted Bethany into my arms and looked at them.

“Jax, you and Lara hold April’s hands. We’re getting off the Argonaut.”

“What happened to mommy?” Lara asked, her eyes wide and pooling with unshed tears.

My heart ached for them. “She’ll be fine. We gotta go, though. Follow me.”

Seven-year-old Jax took three-year-old April’s hand and five-year-old Lara did the same. I ushered my three children out of Section 3 as we trekked toward Sector E.

And speaking of science fiction, have you seen the fantastic cover art of Alex J. Cavanaugh's CassaStorm? If you haven't, then you don't have to wait any longer because it's here. *grins* 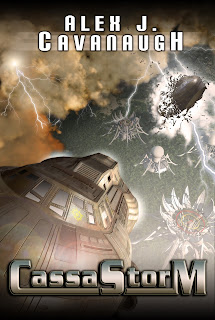 Byron thought he’d put the days of battle behind him. Commanding the Cassan base on Tgren, his only struggles are occasional rogue pirate raids and endless government bureaucracies. As a galaxy-wide war encroaches upon the desert planet, Byron’s ideal life is threatened and he’s caught between the Tgrens and the Cassans.

After enemy ships attack the desert planet, Byron discovers another battle within his own family. The declaration of war between all ten races triggers nightmares in his son, shaking Bassan to the core and threatening to destroy the boy’s mind.

Meanwhile the ancient alien ship is transmitting a code that might signal the end of all life in the galaxy. And the mysterious probe that almost destroyed Tgren twenty years ago could be on its way back. As his world begins to crumble, Byron suspects a connection. The storm is about to break, and Byron is caught in the middle…

Very exciting scene - I can't wait to see what happens next!

Alex is three for three. The man has some awesome covers!! :)

Love the flash fiction, I am curious to know whether they get off the spaceship.

Wanted to cry when I read "Mommy." is it next Friday yet? =)

What a great way to introduce his cover with a little scifi of your own. You left it hanging- good job though on the tension in this piece.

Wow, your scene was riveting!!
Thanks for posting my cover this morning. You rock, Cherie!

I'm loving this story! So heartbreaking and exciting. :)

And here I am for the second installment of this thrilling story. I am your fan, Cherie! Big fan, indeed. Keep them coming!

Congrats to Alex on CassaStorm - the cover is awesome!

Really enjoyed this weeks scene. Can't wait for next Friday.

The cover art is very nice.

I can empathize with things spreading like a flu.

Touching scene with a lot of anxiety. What will happen to your little family in Secion E?

Part II is so intense! I cannot wait for part III to see if they all end up okay in the end...

Alex is all over the blogosphere today!
Such a great cover!

I'm totally hooked on this story and can't wait to see what happens next! You do a great job bringing your character's emotions to life!

and Hooray for Alex!!!

I am enjoying the story in installements! Lots of action! :) Can't wait for part 3.

How sad for those poor children. Great job showing that!

The Ninja is everywhere in the blogosphere these days :D

Trying to figure out how I missed this last week - and this week. (grumble)

Great job setting the stage for the final escape! (and the cover's pretty cool, too)