IWSG: NaNoWriMo time again and a look back #ResurrectionBlogfest

It's NaNoWriMo season again. So I'm typing my fingers off in rewriting The Phoenix Prophetess. When NaNo comes around, I think back to my previous NaNos. I've been participating since 2009 and so far have won NaNoWriMo every year. I hope this won't be the year that I don't. I must admit I'm worried about it. Typically, I block off my schedule so all I have to do is write, but this year I'm working on publishing The Nightmare Collection and working on blog tour posts and the like while trying to do NaNo. So to say that I'm insecure about NaNo this year--and everything else I need to do--is an understatement. 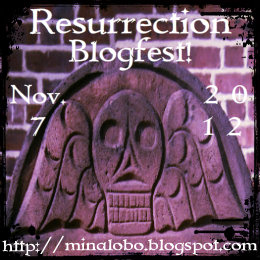 To give myself inspiration, I joined the Resurrection Blogfest hosted by Mina Lobo at Some Dark Romantic. The goal is to find a post from something from your first year of blogging that you believe deserves some TLC, or that you're especially proud of and wish to showcase, or simply has sentimental value for you. And since I needed some NaNo inspiration, here is a post I posted on November 30, 2009.

Yesterday, on November 29, I completed the first draft of VIRTUOSO. The novel was 68,176 words long, 25 chapters (prologue + 24 chapters), and 302 pages double-spaced. VIRTUOSO is the first book in the Riverwood Trilogy. I plan to write book two next year and book three the year after that. I do not know if I will continue to use the Riverwood Trilogy as my NaNo 2010 and NaNo 2011 books yet.


I was more excited in finishing VIRTUOSO than I was finishing THE PHOENIX PROPHETESS back in September. When I finished VIRTUOSO, I was absolutely thrilled and excited. When I finished THE PHOENIX PROPHETESS, I was wondering what in the world I had gotten myself into. Of course, Prophetess was my first novel ever completed, so perhaps that is what made it so different. I'm really proud of myself. I've written two novels in less than a year's time. I honestly never thought I would be able to finish one novel.

I have also created a little book cover for VIRTUOSO. Here it is: I believe the picture I found is just perfect for the novel. Several times, Nadia compares her life to a jigsaw puzzle, and she is a violin virtuoso. The cover art is mainly just for me, but I thought I would share it.


On other writing news, now that December is heading in tomorrow, I need to get back to real writing life. *laughs* I have 2-3 short stories I would like to write for by the end of December. Plus, I will begin doing my rewrites/edits for THE PHOENIX PROPHETESS and begin on the plot outline for THE PHOENIX SORCERESS. I need to read through my previous short stories as well once more and send them out again next month. Fun, fun!

I still like the picture of the puzzle violin, and it's amazing how much Virtuoso will change when I get back to rewriting it. It started out as a YA Paranormal, book one of a trilogy, to YA Contemporary, standalone novel. And I never did get The Phoenix Prophetess rewrites done until this NaNo. Hopefully. *crosses fingers*

Have you looked back on old blog posts to see what you'd hope to do or look back on those small accomplishments that meant the world to you? Please be sure to visit the other Resurrection Blogfest members as well as the other IWSG members.

And I would like to dedicate this post to my guinea pig Abby. She passed away on Saturday. I had her for almost five years, and she was almost six years old.

Just focus on the things that matter and I have no doubt you'll win NaNo again!

I'm so sorry about Abby. She was a cutie.

You made me tired just reading about all of the things you are working on for NaNo. What kind of multi-vitamins do you take? I think I need to grab onto some of your energy!! LOL

Best of luck with everything you do this month!

It is so sad to miss a loved pet, I feel bad for you. You have a lot going on so good luck! Remember it is not the winning that is the most important thing, it is daring to try :)

Of course you can do NaNo and WIN, don't be a silly. Take deep breaths and hang in there.

): Sorry to hear about Abby.

Don't get too worried about NaNo, I'm sure you'll get through it, you're one determined writer and you'll do great!

Sorry to hear about Abby. =(

Best of luck with NaNo. I can't even imagine trying to do it while publishing and promoting another book but I'm sure you'll do great.

Aww, I'm so sorry again about Abby. I've no doubt she had a great life with you and your family!

Thanks for sharing this resurrection post, it was inspiring just to read it!

Best of luck with NaNo! I'm terribly behind, but every word counts!

I love you Abby GP - I lost two of them this past spring.

Popped in from the Resurrection blogfest ~

I have no doubt you'll defeat the NaNo challenge. I'm know you're really busy, but you've always amazed me with what you can do. :)

Good luck with NaNo! I hope you win! But if you don't, just consider the other things you're accomplishing this month: lots of writing, publishing a book, and a blog tour! Doing all that in just 30 days is amazing, whether or not you hit that 50,000 word mark.

Ha! I remember that blog post! Look how far you've come from then! I love looking back to see just how far my journey has taken me.

Aw, I'm sorry to hear about Abby. We used to have guinea pigs--they're sweet animals.

Sorry to hear about your guinea pig. My condolences for you loss....

I really haven't looked back at old blog posts, yet because my blog is still relatively new (since May 2012). I will likely do just that next year when a lot of things have progressed beyond where I am now. It should be fun to see how far I've come, like rereading an old diary/journal entry.

Very sorry about the loss of your pet. As an animal lover, I offer my sympathy and thoughts.

And even way back in your resurrected post, I still admire and am inspired by your writing productivity! Great job on all the creative work you've given the world!

As for NaNo, even if you don't win this year, you shouldn't let that discourage you. To me, NaNo is more about getting the motivation to write 50K instead of actually reaching 50K. As great as it would be to reach 50K and win, simply knowing you pushed yourself to work more because of NaNo is something to be proud of!

The best of luck for this years nano! Im sure you will easily reach the 50k :)

Aw! It is so hard to loose a pet. I'm so sorry for you. About your post, NaNo is a hard thing to do and you should be proud of every page you move along. I'm sure you'll win again. Best of luck!

Nano is for brave, daring souls like you. I'm sure you'll survive this round as usual!

Hugs, I know how it feels to lose a pet.

All the best with your NaNo projects!

It seems we're all trying to squeeze so much into so little time. I don't even attempt NaNo.

Sorry to hear about your guniea pig! I haven't visited any old posts for a while but as part of my The Big Smoke blog tour, I pulled out my diary from the year I turned 18. Wow was that a trip down memory lane! Best of luck with nano this year! :-)

What a fantastic idea to reflect on previous NaNoWriMo's. Good luck this month.

I'm so sorry about Abby. *hugs*

Oh my gosh, I'm so impressed by how much you are doing. I opted out of NaNo this year because of the amount of work I have to get done before the Make Believe launch. Eek!

I'm sorry to hear about Abby :(

Very sorry to hear about your guinea pig's passing :( Poor little poppet. Of course, she is at peace and it's the ones left behind who are sad! I have lost a few dear pets so I know how it is.

Gonna go visit your old post where it was originally posted :)

you are always writing your fingers off! and that cover - impressive! love it!

Good luck with your writing!