Today I have a special guest post from Aubrie Dionne. Her YA Science Fiction Romance novel Colonization came out earlier this month, and Aubrie's here to talk about the indigenous species on Paradise 21.


The indigenous species on Paradise 21

Paradise 21 is an ironic name, because in many ways, it’s not a paradise at all. It’s a dangerous, primal planet with its own defenses against invaders. And despite several scout droids sent out to take samples, the crew of the New Dawn has no idea what’s in store.

For instance, Trillium Bisonate is a man eating flower with tentacles spewing from its oversized blossoms. It can pull a person in and consume them over thirty days, turning their bones to sludge with its acidic digestive system. Andromeda has a run in with these large flowers in a tense scene towards the beginning of the book.

Earth will never be recreated, and so the humans left alive after the planetary apocalypse have to make do what they can find. Each substitute planet has its own drawbacks and dangers, and they are only just discovering what Paradise 21 will bring. 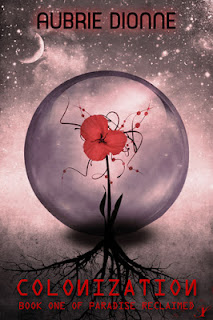 “Forbidden love on a paradise planet that’s anything but paradise...Dionne’s Colonization will keep you guessing.” – Cherie Reich, author of Defying Gravity (That's right, folks! I blurbed it!)

Finding a new home has never been so dangerous.

Andromeda has spent all seventeen years of her life aboard a deep space transport vessel destined for a paradise planet. Her safe cocoon is about to break open as Paradise 21 looms only one month away, and she must take the aptitude tests to determine her role on the new world and her computer assigned lifemate. As a great-granddaughter of the Commander of the ship, she wants to live up to her family name. But, her forbidden love for her childhood friend, Sirius, distracts her and she fails the tests. The results place her in a menial role in the new colony and pair her with Corvus, “the oaf”.

But when Andromeda steps foot on Paradise 21, her predestined future is the least of her worries. Alien ghosts from a failed colonization warn her of a deadly threat to her colony. And when Sirius's ship crashes on the far ridge in an attempt to investigate, she journeys to rescue him with Corvus.

Andromeda now must convince the authorities of the imminent danger to protect her new home. What she didn't expect was a battle of her own feelings for Sirius and Corvus.

Can she save the colony and discover her true love?

You can buy the book at:
Amazon
Barnes& Noble
InkspellPublishing

I LOVE this kind of science fiction. Great guest post!

Thanks so much for hosting me, Cherie! Good to know people are seeing my book in a lot of places!

Oh this sounds really cool! Thanks for sharing :)

I basically met Aubrie through you, Cherie, and now that I know of her, I see her books everywhere. :) It's wonderful seeing a successful author and knowing we can all get there.

I remember seeing this cover! I love it and the book sounds fascinating. I look forward to reading this one. :)
~Jess

Sounds like a good read, Aubrie. Good to see you here.

This sounds great! I also write about weird and wild futuristic plants, and I do love a space opera!

This sounds dark and mysterious. I also like the names of planets and characters used in this book. It's great seeing Aubrie here.