Fantasy Chat: Cover reveal of RISE OF THE MAGI by Jocelyn Adams

I'm so excited to reveal the cover art for Rise of the Magi by Jocelyn Adams. I completely love the Lila Gray series, and I can't wait to read this book. It has adventure, suspense, romance, and hot fae folk. And now you have time to catch on the series before book three comes out in June! And I have to say this is the best cover of the three. I love it! 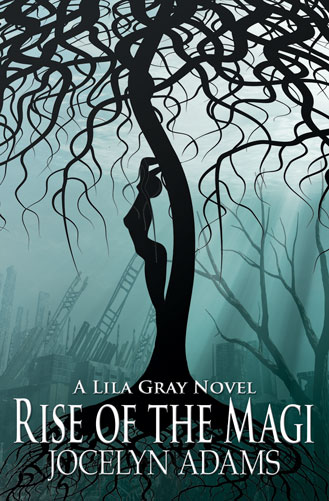 Rise of the Magi

A Lila Gray Novel #3
by Jocelyn Adams
Release Date: June 4, 2013
Target Reader: Adult
Keywords: Fantasy, Fairy
Back of the Book
In a battle of wills, who is strongest? The one who hates or the one who loves?
In a test of faith, who will fight the hardest? The one who has everything to lose or the one who believes only in herself?
For Lila Gray, the answer is both.
For the Magi, the questions are pointless since they can’t lose, and they’ve been waiting since before Lila’s birth for this one moment.
Lila only needs to find them to understand her entire purpose in life.
This time, though, instead of protecting her people, Lila may be leading them all, including her unborn child and the man she loves, to their deaths — and not by accident.
In the ultimate trial of heart and soul, and the conclusion to the Lila Gray series, Lila will learn that the greatest weapon of war is herself, with one ultimate unknown.
For which side will she fight?
URL: http://www.jtaylorpublishing.com/books/28

It's a cool cover!

That is an awesome cover!

I do really like that cover. It's quite interesting. And I'm all for some hot fae on fae action.

Wow, you're not kidding -- that cover rocks! Thanks for posting, I have not heard of this series before!

That cover is amazing! Gorgeous use of silhouette and how the tree and human figure literally merge together. It's stunning.

Really intriguing cover. For some reason, it reminds me of Green. It has a similar, elegant feel.

That cover it hot!

And great job with NaNo so far.

This is a fantastic cover! Silhouettes never fail to be eye-catching, at least to me!

That is a gorgeous cover! grabbed my attention immediately, great blurb too definitely drawn in...