Friday Excerpt: Nightmare Ever After

If you missed Chapter One, you can read it here.

(By the way, if you haven't read Once Upon a December Nightmare and don't like spoilers, then you might want to hold off on reading this.) 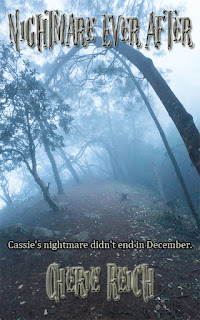 Cassie Richards tapped the pencil’s eraser against the desk as the seconds ticked down to the end of the school year. Her U.S. History students rustled their test pages and filled in the tiny bubbles on the scantron. One by one, they finished and placed their tests upon her desk. She could’ve started hand-grading them, but why bother? The scantron machine would grade the tests in mere minutes, and she would be one step closer to her glorious summer alone.

“Have a good summer, kids!” Chairs scooted back with metallic screeches. The excited murmur increased to a loud buzz as the students filtered into the halls. Lockers opened and slammed shut in the distance.

Cassie stood to collect her purse and the tests when she saw a man slip inside the door. “Can I help you?”

He stood tall and erect, towering over six feet in height. His dark hair had just a sprinkle of premature gray at his sideburns. He was probably a few years older than she. Maybe thirty-five or thirty-six. She thought he was handsome. Was he someone’s father? She couldn’t stop her smile until his clear blue eyes met her gaze.

She struggled to swallow the lump in her throat and coughed instead. Her hand tightened around her purse, and her heart dropped to her stomach. Although she had suspected this day would come, she’d hoped it never would.

“Are you Cassandra Richards?” His hand went to his suit jacket, and he produced a badge. “I’m—”

“What department are you with? Roanoke Police? Virginia State?” Her purse dropped onto the desk and scattered pencils and paperclips.

“FBI, actually. I’m Special Agent Timothy O’Conner.” He offered his badge for her to see.

She leaned forward, and her hand shook too much to take his badge. Why did his presence affect her so much? She breathed in to calm her jumbled nerves and read the badge. He was legit. “It’s happened again, hasn’t it?”

“What has happened again?” He placed his credentials back into his jacket and leaned against a student’s desk.

Blood rushed through her veins and created a dull roar. She was surprised he made no indication of hearing her rapid heartbeat. Her muscles tightened, begging her to run, to flee. She sank to the chair and started gathering the scattered school supplies, anything to keep her hands busy.

“I know.” His voice was soft, low, a gentle caress that lured her to look at him. “Do you mind if I show you something, Cassandra?”

“It’s Cassie.” She couldn’t help but correct him. Cassandra seemed so unfortunate of a name. One she identified too well with that mocked Trojan prophetess, who warned the Trojans about the Greeks and their gifts to no avail. She should listen to her own warnings to flee, but she was tired of running from her horrific past.

“You can call me Tim.” He smiled and pulled out his smart phone. “May I? It’s a bit graphic in nature, but I believe you might further confirm something for me.”

No, no, no! Her thoughts spun in circles.

“I suppose,” she said instead. The sooner she did as he wanted, then the sooner he would leave.

He came around the desk and placed his phone before her. His hovering body heat warmed her back, and her cheeks burned. She should’ve shifted away, but she needed that flash of warmth to prepare her for what was in front of her. What she saw chilled her to the bone.

A mutilated corpse rested on a bed of dead leaves. A couple bright white flowers bloomed beside it. She leaned closer and enlarged the picture until she could see the person’s throat. Her hair shifted in front of her eyes, and she tucked it behind her ears. The jagged marks told her more than enough. She bolted from the chair, slamming right into him. He let out a soft “oomph” and grasped her arm before she could run for it.

“Why are you showing me this?” She jerked away and back up until she hit the whiteboard.

He stepped toward her and placed his arm against the board to block her escape.

“What do you want from me?”

“I want your help.” His jaw clenched, the muscles bunching before he relaxed. His thumb shifted and brushed against her arm. It tickled a bit and yet felt reassuring to her.

“Yes.” Tim scooped up the phone and motioned to the picture. “Did the man who killed your friends do this?”

“It wasn’t a man, but a monster.” She saw the disbelieving look on his face. No one found her story credible. Most days, she didn’t either. “It’s similar. Okay? Happy?”

He nodded and tucked the phone into his pocket. “I want you to come with me to Virginia.”

“No.” She crossed her arms. Her body shook, but it had nothing to do with fear anymore. New Haven had declared her a murderer. They treated her worse than cow shit after James, Denise, and Mary’s bodies were discovered. Even when her name was cleared, death threats, slashed tires, and broken windows didn’t stop until she moved back to Missouri.

“You’re the lone survivor, the only one who has seen this killer and lived. Cassie, he’s never been caught and he’s killing again.” He touched her chin, tilting her head to look into his eyes. “Don’t you want your friends’ murderer brought to justice?”

“I want him dead,” she said without remorse. She would do almost anything to catch her friends’ killer, but the monster was still out there. What if it still searched for her? “But I’m sorry. I can’t help you.”

His touch stirred a heat she hadn’t felt in a few years, but she couldn’t do as he asked. Going back just wasn’t an option for her. She skirted around him and snatched her belongings. Tests needed to be graded, so she could enter in final grades. She still had over a week left of work before her summer break would start, and she wasn’t going to let something that didn’t concern her ruin her plans.

“Does your principal know you were in mental institution for a while?” He rested against the whiteboard, hands in his pockets.

She straightened. Because the charges were dropped, her record at Grayson Sanatorium was expunged, or so she thought. She never told anyone.

“That’s not fair.” She whipped around and glared at him. “You’d get me fired from my job. Then what will I do?”

He shrugged. “Come back home. Give us your opinion on this killer, and then you can return to your life here. Since school’s out, I’m sure you can arrange to leave early.”

Her fingers tightened into fists, the nails digging into her flesh. She’d worked so hard to get where she was. That damn monster threatened to destroy everything again. She could still feel its hairy hands around her throat. But she couldn’t go with this agent back to Virginia. Tim O’Conner seemed like a reasonable man. She couldn’t see him really forcing her to go against her will. “I can’t.”

“Miss Richards,” he said, all formal again, “I can insist you’ll go.”

“I said no.” She clutched the purse strap and the stack of scantrons against her chest. They were real. Her life here was what mattered, not the one she left behind almost ten years ago.

“I heard one of the girls who died that December night was your best friend. Which one was it?” His breath brushed against her hair.

“M-Mary, Mary Hart.” Cassie closed her eyes. As if it happened yesterday, winter’s chill nipped at her face. Mary had lost her sandal as they fled the monster. Cassie let loose a small squeak at her memory of her best friend’s whimpers as the creature killed her. She bit her knuckles to keep her emotions in check.

“You know her killer and can help us stop him. Mary needs you.” He produced a piece of paper—an airplane ticket. “Are you coming?”

She looked at the ticket, which would take her to Atlanta and then Roanoke. “You’re a cruel man.”

“I’m a man who gets the job done.” He waved the ticket, his arm brushing against hers. “Do it for Mary.”

She bit her lower lip. Her heart pounded, but she snatched the ticket from his hands. She had to do it. For Mary. “I have some things to settle before I go, but I’ll come.”


In November, we'll have excerpt from the short stories in Women of Foxwick. If you've enjoyed what you've read, consider adding Nightmare Ever After to your Goodreads list here. By the way, I should have Nightmare Ever After published next week, so please check back for purchase links.
Posted by Cherie Reich at 8:00 AM

He wasn't taking no for an answer, was he?

This is great, Cherie! I feel so bad for Cassie. And I like the Tim character as well. Looking forward to reading more. :)

Nice second chapter and Happy B-day to you mom! Have a great weekend.

I love how you mixed the sentence structures. The long ones reel us in slowly and the short ones push us forward like the tick tock and the "sharp, focused. A cop's eyes." Great job.

Ok, I didn't like how much he pressured her, and threatened her job, but I can see he feels he needs to get the job done. I also really liked the "cop's eyes" part that Summer mentioned, and all the description of the interaction between them. I'll definitely be checking back for those links.

I need to make the time to read more of your writing. This is spectacular.

Ooh! Definitely intriguing. Now I'm wondering what happens once Cassie gets on that plane.
Nutschell
www.thewritingnut.com

Have a great weekend!!

So Jaybird is your daughter and it is your birthday? Best wishes Cherie!
He just did not want to give up, did he?