Book Chat: Promo and Excerpt from ONLY IN HER DREAMS by Christina McKnight

We have a special excerpt and promo Book Chat of Christina McKnight's Only in her Dreams. Christina has me at modern spin of a Greek legend. *grins*
Excerpt from Chapter 2

Maxim watched her enter the room through the back door. She looked so different from when he observed her in her dreams. They were not his to control, only to observe--from a distance. Most of them took place before her father died, therefore she appeared as a child of about seven. Gone were the long, stringy brown pigtails, and in their place was a mane of rich mahogany hair that hung just past the middle of her back. The oversized pants and flowered t-shirt were replaced with a pair of skin-tight jeans and a blue polo that read ‘The Queen Bean.’
His first trip to Earth in twenty-two years, and all he could do was stare at the girl he’d watched over for more than two decades. Maybe his brother was right; the Oneiroi weren’t meant to interact with humans. It wasn’t safe--for humans or his kind. This must be why his father, Morpheus, forbade the Oneiroi to pass between the two worlds all those years ago. The temptation was just too great.
She looked up at the clock and then her eyes met his. In them he saw recognition, confusion, fear, and then panic. His thoughts of staying an invisible, silent observer were gone. Her eyes seemed to be drawn to him. It was time to go; he’d done enough damage. Guy expected him to stay hidden and unknown to the girl. He stood and walked out the front door of the coffee shop, determined to find a better way to protect her. 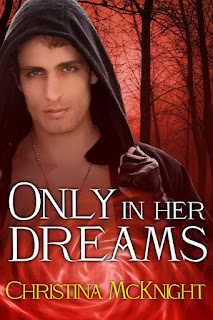 When Lucessa Sarcona awakes from a recurring dream, she has no idea her life is about to be turned upside down. A stranger, familiar to her dreams, shows up in the flesh, and Lucessa knows she’s either crazy or experiencing something not of this world.

A war ensues between three demigod brothers. One, trained to rule Erebos, is violently replaced. One forced to return to his homeland and lead the dream-gods of the Oneiroi. And one is charged with the impossible task of protecting Lucessa. How is she linked to the Oneiroi? Why do two brothers seek to keep her hidden and protected? And how does another plan to use her against the two demigods who love her?

Will Lucessa’s dream man have the courage to claim her as his own or will he bow to the command of another, forsaking the one he loves? 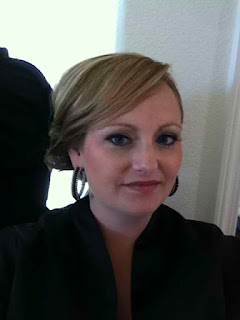 
Christina McKnight is a book lover turned writer. From a young age, her mother encouraged her to tell her own stories. She’s been writing ever since.

In college, Christina took many courses to help develop and enhance her writing skills. She completed a seventy-page dissertation on the need for community policing in American society. Now, she focuses on Historical Romance, Urban Fantasy, and Paranormal Romance. Her debut Urban Fantasy novel, Only in Her Dreams, will be released on September 1, 2012.

Christina lives in Northern California with her husband, daughter, two boxers, two cats, and a Beta fish named Marmaduke.  If she’s not behind a computer screen or book, she’s busy leading her daughter’s Girl Scout troop. She is very active in several writing groups and a local book group.

Email ThisBlogThis!Share to TwitterShare to FacebookShare to Pinterest
Labels: book chat, christina mcknight, excerpt, only in her dreams, promo

That is an interesting twist.

Thank you so much for hosting me on your blog, Cherie!

I'm all about modern takes on Greek legends! Love this :D

I love demigods, especially greek ones. It's one reason I especially liked the Percy Jackson books. Demigods are just fun.

And hey! You won a giveaway on my blog!
http://duckduckcow.blogspot.com/2012/10/music-monday-and-winner.html
Woot! So email me duckduckcow at gmail dot com so I can get the shipping information for your prize.