An Excerpt from HAVEN 6 by Aubrie Dionne and Giveaway

Today I'm delighted to have an except from Aubrie Dionne's Haven 6. This is a great novel, so if you like action, space adventure, alien creatures, and sweet romance, then you just might like Aubrie's New Dawn series.


A Excerpt from Haven 6

Eri stared at the response on her computer screen as reality prickled the hairs on her arms and then sunk like a bomb in her stomach.

Alea iacta est. The die has been cast.

She thought of all the ways to express disappointment in the languages of Old Earth: apogoitefsi in Greek, rozczarowanie in Polish, die Enttäuschung in German, and désappointement in French. Such useless knowledge. Her linguist mind teemed with words, making her the most archaic and impractical colonist on the Heritage.

Not only was her job obsolete, but now she’d never have a computer-designated match.

An oscillating holopicture of her parents’ faces drew her attention. She refused to blame them for her predicament. As an illegal DNA crossing resulting from an unrecognized pairing, she knew the computer would never consider her DNA acceptable for lifemate pairing, especially at her ripe age of twenty-five. Her profile had too many question marks, plus a few propensities for disease.

She should have known from the start. She shouldn’t have persevered, pressing the Matchmaker for a decision she couldn’t make because of the rules. How could the Matchmaker argue with a system that had worked successfully for hundreds of years? Eri’s determination raised her own hopes only to crash them down in the end each time she sent a request.

Well, this was the last time, wasn’t it? She clicked off the screen.

All of the men her age were taken, and the age discrepancy between her and the graduating class was scandalous. She wiped her eyes. If I can’t work within the system, then there must be some way to beat it by hacking into the matching program or changing my genetic report.

Would the Matchmaker catch it? How embarrassing would that be? What would the punishment be?

She scrambled through her desk, overturning broken light sticks and soybean wafer wrappers to find something to tame her hair. Using the black computer screen as a mirror, she clipped her frizzy strawberry curls with tiny plastic clips. How could she let so many hours slip away?

Daydreaming about having her own pairing, that’s how. She shot up from her desk and pulled her arms through the ceremonial blazer of her uniform. The Heritage’s coat of arms badge decorated her left breast pocket. Pressing the portal panel, she watched the particles dissolve like her dreams.

The corridors lay as empty and silent as a barren world. The Guide dictated that all colonists must attend each pairing ceremony. Eri shook her head. She had lamented her own lack of pairing to the point of disobedience. Her boots clunked on the chrome as she rushed through the clear glass corridor connecting her small bubble of offices to the belly of the ship. Stars sparkled like pinpricks all around her. One point in particular glittered like a giant diamond, outshining all the others. The sparkle wasn’t a star. 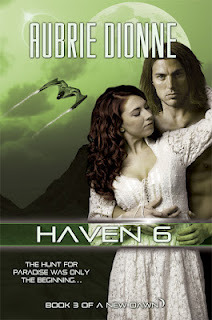 A product of an illegal pairing, Eridani is the only woman without a lifemate aboard the colonization ship, the Heritage, and she is determined her less than perfect DNA will not get in the way of finding love. As the ship nears it's final destination of Haven 6 after five hundred years of travel, images of the surface show evidence of intelligent life on a planet that's supposed to be uninhabited. Commander Grier assigns Eri to the exploratory team to spy on the alien society and return with information on how to defeat them.

When Eri's team lands, tribes of humans attack and Eri is saved by Striver, the descendant of a colonist and a pirate from Old Earth's colonization efforts in other parts of the galaxy. Striver helps Eri rescue her team and they are drawn to each other despite their different allegiances. While Striver battles with trusting Eri, Eri must decide whether to warn him and his people about the commander's intentions, or follow orders and complete her mission.

To purchase on Amazon and Barnes and Noble. Click here to add it to your Goodreads list. 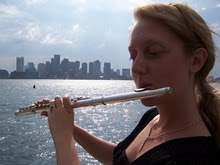 Aubrie Dionne is an author and flutist in New England. Her writings have appeared in Mindflights, Niteblade, Silver Blade, Emerald Tales, Hazard Cat, Moon Drenched Fables, A Fly in Amber, and Aurora Wolf. Her books are published by Entangled Publishing, Lyrical Press, and Gypsy Shadow Publishing. She recently signed her YA sci fi novel with Inkspell Publishing titled: Colonization: Paradise Reclaimed, which will release in November 2012. When she's not writing, Aubrie teaches flute and plays in orchestras. She's a big Star Trek TNG fan, as well as Star Wars and Serenity.

Awesome excerpt! It's a great book.

A great excerpt and a great blurb. And I gotta love anybody who loves Serenity.

Thanks, Christine and MJ!

And thanks, Cherie for posting!

Loooooved the excerpt. Aubrie is definitely talented. Thanks so much, Cherie! :D

Such an interesting premise. I enjoyed the excerpt very much!

That's a great idea, although the other languages gave me a "whoah...I need a universal translater" moment.

It kind of reminded me of Ally Condie's book "Matched" although I know the two are entirely different. Just there's a moment in "Matched" where the main character is also concerned over her pairing.

It's very dystopian and kind of highlights how much pressure there seems to be in our society on those who are single.

Thanks to everyone that commented and read the excerpt!

Congrats on the Ten Tales news, and on completing almost all your Sept goals. Good luck with October's goals - you can do it!! :-)