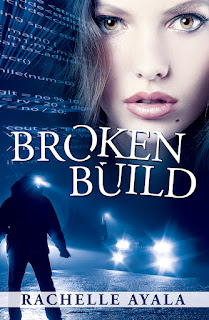 I would like to welcome Rachelle Ayala back to the blog. She's here to talk a bit about her newest release Broken Build, a romantic suspense novel.

Congratulations, Rachelle, on your new release. Broken Build is a romantic suspense mystery taking place in 2012 Silicon Valley, California. Quite a change from Michal’s Window and Biblical Israel. How did you make the transition from historical fiction to contemporary romance?

It’s all a matter of immersion and writing one book at a time. During the writing of Michal’s Window, I studied the Bible, archaeological books and travel guides. It was a foreign culture and time from where we live and harder to reconcile with our current values.

Broken Build came naturally. I worked for over thirty years in the computer industry, from the days of giant CDC mainframes to the magic of cloud computing and server virtualization. The software release cycle flows through my veins. Everyone has seen the glamorous side, the magnetic CEOs, the high flying stock, the Ferraris and Lamborghinis rolling in the parking lots, but who has ever written a book about a release engineer?

Beyond you, I'm not sure who has. What’s a release engineer? I've never heard of it.

A release engineer, or build engineer, assembles the software from its various source code libraries and creates a working build for testing, and ultimately, packaging into a releasable image. These men and women are hardworking and tireless. Imagine the crunch time when bugs are being fixed left and right, and new builds are required to test and verify the fixes. Release engineers typically work around the clock. They are truly the unsung heroes of the computer industry.

How can you write a book about build scripts, config specs, and checksums? A lot of those terms make my eyes glaze over.

Easy. You throw in a sexy CEO, fast cars, stolen code, and an ingenious build engineer heroine, and then mix murder, mayhem and mystery with a blossoming romance.

Ah, that does help. *winks* Your book is certainly entertaining enough without the technology. Why did you put the technical details in?

I structured the story so that a reader does not have to understand server virtualization and release engineering to understand the story. The main plot is love, romance, murder and a dark, hidden secret. Anyone can relate to that. But, as you know, details make the novel more believable and authenticates the experience to the reader. And I did throw in a few bones for those readers who are technical to enjoy.

Very true. Those technical details do add to the authenticity. Any resemblances to real people or situations?

Heck no. Anyone from HR would break their Kindle over this book. Broken Build is meant to be entertaining and dramatic with a sprinkling of comic relief. And gosh! A real build engineer would NEVER tamper with the code. Horrors!

No one wants broken Kindles. *grins* I’m sure people will get a laugh from some of your outrageous characters. I know my favorite one was ahem… quite colorful and unusual. Still want that door. If you ever make millions of dollars from this book, you owe me a door, got it? *winks*

That’s so true. Broken Build is a great read. Congratulations!

Make sure to tell everyone to buy my book! 99c introductory pricing, one penny less than that bag of Cheetos from the vending machine. What a deal!

Hehe! Cheetos sound expensive out in California, but Rachelle's right. You can't be a great book at the introductory price of 99c!

You can find out more about Rachelle at her Amazon Author Page.
Posted by Cherie Reich at 8:00 AM

Hey, I'd probably be able to follow most of that book!
Congratulations, Rachelle.

Congrats on your new release! I'll have to go and buy it instead of cheetos. lol. btw, my hubby and my father are egineers, but I've never heard of release engineers either.

Thanks Cherie, Alex, and Terri. The big grab bag of Cheetos is most certainly $1.00. :) And release engineers live on Cheetos, well, anything out of the vending machine.

I always made friends with the release engineer. They can help you sneak in a change, or patch in a fix without your manager knowing. ;)

This sounds like a really fun read. Going to add it to my TBR shortly :)

Great interview, Ladies! I'm a little late in the game, but I can still appreciate it. Congratulations on releasing "Broken Build," Rachelle:-)

Rachelle, I like the answer to this question: "How can you write a book about build scripts, config specs, and checksums? A lot of those terms make my eyes glaze over."

I think it's clever and shows an author who knows how to create a good story.

thanks for your comments. Broken Build will be free on Amazon Oct 8-10. If you haven't picked it up already, now's your chance. :)