Aubrie Dionne is one of my dearest friends and my critique partner, so I'm thrilled to share the cover reveal of book one of her YA Science Fiction Romance series! Personally, I also think this is the most gorgeous cover of all of her novels to date. 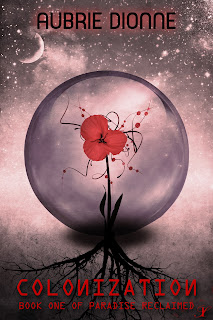 Finding a new home has never been so dangerous.
Andromeda has spent all seventeen years of her life aboard a deep space transport vessel destined for a paradise planet. Her safe cocoon is about to break open as Paradise 21 looms only one month away, and she must take the aptitude tests to determine her role on the new world and her computer assigned lifemate. As a great-granddaughter of the Commander of the ship, she wants to live up to her family name. But, her forbidden love for her childhood friend, Sirius, distracts her and she fails the tests. The results place her in a menial role in the new colony and pair her with Corvus, “the oaf”.

But when Andromeda steps foot on Paradise 21, her predestined future is the least of her worries. Alien ghosts from a failed colonization warn her of a deadly threat to her colony. And when Sirius's ship crashes on the far ridge in an attempt to investigate, she journeys to rescue him with Corvus.

Andromeda now must convince the authorities of the imminent danger to protect her new home. What she didn't expect was a battle of her own feelings for Sirius and Corvus.
Can she save the colony and discover her true love? 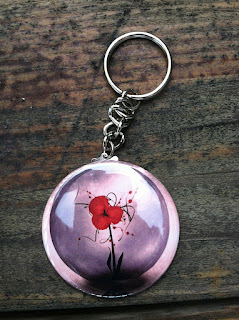 And there is a giveaway! – Open for US and UK only.
We have a very cool keyring as a giveaway. (I really want one for myself too. I heart keychains!)

It's so pretty and all the different shades of red look so beautiful!

Sana @ artsy musings of a bibliophile

I completely agree! I love this cover!

Sounds cool! How wonderful to be experiencing success together!

The cover is really cool!

Ooh, lovely! And the keychain is an awesome idea.

Sweet! The cover is really cool.

I'm going to point out that the Ns are reversed just in case it is a mistake and not intentional. If it is intentional, then never mind. :)

Awesome for Aubrie. Great cover. Love the keychain. Will have to put this on my TBR.

Great cover. Wow, she's been on the ship all her life, and now is going to be on planet. That would be overwhelming.

I think I agree with you about this being Aubrie's most gorgeous cover!