Promo Monday: The Kingdom of Arnhem series by Nicole Zoltack Title: Woman of Honor, Book One of Kingdom of Arnhem series

The threat of war with the Speicans is a constant threat, and one that grows more frightening as she and Caelan train toward their eventual knighthood. Aislinn has committed herself to serving Arnhem, and has promised herself as King's Champion when Caelan claims the throne. She is willing to give up everything... her childhood, her life, even her heart for Arnhem. No matter the pain it brings.
To read my review, click here. Title: Knight of Glory, Book Two of the Kingdom of Arnhem series

Author: Nicole Zoltack
Publisher: Desert Breeze Publishing, Inc. (March 2010)
To Purchase: Desert Breeze Publishing
Book Description: Sir Geoffrey, along with some companions, has been sent away from Arnhem, entrusted by Queen Aislinn for a special mission, and has to leave behind the mysterious lady Celestia. On his journey, he uncovers seeds of a sinister plot, learns a horrible secret, and makes a new friend in exile Jenanna.

Rumors abound that the Speicans have enlisted a mage of their own, to work unspeakable, forbidden magic. The war between Speica and Arnhem has just begun. Will Geoffrey survive the battle to live another day and discover which woman he truly loves?
To read my review, click here. 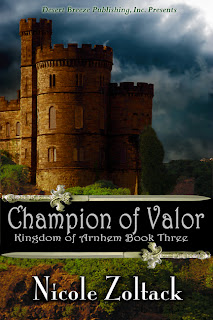 
Book Description: The Mystical Conch Shell of the Sea has been stolen, and it's up to Selliki, the selkie, to get it back. Selliki sets across the continent of Alethereia to find Arnhem, and Gabrael, the mage she loves. Selliki knows that no union between a selkie and a human have ever had a happy ending, but neither can ignore their feelings. Each night, they experience terrible, real dreams that show how doomed their love is.

The final war between Speica and Arnhem is threatening the entire world. Lucifer has aligned himself with Speica and wants nothing less than to bring about the Apocalypse before its time. In the last battle, cowardice is revealed, promises are broken, and many people die. Trolls fight icthyocentaurs, dwarves armed up against the Drow, angels against demons. Only one kingdom will prevail; that is, if the world doesn't end.

Stay tuned tomorrow when I announce the winner of Nicole Zoltack's Woman of Honor and the winner of the notecards/other great gifts Nicole is giving.

I wish Nicole the best of luck with these books. I'll check out your review.

Yup, they sound intriguing and I do love those covers!

Sound great! Much luck to Nicole!

Congratulations and best of luck to Nicole! The covers are gorgeous!

Love these covers! And they all compliment each other so well.