Personal Thursdays: How my cat is like Adrian Monk 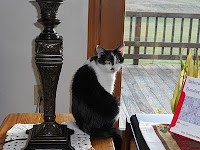 I don’t know how many of you watched Monk when it was on TV, but my mom and I really enjoy it. We’ve watched it in re-runs, since we don’t have cable. The more I watch the show, the more I realize my cat Cinderella is very Monk-like.

1. She has a phobia of germs. If someone touches her, she immediately has to lick off those germs as fast as possible. Can we say towel wipe?

2. She’s pretty picky about her food. Doesn’t like milk, but she’ll eat cheese. She loves bread. Unfortunately, she prefers Romeo’s kitten food to her own.

3. She solves crimes. No, really she does. She has a feather toy she loves. I can put it anywhere in the house, and she’ll find it. Even when I hid it in the closet, she found it (with the closet door shut).

5. She’s a bit terrified about people.

7. If she could see a shrink, she would, but she’d also have a phobia of seeing one.

9. She also has to touch things sticking out, like a finger or the corner of a couch cushion.

Monk wouldn’t probably like her, especially since she has her little smudge on her nose. He’d want to wipe it off. Plus, he doesn’t seem like much a cat person, but they have their similarities.

Even though she may be a bit crazy, I love her.
Posted by Cherie Reich at 8:00 AM

Maybe your cat will get her own show as well!

*LOL* That was great! I use to watch the show all the time. I even have a signed script because my cousin was an accountant for the show during its first season.

I've had two black and white cats and they were both totally nuts! I think it has something to do with the colour combination.

I love your cat!

That was my mother's first blog post! We tried to post it Thursday night, but blogger crashed, hence the delay. She loves Monk and enjoyed reading your comparison=)