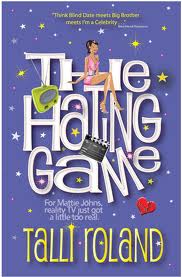 Title: The Hating Game
Author: Talli Roland
Publisher: Prospera Publishing
To Purchase: http://www.amazon.com/Hating-Game-Talli-Roland/dp/1907504036/ref=sr_1_1?ie=UTF8&s=books&qid=1300121986&sr=1-1
Book Description: When Mattie Johns agrees to star on a dating game show to save her ailing recruitment business, she's confident she'll sail through to the end without letting down the perma-guard she's perfected from years of her love 'em and leave 'em dating strategy.
After all, what can go wrong with dating a few losers and hanging out long enough to pick up a juicy £200,000 prize? Plenty, Mattie discovers, when it's revealed that the contestants are four of her very unhappy exes.
Can Mattie confront her past to get the prize money she so desperately needs, or will her exes finally wreak their long-awaited revenge? And what about the ambitious TV producer whose career depends on stopping her from making it to the end?
Review: Talli Roland’s The Hating Game explores a new twist on the dating game. Mattie Johns is a man-eater who would do anything to save her floundering business, including going on a game show. When she finds out the contestants are former boyfriends, it raises the stakes, and she must decide between money and a second chance at romance. During the game show portion of the book, I cheered on a certain contestant to win as if I was really watching a game show. Ms. Roland made me believe in the change of heart Mattie had. The Hating Game shows how messy relationships, even former ones, can be. The novel is witty and fun, and each character adds to the drama and entertainment. The little relationship facts at the beginning of each chapter are an added bonus. Ms. Roland has written a fantastic and fun romance. I look forward to seeing more from this author.
By the way, if you haven't visited Talli's blog, you should.

Aubrie - Happy Monday to you too. It was a fun read. I look forward to her next book.

I love Talli, her blog is awesome.

This sounds like such a fun read. I wonder how I'll get my grubby little paws on it...

Yay for Talli! I had a great time reading about Mattie's adventures.