Today, I'll be promoting another Emerald Tales issue, "Winter Solstice." My story "Io Saturnalia" is in it, and it is the first story I've had published in print and my first story I received payment for. 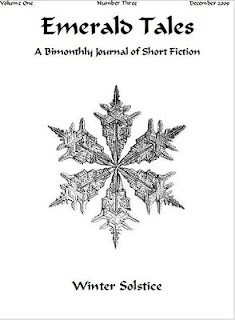 Emerald Tales, Vol. 1, No. 3 "Winter Solstice"
Publisher: Scribblers and Ink Spillers (December 2009)
To purchase:  http://www.scribblersandinkspillers.com/emeraldtales.html
The electronic version of the issue is free, but please consider a donation.

All stories and poetry in this issue had to revolve around the winter solstice.

Here is the blurb from the website:
A couple are reunited on Winter Solstice; a slave has a day of freedom on Saturnalia; a worker at a crisis line has a scary drive home in the snow; an eight-year-old boy gives his great-grandfather the best gift of all; a young trapper discovers a gruesome scene at his neighbors cabin; a young boy and his grandfather must avoid a Viking raiding party; a teenage girl records the last seven hours before the arrival of the Centaurians on Earth; and a young woman encounters the not-so-grim reaper.

Here is the blurb for my story "Io Saturnalia": As a Greek slave for the Roman Lucius Valerius Corvinus, Hermes has always longed to be free. During the festival of Saturnalia, his master grants him his wish with a price. Hermes, a scribe, has to come up with 700 sestertii for his freedom. When the slave travels to the sigillaria or special market, he comes across an Etruscan fortuneteller. She guarantees his freedom, if he doesn't tempt the Fates. With magical knucklebones, the Greek scribe seeks out his destiny.

November is the last month to read the "Winter Solstice" issue, since this issue will soon be out of print. So, go now and read some great stories.
Posted by Cherie Reich at 8:30 AM

That's too bad it will be out of print! Does that mean you can use the story elsewhere?

Yes, it does mean I can send the story elsewhere, but only to places that accept reprints. There aren't many of them. I might end up giving it to Raven and the Writing Desk someday or just posting it on my blog or website for people to read. I don't know.