What If It's All About Love #IWSG #SpecFic

My biggest insecurity this month is getting back on track with my rewrite/edit of Forged (The Fate Challenges #2). When I was working on the rewrite, everything was going well. I often was hitting 1,000-2,000 words per session, and I felt like what I was writing was shaping up into the novel I hope Forged will end up being. Unfortunately, I didn't get that many days to work on Forged during January, so I only rewrote 11,000 words instead of the 20,000 I was going for. So somehow I'm going to have to increase my pace because I would really love to have this rewrite finished by the end of April. Wish me luck!

February's question: What do you love about the genre you write in most often? Is everything an acceptable answer? I write speculative fiction, which is a fancy umbrella term featuring "what if" scenarios often in the genres of fantasy, science fiction, and horror. I suppose if I had to pick one thing I love about the genre is the ability to create new worlds or modify the ones existing around us. I can let my imagination run.

What is your insecurity this month? What do you love about the genre you write most often? 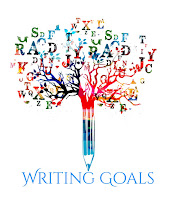 Though I did only rewrite 11,000 words in Forged instead of 20,000 words in January, I did finish a critique of my critique partner's newest novel.

I only have one main goal for February, which is rewrite/edit 20,000 words in Forged, which will put the manuscript up to 31,000 words (or about a third finished).

What are your goals for February?

Also, I'm hosting a monthly giveaway where one person a month has a chance to win one of my ebooks. You can enter the giveaway here.
Posted by Cherie Reich at 8:00 AM

Hi Cherie, hope you finish the rewrite of Forged by April. I'm very eager to read some speculative fiction novels. Any book recommendations?

You can do it! Hit the ground running. Or rather, hit the page writing.

Good luck with your goals and picking up your pace. My goal is to go to WriteOnCon, an online writing conference, this weekend, and get some writing done for me because the play that I am producing and running Front of House for with my boyfriend has it's first show on 2/22. It'll be busy until early March.

Running imaginations are both dangerous and fascinating. I say, let them run. Speaking of which, I'm wishing you epic success with your goals. You've got this!

My editing for others dominates, too. But that comes with the territory for me.

You can do it! I love playing with those what if questions in SpecFic too.

Good luck with your rewrite! Sometimes life gets in the way, but any new words written or progress on editing and rewriting is better than doing nothing at all.

Wishing you the best of luck with your writing. I wish I had gotten as much writing done in January as you did! Wow! :)

Good luck with your rewrite! You can do it!

I don't do well setting goals. I write, edit, start over, finish, edit. I have a long goal of when I want to finish the book (which I share in my blog sidebar) but that's it. If I don't make it, I adjust it! I like that goal-setting works for you and lots of others, though.

Good luck with your new goals. I love the 'what if' of speculative fiction too for reading and writing.

Good luck with getting your rewrites done! My fingers are crossed for you.

I'd say you still did pretty well on your word count. Well done!

I love the world building too. Possibilities abound!

Even on a not-so-good month you do great. I wish I had your drive. :-)

Best of luck with your rewrites! You're still rocking it more than me. :)

Cheering you on. I know you will reach your goals.

Wishing you all the positive writing mojo in the world! I answered this month’s posed question much like you did. Everything... :D

The endless possibilities are why I like fantasy and science fiction so much.

Good luck on the writing!

I think 'everything' is a fine answer when the question is what you love about your chosen genre.

Good luck with your re-writes, I'm sure you'll achieve your goal this month!

I love speculative fiction, Cherie. I like how you wrote it's like an umbrella term, so true. I'm wishing you much luck and hope you get your edits all completed by April.

As you know, I write fantasy. Everything is a good answer :) But if I had to distill it down I would simply say magic. Magic makes everything better!

The fantasy thing is so freeing! Hey, I say as long as you worked, it doesn't matter how many words you got. You created something. That's all that counts!

11,000 is better than nothing! Hopefully you'll get some more work days this month than last month :-)

My insecurity at the moment is the fact that I'm working on a brand new series and I'm constantly aware at the back of my mind that readers WILL (whether intentionally or not) compare it to the series I've recently completed. Of course, I hope they'll love the new one just as much as (or more than) the old series, but I know I can't make everyone happy!

Monthly goals: Continue querying the historical novel, continue writing the new contemporary novel, and either locate Kindle or give up and buy a new one. Argh.

Good luck on your re-write goals.

Hooray for speculative fiction. It is my favorite genre too: to read and to write. So many of us, IWSG members write in it. Keep going, Cherie, and you'll hit your goal by April.

Sorry your rewriting plans were derailed a bit in January. Know too well how depressing that can be! (I never seem to achieve anything in the timeframe I hope to, anymore.) Hope the next few months go more smoothly for you, so you can meet your April goal!

And completely agree with you about speculative fiction. Those "what if" scenarios are always fun to dream up!

You will get Forged done. I have every confidence.

That's the reason I love speculative fiction, too. I love weird. It lets me get really weird. lol

Sounds like you're in a great flow with your rewrite so I'm sure you'll meet your goal. Impressive stats for the year already! I also enjoy the freedom to explore all sorts of worlds with spec fic.

I write romance so my favorite thing is the HEA. ;) Best of luck hitting your goal!

Wishing you all the best with your writing!

You're doing great! You'll get it all done.

I've never written speculative fiction, but I bet it would be fun answering, "What If" questions.