The fate of Eternity depends on low-level reaper Lana Harvey in Angela Roquet's Graveyard Shift. If the after life is anything like Roquet's Eternity, then sign me up. The basis of the world revolves around all religions being right, to some extent. Human belief makes the divine, and those who run in the soul reaping trade reside in Limbo City along with a variety of characters ranging from souls, to gods and goddesses, and even demons and angels. Lana Harvey enjoys breaking the rules and remaining as a low-level reaper, but others' decisions force her to change and grow as a character. Roquet makes every character come to life, and I found myself laughing a lot while reading the book. The tension keeps the story moving at a fast pace. Graveyard Shift by Angela Roquet is unique and refreshing, and I'm looking forward to reading the next book in the Lana Harvey, Reapers Inc. series.

Jill Russell seeks Bigfoot, but she finds the hot nature photographer quite a distraction in Christine Rains's Big Longing. A Forest Service employee and Sasquatch hunter, Jill seems uncertain of herself, especially when it comes to men. I loved how Jill didn't realize how much Theo liked her at first. Despite the fun and hot sexual encounters, Jill and Theo's budding relationship has a sweeter side to it. Rains knows how to toss the hero and heroine into a world of danger too. I thoroughly enjoyed seeing the characters from the first Sasquatch Susies series as well as another taste of Our Guy (Bigfoot). Big Longing by Christine Rains is a fun, quick read perfect for people who like a splash of paranormal with their adult romances. 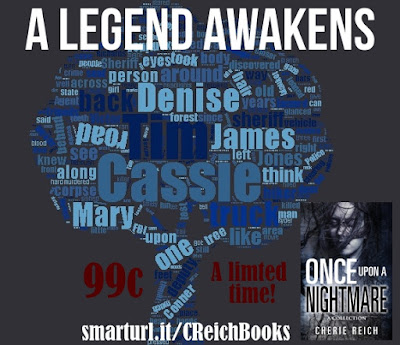 I'm over at the Parallels' blog again for Q in this year's A-Z Challenge with another excerpt from "Folds in Life and Death." Also, on April 23, Sandra Cox and I have a joint post for T.

A special thanks goes to Tamara Narayan whose P word for A-Z was Paperist, a term I created for "Folds in Life and Death," as well as Michelle Wallace who mentioned Once upon a Nightmare for O along with two other works.
Posted by Cherie Reich at 8:00 AM

These two reviewed books sound like good reads. And I enjoyed Once upon a Nightmare, especially the first story. My parents live in the mountains of N.C. and I've been on roads that sound just like the one in your story.

I loved the word, paperist!

Thanks for the reviews! My TBR list just keeps getting longer.

I signed up for the Thunderclap. Less than two weeks now!

Christine's book sounds great. It's always fun to see what you're reading.

Thank you for the reviews Cherie. I can always count on you to increase my must read list :) Keep them coming :) Nearing the end of Yolanda Renee's book and loving every step of the way. Off to bed now to try and finish it. Have a lovely week.

I've joined the thunderclap, or at least I think I have. Better make sure after this comment. ;)

Love these reviews! Your new word is awesome too. :) Thanks for sharing.
~Jess

I signed up for your thunderclap and that was a great blog piece for Q. Fantastic reviews. I'd like to read Christine's book.

Graveyard Shift sounds fun. I am reading Big Longing now - it is super fun and sexy! I signed up for the Thunderclap as well. Lots of fun stuff going on.

Thanks so much for the awesome review! Hope you're having a good week. :)

You're impressively busy with all the reviews, book sale, Parallels blog post and the many many releases coming in May. Thanks for all the info!

Woot for Christine! I'll have to check out that Reaper series. I'm reading Witch of the Cards right now.

How exciting about the $0.99 sale! Also, great reviews! I really need to catch up with Christine's books one of these days. Her writing is always fab!

Ha-ha, paperist. Sounds like someone who deals with a lot of paper. Is there an occupation that deals with a lot of actual paper anymore these days? I know I used to back in the 90's when I worked as a filer. It would have been fun to call myself a 'paperist' back then, lol.

Congrats to Christine and Angela. And to you for being such a prolific reader!!! LOL.

You are all over the A-Zs!! Congrats!

Oh, both of those books sound so good! *looks at TBR pile* *weeps*

A couple of wonderful books! Thanks for sharing. Hope your sale went well.