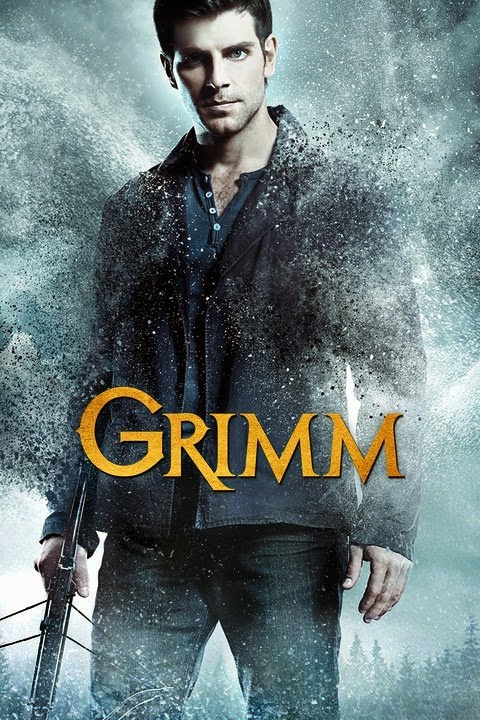 I have fallen in love with NBC's Grimm. It's part detective show and part supernatural goodness. The premise is that the Grimm Brothers' fairy tales are true. Grimms stop Wesen, people who can transform into a beast, but not all Wesen are bad, of course. Or Grimms.

I came into Grimm late. When the show first premiered in 2011 our NBC station was spotty, so we often didn't watch anything on NBC. A year or two later, we purchased a new antenna and were able to get that station again, but it wasn't until the start of Season Four that I watched Grimm live, so to speak. I used Amazon Prime to watch Season One of Grimm and was into Season Two when Season Four came on TV. Last November, I purchase Season Two and Season Three and was all caught up before the end of December.

I've always been a big fan of detective shows. Add fantasy elements, and I'm so there! Plus, I love there are scary moments and humorous ones. Nick Burkhardt is a Grimm and a homicide detective, and his partner is Hank Griffin, who is a regular human. Most of Nick and Hank's cases are Wesen-related. Within the first couple episodes, I had developed a soft spot for Monroe, a lovable quirky clock repairer who happens to turn into a ferocious Blutbad (wolf). He and Rosalee (a Fuchsbau--a fox-like Wesen) are adorable. Sergeant Drew Wu (yes, I laughed when I learned Wu's first name was Drew and rhymed) has turned into a great addition to the Grimm team. Captain Sean Renard is sexy and mysterious, and I'm still not 100% certain I trust him. Nick also has an on-and-off relationship with Juliette Silverton, who works as a veterinarian. I could say many more things about Juliette based on what's gone on recently in this season, but I'll try not to spoil the show for those who haven't seen it yet. And I must not forget Bud, an eisbiber, who always makes me smile.

And the last episode of Season Four... Wow! Let's just say certain persons totally had it coming to them, even though the last one made me more than a bit sad. It still had to happen, especially since that certain someone torched the trailer.

What excites me the most about Grimm is their use of fairy tales, myths, and legends to create Wesen. The world-building is phenomenal. They make terms like Wesen, Blutbad, Fuchsbau, Hexenbiest, and more common place to us Grimmsters. I look forward to Friday nights, not because of the weekend, but because of Grimm being on.

And they've been picked up for a fifth season, which should be darker than the seasons before, although I hope they keep some of the humor too!

Have you seen Grimm? Are you a Grimmster?

A reminder: The full covers of Reborn and People of Foxwick and Their Neighbors have been nominated on Cover Cafe in the Two-Image Cover category. Voting takes place May 5-May 25, and you do have to vote in three separate categories for the vote to count. Thank you!!

Read from the beginning, Part III, or Chapter Twenty-Five.
Posted by Cherie Reich at 8:00 AM

I've watched a few episodes, but I already have too many shows to keep up with.

I'm not sure if I've watched that one or another one...I watched the first episode of that show that has the woman who used to be on House. Is that Grimm?

That was an absolutely epic season finale for Grimm. I really didn't think they'd go there, but the last 3 episodes played out beautifully. Really, some of the best TV I watched all year.

I do wonder if it's permanent (it wouldn't be the first death they reverse), but I hope so. It was big, it was epic, and it was significant - please don't ruin it. :)

I love fairy tales! Love, love, love them. But it seems that every time there's a fairy tale show on TV, and people urge me to watch it, I end up feeling a little disappointed. I didn't like "Once Upon A Time" (though to be fair, I only watched a few episodes). But I haven't tried Grimm yet...maybe I should! You've convinced me!

Everyone in Oregon watches Grimm. :) I felt they jumped the shark in the last show. It didn't seem right to me... the character actions didn't match what I knew of the characters up to this point.

I love this show too, though I'm sad how a certain character changed this year. This series really has grown on me. It's one of my favorites.

I haven't checked out Grimm. It sounds like something I'd enjoy. That and Once Upon A Time, but like most TV shows, I pass over them to get writing done.

I LOVED the concept of Grimm and was so excited when it premiered, but for the most part I felt the execution was lacking. I ended up checking out after the first season. But from what I've read around the interwebs, it seems like the quality really improved in the later seasons, so I've thought about circling back around and catching up.

I watched the first couple of seasons of Grimm, and then fell off because I got too busy. It'll probably be one I pick up again, now that Backstrom and Forever have been cancelled.

I haven't seen it, but maybe I'll give it a shot! I also like the blend of those two genres.

Never even heard of Grimm, but it does sound awesome. :-D

I haven't seen it, but now I'd love to. I don't watch much TV. I usually binge watch episodes on Amazon if I fall in love with a show, and usually years after a show first came on.

I've seen it a few times, but it is one of those shows that one day I'll have to watch on Netflix. Just like I've never watched all of Dexter or Fringe! So many great shows, so little time. :)

I have not see any episodes of Grimm- but I have heard great things about it. I am glad to hear you are a fan too! I have been wanting to watch it for ages- so I am hoping to catch up with it at some point. Maybe I can get in all 4 seasons before the next season starts. Sounds awesome!
~Jess

I've never seen Grimm, but have heard of it. As much as I love speculative fiction, I can't seem to get into TV with speculative elements. My favorite shows are all realistic, although Reign likes to use witchcraft occasionally. Anything historical works for me because I love being able to visually see the historical images.

I must check out Grimm!!! It sounds great. Right now I am bummed that we don't get Showtime, thus no new Penny Dreadful for me right now. Bwah.

I haven't seen it but my friend LOVES it. it sounds so good!

I love Grimm. It is one of my top favourite shows. I love the characters and the plots and just about everything about it.

I haven't seen GRIMM yet, but after reading this I might have to get on board. Thanks for highlighting it!

It sounds like an awesome show. I'll have to check it out . . . behind the times, as usual.

Not a Grimmster, but I believe the show is right up my alley!