There are a lot of insecurities we writers can have, but I implore you to keep writing, keep learning your craft. If you give up, then you'll never become the writer you're meant to be. 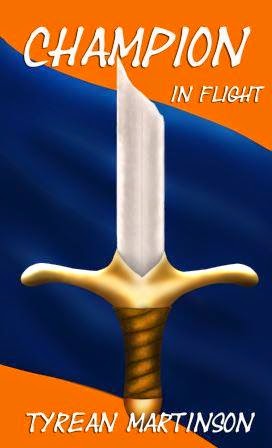 Tyrean Martinson lives and writes in the Pacific Northwest. Dragonfold and Other Adventures, and Light Reflections showcase her short stories and poetry. She is currently at work on the third novel of The Champion Trilogy: Champion’s Destiny.

Today's the first Wednesday of the month, so it's time to put up another chapter of Reborn on Wattpad. You can click here to start at the beginning or click here for Chapter Two.

For today's Reborn Blog Tour, I'm at these places:

Today's Reborn tidbit: The Great Beyonders, or Norvadians, come from beyond the Great Mountains. They are descended from the mating of humans and elves. Great Beyonders have magical abilities. Their skin is blue in color, and they are known by their white-blond hair and pale blue eyes. The idea of the Great Beyonders comes from my love of Norse mythology, yet their skin tone comes from two places: the blue people of Kentucky and a guy calling me a blueblood. In Biology, I was fascinated that there were actual people who had blue skin (blue people of Kentucky). This genetic deformity stuck with me. Then, I had a guy call me a blueblood. My skin is very fair, so sections of it almost look blue from my veins. When I thought of a people who live where the sun rarely shines and how fair they would be, I was led to the Great Beyonders and what they would look like.

Great IWSG advice. And I am hitting myself over the head because I totally forgot about our UR giveaway!! I swear I think I need a year long vacation to get my head working again.

Sam and Heather - two of my favorite bloggers! Will be visiting later.

How did I miss your blog tour? Will check it out. Major congrats! And YAY for Tyrean. I've seen this book a few other places, too. Woot!

Great advice. I never did get the hang of Wattpad. Went there, looked around, got confused, and left.

I remember a post about the blue skinned people ages ago, and now its in your published book congrats!

Thank you for the kind comment on my blog! And I agree with never giving up. Write away!!

Giving up is the only way you can guarantee failure. Congrats again to Tyrean. And keep up the great job, Cherie.

Never giving up is such important advice. I don't think we can ever hear that enough.

And I definitely have to check out that post on debut insecurities.

Never giving up is so important! If you do, then you'll never see how the story ends.

I'm happy to host and will definitely check out Heather's blog too! I couldn't get the giveaway link to work on mine. Sorry about that. :(

That's a great message, Cherie! And one we can never hear enough. :)

Great advice. Thanks for sharing.

I don't plan on ever giving up.

The biggest advice given by my first literary agent: Keep writing. =)

You're posting on Wattpad, eh? I keep trying to get into the platform, but I just can't find the time. *sigh*

Awesome advice! And cool tidbit for the day. I had no idea there are blue people in Kentucky.

I've been through too much hardship to give up now. The world would have to end at this point, lol....

People can come up with blue-skinned characters for so many reasons, but YOUR reasons are the best I've heard. I always forget about the blue-skinned people of Kentucky. Seriously, that is so cool!

All the best with your blog tour, Cherie!

I tried Wattpad but fell into the dust bunnies. I hear it's better for the young reader. You should do well there.

Congrats to Tyrean and yourself.
And your advice is my favorite: don't give up.

Great message here. Congrats to Tyrean. I've been seeing your book and hers everywhere.