Book Chat: Excerpt from The Ghosts of Aquinnah by Julie Flanders

Untethered Realms author Julie Flanders is here today with an excerpt from her newest novel The Ghosts of Aquinnah. Congrats, Julie!

The Ghosts of Aquinnah Excerpt

As Hannah sat in total silence in her Boston bedroom, she felt as if she could hear the pounding of the surf on the rocks along the shore. After what felt like an eternity, the woman on the camera turned away from the sea and once again headed towards the stairs. She quickly climbed them and stood right below the camera, glancing around at the empty stores and restaurants and periodically looking towards the red brick lighthouse at the top of the cliffs. Hannah expected her to head up to the lookout as she had each of the previous times she had seen her, but instead the woman continued to stand directly under the camera.

She grabbed her cloak and pulled it more tightly around her small frame, and looked up into the camera lens. Hannah sat back in her chair, dumbfounded. Surely she wasn’t…

She was. The woman stared directly into the camera and right at Hannah. Hannah could see strands of auburn hair peeking out from under the woman’s bonnet. The bonnet framed a pale face that was drawn and filled with sorrow. Seemingly oblivious to the rain around her, the woman continued looking at Hannah and, as their eyes met, Hannah felt as if all the air had left her room.

The woman raised a petite hand to push her hair out of her green eyes. She blinked, and turned away from Hannah to once more stare out at the sea. Before Hannah could breathe, she was gone. 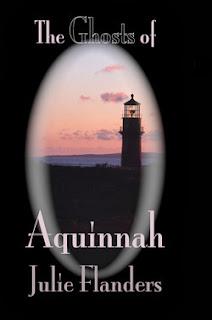 A brilliant flash of light transcends through time.

Another freezes a cloaked figure within a frame of salty mist as waves crash against a rocky shore. Her harrowing expression shadows the beacon to a pinprick.

By the next blaze, she is gone. Only the lighthouse remains.

Hannah’s eyes blink in step with each heartbeat. Images of her deceased parents and Martha’s Vineyard explode like firecrackers inside her mind.

She shakes her head.

For weeks this eerie woman dressed in nineteenth century garb has been haunting my webcam, but tonight she stared into my soul.

Casting aside months of research on historic lighthouses, Hannah drives to the coast and boards a ferry.

What is the strange connection she has to this mysterious woman suspended in time?

But, it’s not at all what she expects... 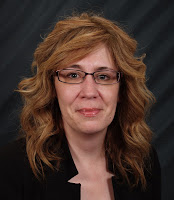 Julie Flanders is a novelist and freelance writer in Cincinnati, Ohio. She has a life-long love affair with the ocean and has spent more summer vacations than she can count on the island of Martha’s Vineyard. When not writing, Julie can be found playing with her pets, reading, cheering on her favorite sports teams, and watching too much television. The Ghosts of Aquinnah is Julie’s second novel. Her debut novel Polar Night was released in February, 2013 by Ink Smith Publishing.

The Ghosts of Aquinnah will be released by Ink Smith Publishing on December 5, 2013. Order now at Amazon ~ Barnes & Noble ~ Smashwords ~ Ink Smith Store
Posted by Cherie Reich at 8:00 AM

Thanks again for having me here, Cherie!

This time she saw Hannah!

Thanks for sharing the excerpt! :) Intriguing... Congrats, Julie!

Thanks Alex, Melissa, and Cecilia!

Good luck, Julie! Judging from the excerpt, your book is gonna be a real winner. (So technically, you don't NEED "luck"...)

I found the story of Stella and Christopher really gripping. Julie kept me up several nights with that one. My only complaint is she doesn't have another book written yet. :D

What a great excerpt. Congrats on the upcoming release!

Great time for a new release, congratulations! Love the excerpt - sounds awesome and a ghost story I'd love to read!

Fantastic excerpt! This is a fantastic book. :) Way to go, Julie!

Loved the excerpt! This sounds like such a good book! Great cover, too! Best of luck to Julie!
~Jess

All the best, Julie! Hope your book does well. :-)

Absolutely loving this excerpt! Julie's first book was fantastic, so I can't wait for this one!

You guys are all so nice, thanks so much!! And thanks again Cherie for hosting me! :)

It looks like Julie's done it again and produced a super read. Congratulations, Julie.

Such a mysterious excerpt. I'm hooked! I want to know everything about the woman in the bonnet. :-)